It’s winter wonderland in the bootheel!!! 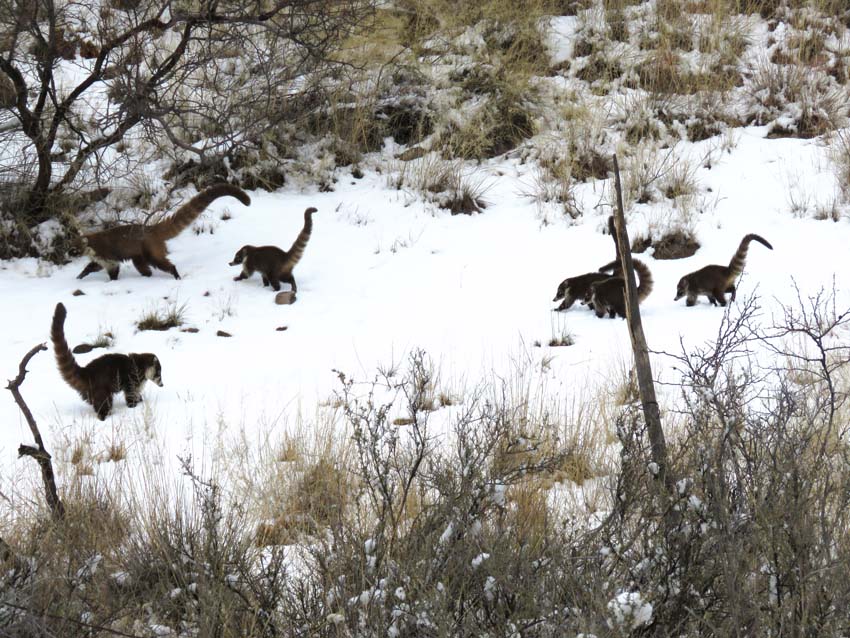 Posted at 23:42h in sightings by EdNewbold 0 Comments
0 Likes

The shot above shows Coatis frolicking in the snow across from the house here in the Peloncillo Mountains of New Mexico, which are located in the extreme SW “bootheel” of New Mexico. Coatis are related to Raccoons but  bigger, much redder, and much longer tailed. They are built somewhat for digging in the dirt with their sharp claws so we don’t try to pet them.

In fact the males like this one, which are called Coatimundis, can be imposing.  CD Littlefield, the resident wildlife biologist here, says the Coatis didn’t range into the US until 1891.  That was the year the short-grass-prairie regime was broken after the US government essentially encouraged overgrazing. “You were never out of sight of a dead cow in the bootheel in 1891,” CD told us –though not from memory: He wasn’t born until 1892! (Just kidding CD). The Coatis apparently hopscotched North moving from one cow carcass to the next.

But I digress from the topic, which is the snow we’ve been getting down here, about 3 snowstorms that dropped about a half a foot each. Snow melts fast around here usually except from the north-facing slopes but it makes for a nice winter wonderland after a dump. This was Dec 28 looking down-canyon toward the Chiricahua Mountains of Arizona.

On Dec 30 we did the Peloncillo Christmas Bird Count. To get to our “territory” we have to head in from the Animas Valley that flanks the eastern side of the Peloncillo range. We drive west to Route 80, north past Rodeo, New Mexico and east to the town of Animas, then drive in 2 miles on a very primitive road about two miles.  The view above, looking west to the Peloncillos, is where we started hiking and counting birds. The mountain on the left is Baldy, on the right is Black Mountain, (it’s covered in junipers) but we renamed it white mountain for the day.

in the Peloncillos we had scattered Bluebirds roving around, (There are two Western Bluebirds in this shot) along with Townsend’s Solitaires,  Sage Thrashers and Phainopeplas on occasion.  We ran in to a glamorous Williamson’s Sapsucker in a spot were we had one before, eight years ago.  (Other birds also, including a Golden Eagle and many Rufous-crowned Sparrows, a few Western Meadowlarks, plus others).

We hike in as far as we can into the Peloncillos. But it’s usually worth a look back over your shoulder on the way in. This is Big Hatchet in the center distance, covered in snow, and Little Hatchet on the left.

Here’s a male Phainopepla we found.  This is a bird I worry about as we’ve seen declines in the last 36 years I fear.  It’s also in one of the groups that is most at risk–it’s an avian aerial insectivore, sallying from it’s perch to catch flying insects. This puts it in the crosshairs of all of the changes going on. It also eats mistletoe berries and that makes it’s abundance irregular, varying with the fortunes of the local mistletoe plants.

We always try to make it all the way to the “Section Pasture Pond,” which is actually a dam on a small normally dry tributary to Miner Creek that was on the land long before Delia’s folks showed up.  A Black Phoebe and a Song Sparrow (not that common around here) were at the pond, no ducks which we always hope for.  (The other three tanks on the territory were iced over, but we did get 3 Wilson’s Snipe and 2 Killdeer.)

Since I mentioned Miner Creek, here it is.  I always like to tell people that Miner Creek is not named for a specific economic activity, but Elizabeth Miner, a school teacher who taught in Animas long ago, I believe. Notice in the last two shots how fast the snow can melt around here, especially off the south facing slopes, and even when the sun doesn’t come out.

Meanwhile, back at the ranch we keep getting snowstorms.  This is one of a Raven couple.  Ravens, now that we have a pair that hangs out be the house, we have learned they could be called “Lovebirds,” except the name was already taken. Here the mate seems to be off foraging however.

Dark-eyed Juncos didn’t seem at all fazed by the snow. They are seedeaters of the North Woods and have seen it all before. This one was near the house.

We had stayed at the delightful Cave Creek Ranch for the counts so we could get going on time. The Monday after, the last day of the year, we hiked up South Fork Cave Creek. Here it is. The white trunked trees are Sycamores.

This is a case of a good bird getting involved with a bad picture: The gorgeous Olive Warbler, orange, black and white with a face-mask, is one of the fastest moving warblers in the US, as fast as a Wilson’s or Golden-winged but given to staying high in the tops of trees. It’s not too common in the winter and we were delighted to see it in South Fork.

Blue-throated Hummingbirds are winter residents at Cave Creek Ranch.  They are the largest hummers in the US and quite gorgeous.

This was from our first day down here, another terrible shot, but this bird didn’t get any lower than 2000 feet up in the sky.  Look at all that white on the wings and tail. Also notice the pointed wings, as the wind was blowing hard and this young Golden Eagle wasn’t soaring but kiting.

To continue in reverse order, this male Vermillion Flycatcher was at the Tucson Airport when we arrived on Dec. 26.

Too soon it was time to head back to Seattle. On the way home we watched a Prairie Falcon air its grievances toward a Northern Harrier, then circle above us vocalizing loudly. That, four Kestrels on I-10 and snow on the Santa Rita mountains outside Tucson were a great end to a great trip.

We visited Vashon Island today and found maybe four Eared Grebes at Tramp Harbor. It was a full-on sun in the afternoon and the Eared Grebes eyes were on fire! Often in low light conditions in the Northwest winter days, I don’t even notice they have red eyes.

There were Surf Scoters there, how about this male. We had White-winged Scoters also in Quartermaster Bay. We also had a Spotted Sandpiper at Lisabeula Park on the West coast of Vashon and Brian Pendleton, true to form, spotted a Eurasian Wigeon in a distant Wigeon flock at Tramp.

This was a ferry returning from Southworth. Thank you WA Ferry system for your great color schemes and designs, a WA State Ferry is almost always a sight to behold.

This Northern Shrike is still bloody, presumably from it’s last meal. This is a songbird by genealogy but a hawk by occupation, and sometimes it shows. You never see that on a Bushtit. This bird was at Marymoor Park two days ago.

This horrendous shot is of a bird that came for a second bath at Butyl Creek at 1 pm on Jan 16th (2019). Delia found the bird after it bathed the first time at 10 am and we identified it then as a young male Tennessee Warbler but despaired of getting a better view or photograph. This is the only shot we got when the bird came back at 1 pm (We’re thinking of rearranging the creek so when the birds bathe, we can see them better). In spite of how terrible this shot is, I think it indicates a Tennessee Warbler.

Here is the same shot closer but still terribly blurry.

I’m calling these Tennessee Warbler Bad Shot Number one, two and three. This shows how white the bird is up front and below.

This bad shot shows how thin and sharp the bill is, how short the tail. The wings are long and clearly built for long distance flight.

This was taken on the Tennessee Warbler’s 7th visit, during which I finally got some decent photos. (Bird authority Ryan Merrill, who was here also, took over 100 shots of the bird himself).

The bird took a while this time deciding where it would bathe.

Another shot from today the 26th.

Yet another, showing the green pretty well, plus the short tail, eyeline and long white under-tail coverts.

We understood Ryan to say this was probably only the second wintering bird for Washington State. It is uncommon but regular in migration.

As we drove in to the Eide Road parking lot at Stanwood we blundered into a stakeout with a massive line of tripods and huge cameras pointed directly at us. We passed through and parked and asked somebody what was going on. It turned out everyone knew a Barn Owl was in the line of trees across from the parking lot and some claimed she would fly out before it was fully dark. “Sure,” we thought, and concentrated on identifying distant flying Short-eared Owls, Northern Harriers, a Rough-legged Hawk, and a Northern Shrike. But sure enough, A Barn Owl soon sailed out of the trees. Unconcerned at the bank of long lenses and cameras going off like at a fashion shoot, this gorgeous Owl posed on a branch, then on a foot-bridge about 15 feet from us.

Under construction.  Comments on this page are closed for technical reasons but please feel free to email Ed Newbold with any feedback at ednewbold1@yahoo.com