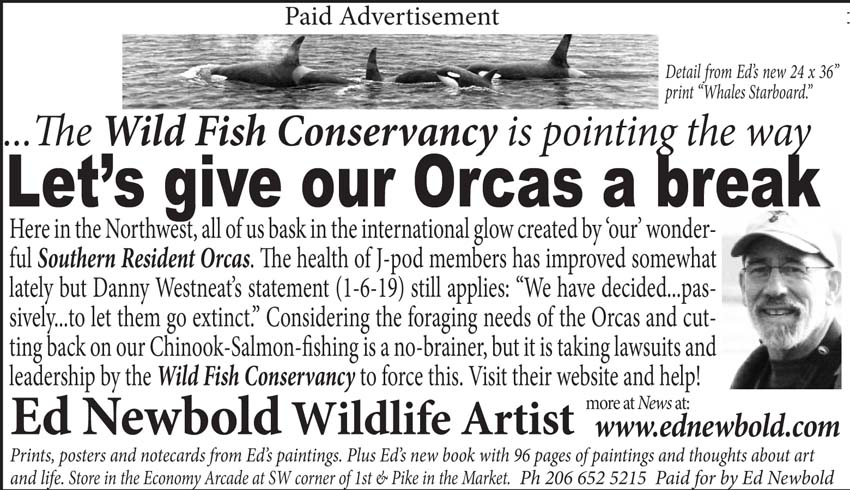 The ad shown above should be appearing in the June 20 A-section of the Seattle Sunday Times. The ad credits the Wild Fish Conservancy for it’s leadership and activism that is going against the tide of inaction, passivity and blame-passing that has been the hallmark of our “efforts’ to save the Orcas so far.

Here is a link to a recent posting by the Wild Fish Conservancy that also is what specifically inspired this ad:

Seattle Times readers may recognize the echoes of a Danny Westneat column from Jan 6 , 2019 in the ad. That column was titled “We Won’t Curb Salmon Appetite to Save Orcas. In it Westneat quotes Kurt Beardslee, the director of the Wild Fish Conservancy. Among them, as saying “To cut back on fishing is an absolute no-brainer, as a way to immediately boost food available for Killer Whales…but harvest reductions are essentially not in the governor’s task force recommendations. We have a patient that is starving to death, and we’re ignoring the one thing that could help feed the patient right now. We’re flat out choosing not to do it.”

Although ocean conditions seem to have improved somewhat along with Southern Resident J-Pod’s apparent health, no major changes in the fishing regime have been made in the interim period, as I understand it. The Wild Fish Conservancy link above raises the little-discussed (by us in the general non-fishing public) issue that Puget Sound fish are harvested in the Alaska Salmon fishery as these well-traveled fish roam the Northeast Pacific in their search for forage. The fish taken, which might otherwise feed the Southern Residents, are listed as “sustainable” and can be bought with the blessing of the The Monterey Aquarium.

My Seattle Times ad also in passing announces the publication of my new print “Whales Starboard” in 24 x 36 super XL size. available now on this website under “Shop” then “Larger Prints.”

Here is the ad again:

And Here is Whales Starboard:

Here in the Northwest, all of us bask in the international glow created by ‘our’ wonderful Southern Resident Orcas. The health of J-pod members has improved somewhat lately but Danny Westneat’s statement (1-6-19) still applies: “We have decided…passively…to let them go extinct.” Considering the foraging needs of the Orcas and cutting back on our Chinook-Salmon-fishing is a no-brainer, but it is taking lawsuits and leadership by the Wild Fish Conservancy to force this. Visit their website and help!