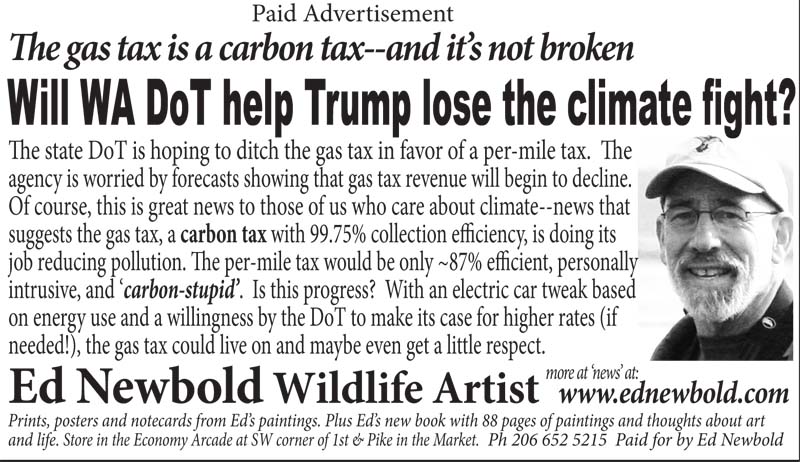 The ad shown above is scheduled to run in the Seattle Times on Tuesday, October 3 2017, A section.

(Ads have much longer timelines than news stories.  There is anguish on my part over the tragic event in Los Vegas not to mention what may be an unfolding tragedy in Puerto Rico.) 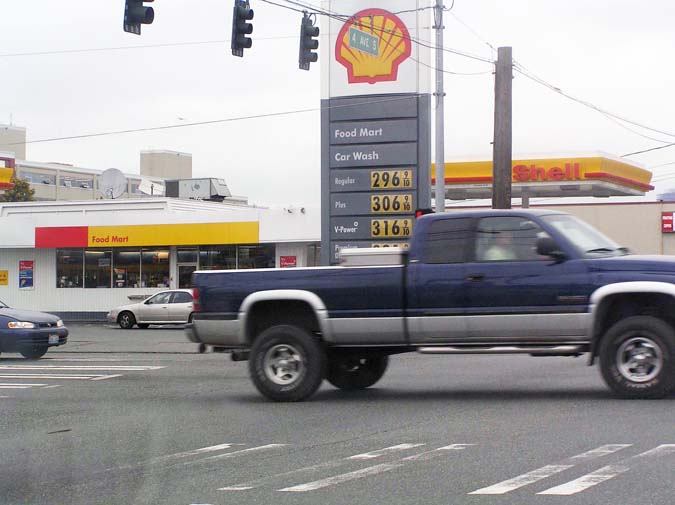 The State Dept of Transportation, like most other state DoTs & the Federal DoT, want to ditch the gas tax and replace it with a per-mile tax.

The agency makes its case here: 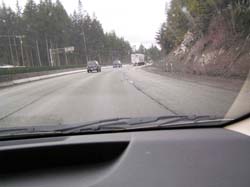 I quote now the core of the DoT’s argument as presented on that webpage:

“The average Washington driver gets 20 MPG, which

means they pay 2.5 cents in state gas taxes for every

mile they drive. By 2040, the average driver will

consume a lot less fuel—anywhere from 40-55%

less—because of improvements in vehicle fuel

ef ficiency. While this is positive for the environment

and for consumers saving money on gas, it also

means drivers will pay less in gas tax for every mile

they drive. Thus, in the future, in order to maintain

current revenue, the gas tax would have to be

increased, which would disproportionately impact

of newer cars, including hybrids and electrics, would

continue to pay little or nothing. This dual problem of

revenue decline and the increasing unfairness of the

gas tax is what has motivated Washington to explore

at (sic) RUC as an alternative.”

An exaggeration of concern

What you see in that paragraph is an attempt to dress up WA Dot’s desire for a new and different tax in the poorly-fitting cloak of populist concern for the driving poor.

But the notion that poor people will be advantaged by the switchover is very suspect.

More money will have to be collected

For starters, the new tax will be more expensive to collect.  Nobody knows how much the bureaucratic machinery for collecting this tax will actually end up costing, but one estimate is 13% of total revenue collected.  All else being equal, in that case, the new tax will have to raise 15% money more than the gas tax does now just to bring in the current or same amount of revenue. This factor alone will probably mean that the driving poor will pay more under the new tax than they do under the current regime of the gas tax.

Logic is roadkill of the DoT’s justification

But it’s much worse that that.  Take a look at the DoT’s core argument, and you see that the problem they are pretending to care about—hardship on the driving poor—is nonexistent given their own predictions and premises.

(I strongly disagree with their predictions, but let’s accept them for the sake of the argument.)

By 2040, they say, the average driver will consume a lot less fuel, 40-55% less than currently.  But this will mean the gas tax will have to be increased, they say, and this will penalize the drivers of older, less fuel efficient cars. But if all this comes to pass, even at higher rates the tax still costs less than the fuel, and the savings the average driver will net on fuel will more than cover the cost of the increased rate of the gas tax.

Clearly, if the motor fleet is using 40-55% less gas, the savings in fuel economy will not be restricted to wealthy doctors and lawyers driving Teslas, as the DoT seems to want you to believe when they say: “Drivers of newer cars, including hybrids and electrics, would continue to pay little or nothing.”  Wow! Take a look at the bias implicit in that sentence, especially given that new sales are dominated by SUVs and even midsize hybrid SUVs hardly pay “little or nothing” in gas taxes. 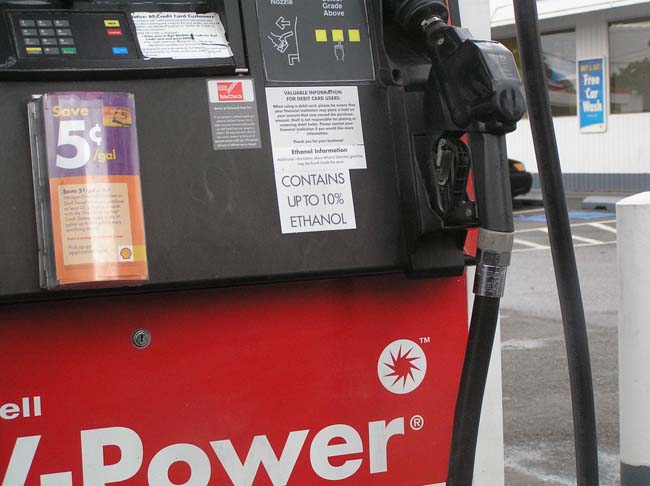 Another point of illogic in all these DoT screeds against the gas tax is equating electric cars with hybrids.  In the case of hybrids, the source of energy is still fossil fuel, they just use it more efficiently. They should not be placed in a separate category from other gasoline powered cars at all.  Electrics, which tend to be much more efficient than anything powered by an internal combustion engine, do use a different source of energy, whatever is available on the local grid, and they do truly escape the gas tax.  To the extent electrics make inroads in the market, which would be a very good thing but is far from assured, there does need to be a road tax imposed on them.  But it should be based on mpg-equivalence.  I suspect most electric car owners would be willing to pay a little more than their share if that is the principle underlying the tax they pay. 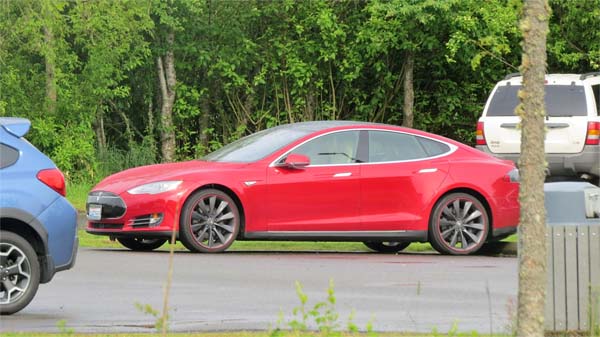 Another point of illogic is to avoid entirely the fact that the gas tax actually does measure something comparable in many cases to road wear.  A thousand Honda Fits driving over a street won’t have the same impact as a thousand Hummers or one-ton trucks.

This is a juggernaut

DoTs across the country, including the Federal agency,  have linked arms and are marching forward with this change from the gas tax to the per mile tax. They will probably succeed in implementing this tax if the only opposition they have is from the traditional anti-tax constituencies.  Environmentalists are key, because so far they have been taken in by agency rhetoric to some degree.  It’s a measure of how  far we still need to go in the world that a major article on this tax shift in the Seattle Times last month failed to even mention the relative impact the two different ways of funding transportation would have on climate pollution.

If the agencies are successful, they will have locally eliminated one of the few speed bumps that currently exists to slow down the heating of the planet, as the gas tax is a carbon tax that puts the breaks on climate pollution. (humans have done nothing significant to slow down climate change. The only action taken in expeditious unison was to quickly implement biofuel mandates in 60 countries, which turned out to be a false solution that actually made the problem worse.  Other actions involve pledging future reductions and mandating various subsidies and expenditures that don’t affect the fundamentals in the fossil fuel market and thus are basically irrelevant.)

WA DoT is way ahead of itself if it’s predicting a massive switchover to electric cars.  They can’t give us a reason why this would occur, and they are trying to take away one of the ‘prods’, the gas tax.  But if such a switchover ever should happen, then a per mile tax or something like it might have to be adopted.

We should be going way slower than we are on it, however, and we should be looking at the effects on transportation sector pollution. A tax that is completely blind to energy use, like the one DoT wants, is actually a subsidy for large and heavy vehicles. The DoT should be in brainstorming mode now, not propaganda mode.