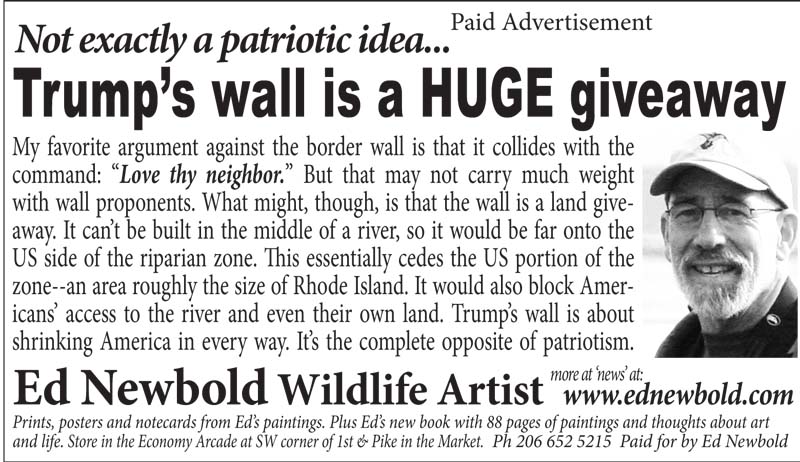 I’m running an ad in the Seattle Times Tuesday, August 15, 2017 that attempts to draw attention to the massive land giveaway that is the border wall.  It also makes a note of the wall’s collision with the hallowed quote, “Love thy neighbor.”  Here is the text of the ad:

Not exactly a patriotic idea..

The border wall is a HUGE giveaway.

My favorite argument against the border wall is that it collides with the command: “Love thy neighbor.” But that may not carry much weight with wall proponents. What might, though, is that the wall is a land giveaway. It can’t be built in the middle of a river, so it would be far onto the US side of the riparian zone. This essentially cedes the US portion of the zone–an area roughly the size of Rhode Island. It would also block Americans’ access to the river and even their own land. Trump’s wall is about shrinking America in every way. It’s the complete opposite of patriotism.

I apologize to readers.  I am having trouble with my website and I wasn’t able to edit my blog post to go with this ad.  I may get something up by this evening, August 15.–Ed Newbold