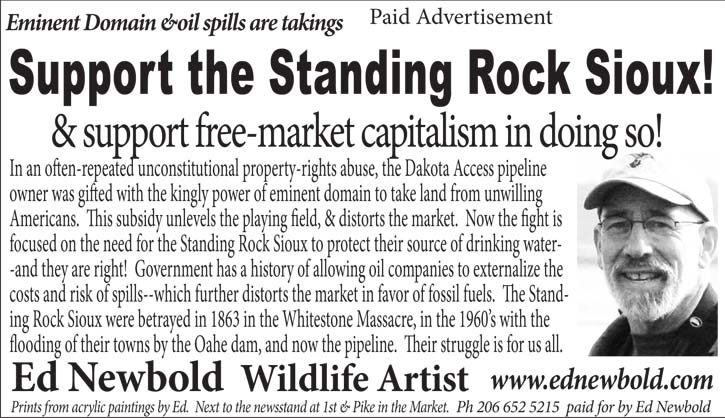 Posted from Seattle on Nov. 29, 2016
The text of the ad reads:
In an often-repeated unconstitutional property-rights abuse, the Dakota Access pipeline owner was gifted with the kingly power of eminent domain to take land from unwilling Americans. This subsidy unlevels the playing field, & distorts the market. Now the fight is focused on the need for the Standing Rock Sioux to protect their source of drinking water–and they are right! Government has a history of allowing oil companies to externalize the costs and risk of spills–which further distorts the market in favor of fossil fuels. The Standing Rock Sioux were betrayed in 1863 in the Whitestone Massacre, in the 1960’s with the flooding of their towns by the Oahe dam, and now the pipeline. Their struggle is for us all.

With this ad, I’m continuing to plug for a more economic approach to climate and the environment.  Government does not need to cap and trade anything, does not need to create wind, solar and electric car subsidies, government just has to remove existing subsidies from entrenched industries and stop allowing entrenched industries to off-load the costs they impose on society to third-party payers.

In this case, the third-party payer is the Standing Rock Sioux, who want to defend their sole source of drinking water.  People will marvel, years from now, that anyone wondered for a minute which was more valuable, oil that burns up immediately and contributes to the dismantling of the natural system and increases vastly our future costs of doing business (when our forests burn, our agricultural system is stressed and our coastal cities are flooded)–or water that sustains all life.
Here is a link:
http://standwithstandingrock.net/