Ad is a plea for debate
11330
post-template-default,single,single-post,postid-11330,single-format-standard,theme-bridge,bridge-core-3.0.1,woocommerce-no-js,qode-page-transition-enabled,ajax_updown_fade,page_not_loaded,boxed,,side_area_uncovered_from_content,overlapping_content,columns-4,qode-child-theme-ver-1.0.0,qode-theme-ver-29.3,qode-theme-bridge,wpb-js-composer js-comp-ver-6.9.0,vc_responsive,elementor-default,elementor-kit-12768

Ad is a plea for debate 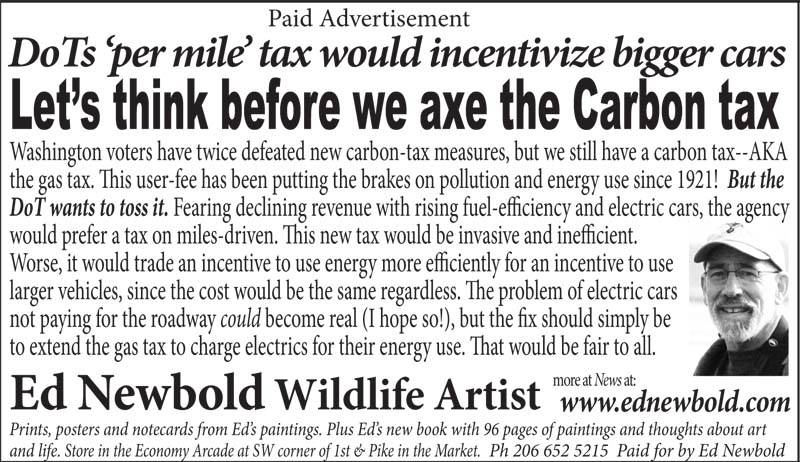 08 Dec Ad is a plea for debate

The above ad which takes a stand against the proposed new mileage tax and in favor of keeping the gas tax should run in the Seattle Times Sunday edition A-section on December 9, 2018.

I believe voters in Washington should be alarmed or at least deeply concerned by the plans the Washington state Department of Transportation is hatching to replace the gas tax with a mileage tax.

The worst is yet to come…

My ad necessarily simplifies an issue with immense complexity.  My own biggest fear—that we will ultimately get a mileage tax in the urban core of Western Washington but  not in the outback—is not even referenced in the ad. Most people would expect the political resistance to be based in “red-state” politics and expect the opposition to a mileage tax to boil over especially in places like Ferry County, so it seems predictable that the DoT would eventually give up on forcing these areas to accept per-mile.

If we end up with a mileage fee in urban areas only, it will in my opinion put a serious upward vector on pollution by pushing thousands of businesses and people away from the urban core, essentially incentivizing urban sprawl cuased by understandable tax-avoidance behavior that would further increase transportation-sector climate pollution.

My ad is hoping to help open another front in the war.  It’s trying to be a shout out to green voters to not be “led” by partisan “I-must-like-this-if-the-other-side-doesn’t” politics or green organizations that may be too closely in step with the  agencies.

And that would be ironic. The whole reason for WADoT’s fear is that our auto fleet is becoming increasingly fuel-efficient. But then WADoT proposes a new road-funding scheme that would remove a huge part of the incentive that has been behind that very trend toward fuel-efficiency: our 49 cent tax on using a gallon of gasoline. Removing this tax would make gasoline historically cheap, and when a product is priced low, it’s use will increase, please reference the law of downward sloping demand taught in every microeconomics class.

What scares me really more than anything else is that the whole debate will proceed, as it apparently has so far, without even a mention of the very serious question: which tax scheme will be best for reducing climate pollution?

Politically, everyone agrees that the mileage tax will not be an easy lift for the DoT.  The Ace-in-the-hole argument that will be used is this: With increasing efficiency, the gas tax rate will have to be raised to keep enough revenue coming in.  This will hurt poor people, the DoT will argue, and this argument may carry the day.

But it’s kind of full of holes.  First because the DoT doesn’t really care about poor people. (I’m not trying to be mean-spirited, that’s just not what really motivates their decisionmaking, nor should it be). What they desperately want is a funding mechanism that they can trust, and that gives them maximum control.  The poor people argument is just their most effective one.  The flaw in it is that the new tax, because of the inefficiency in collecting it, will have to raise something like 13% more than the gas tax just to deliver the same amount of revenue to the department. This has to wash out any advantage that the per mile would have for a poor person in a long commute driving an old F-150.

And not only is this argument full of holes, it misses the reality that this scenario being described is the aacatually the market based solution to our world problem of climate pollution.  Every market change brings some pain.  It was painful when 90% of American families were forced out of farming (as I mention in my sightings blog, my grandfather was an apple farmer. Age made the force-out fairly graceful in his case). But the answer wasn’t for government to rejigger the economy to try to keep everyone still farming: Let changing prices bring about changed behavior. It always has, it always will.

Sorry I’ve been unable to open the comment section. Readers of this blog are more than welcome to email me at ednewbold1@yahoo.com