With So-called “Green Deals,” Environmentalists are headed in the wrong direction; especially in Europe
12967
post-template-default,single,single-post,postid-12967,single-format-standard,theme-bridge,bridge-core-3.0.1,woocommerce-no-js,qode-page-transition-enabled,ajax_updown_fade,page_not_loaded,boxed,,side_area_uncovered_from_content,overlapping_content,columns-4,qode-child-theme-ver-1.0.0,qode-theme-ver-29.3,qode-theme-bridge,wpb-js-composer js-comp-ver-6.9.0,vc_responsive,elementor-default,elementor-kit-12768

With So-called “Green Deals,” Environmentalists are headed in the wrong direction; especially in Europe 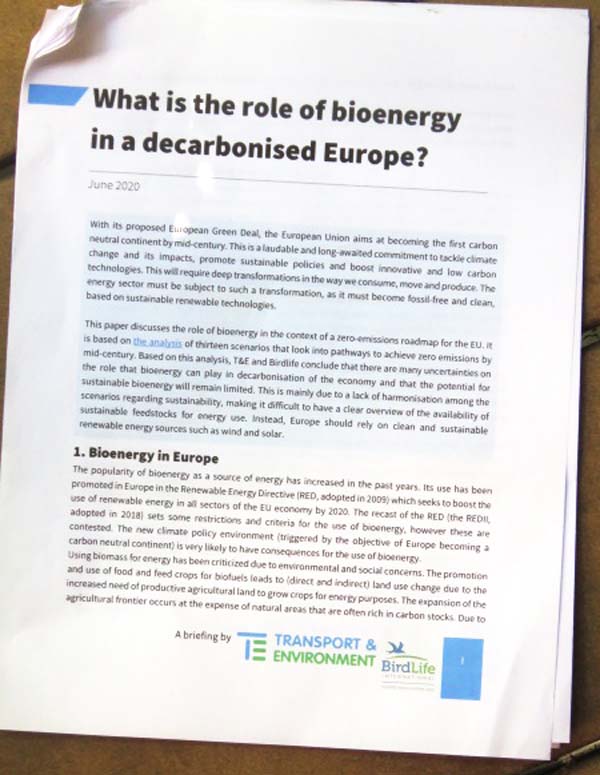 25 Jun With So-called “Green Deals,” Environmentalists are headed in the wrong direction; especially in Europe

By making a devilish alliance with an industry, environmental leaders are stealing any hope the Earth has left to halt climate change. Somewhere, somehow, agricultural biofuels and biomass (burning wood) got an early and permanent blessing from environmental organizations and environmental beat-reporters all over the world. The result is political action plans being proposed almost everywhere that will not only not win the fight against climate change, they will make it much worse and speed up the destruction of biodiversity in the process.

In a new report, BirdLife International (BLI) has blown the whistle on one of the worst offenders: Europe and its so-called “Green Deal.” The Green Deal has been hyped as the plan that will lead Europe to carbon-neutrality. . “What is the role of Bioenergy in a decarbonised Europe (June 2020)? The report calls on Europe to make massive changes in its “European Green Deal” going forward.  The first policy recommendation of the report is to “End the zero-carbon rating of Biomass in the E U Emissions Trading Scheme.” Pretending that burning forests to create heat and energy is carbon-neutral, a belief not based in reality let alone science, is the original-lie behind the rampant destruction of forests in Europe and the US to make electricity.

(In the US, we do not yet have a Green New Deal–thankfully–but it is on the drawing board and supporters have significantly not promised to keep the biomass and biofuel industry from being feeding at the trough as the legislation is written. The environmental movement has always liked the analogy of the fox guarding the hen-house, but this would be a case of the Fox helping design the hen-house.)

The second recommendation in the BLI report is that the European Union (EU) phase out the policy support to food and feed-based biofuels as soon as possible and avoid (allowing) aviation and shipping  to become new drivers for these unsustainable fuels.

Notice that corrupt or deluded Green Leadership in Europe is on the same page as the climate-green leadership in our state of Washington where Alaska Airlines is being lauded rather than attacked for it’s announced program to add biodiesel to its future fuel mix.

The BLI report, by Cristina Mestre of Transport and Environment and Luke Edwards of Bird Life Europe has the restrained tone of a typical scientific paper but it’s conclusions speak volumes. It goes on to add policy recommendations aimed at ending subsidies and incentives and to restrict the use of Biomass (wood-burning) and Biofuels. Since much of Europe’s so-called “Green” Deal is based on increased use of biomass and biofuel, these conclusions are damning.

Biofuels are now known to be generally worse even than regular gasoline or diesel for the climate and the environment as they require large amounts of land for crop cultivation and therefore push the overall footprint of griculture into the prairies and rainforests, increasing carbon pollution and reducing biodiversity.

The report calls on Europe also to remove all incentives for Biomass. Biomass is the greenwashing term for burning wood from forests. Rare oldgrowth forests have already fallen to the ax of biomass, especially in places like Poland which prior to the current regimes had some of the last extensive forests in Europe, as well as the American South, where forests are razed to meet Great Britain and Europe’s insatiable appetite for wood pellets, all driven by climate-do-gooder-legislation.

Anyone interested in Biomass is invited to go to this link, in which Mary Booth, writes sentences like this one: “The problem with this so-called green energy source is that instead of decreasing greenhouse gas emissions, it increases the amount of CO2 coming out of the smokestack compared to fossil fuels, and the climate “benefit” is claimed by simply not counting the emissions.” Here is the link to The Great Biomass Boondoggle,” originally published as a letter in the New York Review of Books: