Berta Caceres: a Hero for humanity

My ad shown above should appear in the Tuesday March 15 A-section of the Seattle Times. It is meant to help draw more attention to the murder of Berta Caceres on the night of March 3, 2016, who was an outspoken and charismatic leader of her Lenca indigenous people of the Rio Blanco region of  Honduras. 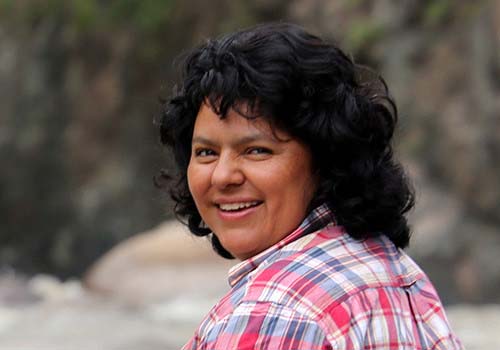 Berta Caceres stands at the Gualcarque River in the Rio Blanco region of western Honduras where she, COPINH (the Council of Popular and Indigenous Organizations of Honduras) and the people of Rio Blanco have maintained a two year struggle to halt construction on the Agua Zarca Hydroelectric project, that poses grave threats to local environment, river and indigenous Lenca people from the region.      Text and Photo courtesy of Goldman Environmental Prize

The murder is part of a campaign of violent intimidation of opponents of the Agua Zarca dam being proposed that will flood sacred lands of the Lenca.  A Chinese and an international bank had already withdrawn support of the project, after a dam-protest leader was killed several years ago, leaving the largest investor a bank called FMO which is partially owned by the Dutch government.
I am asking everyone to go to this page and sign a petition asking FMO to withdraw funding for the dam.   Here is the link:
http://action.sumofus.org/a/berta-fmo-bank-divest/?sub=homepage


(If you have trouble with this link, Google Sum of us and hit on Campaigns.  It is currently the fourth campaign from the top of the page)

For more on the story, here is a Huffington post article about Berta Caceres:

Berta Caceres had received the Goldman Environmental Prize in 2015. Here is a link to the Berta Caceres pages on their Website: