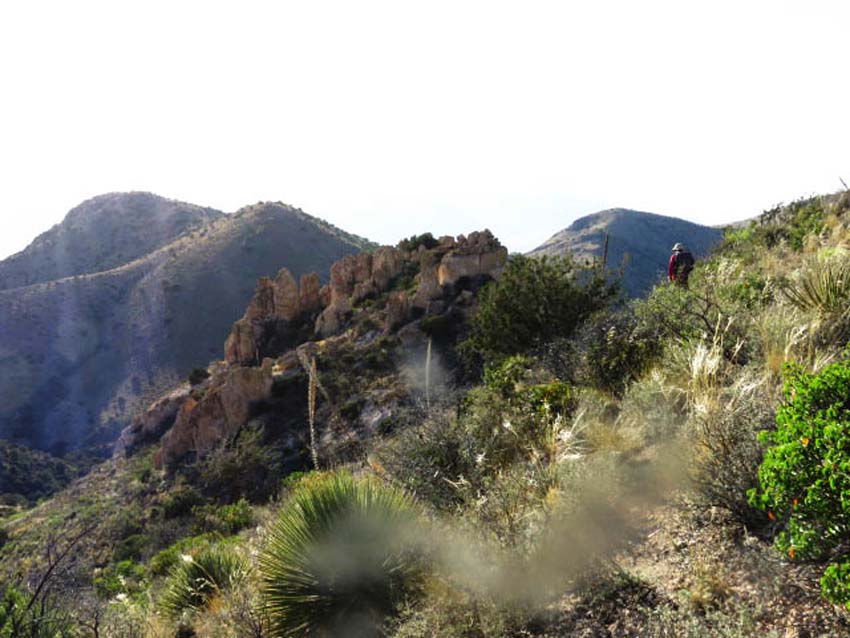 20 May Bushwhacking the Backcountry

Posted at 00:18h in sightings by EdNewbold 0 Comments
0 Likes

Posted from the Central Peloncillo Mtns, New Mexico, May 19, 2020

Delia and I arrived late in Tucson, too late to bird the Airport Wash. But we noticed a sign of the times as we headed out: seven Javelinas headed out for a night on the town.

The next day we found 5-8 Black-crowned Night Heron at Cochise Lake in Willcox.

There were two Neotropic Cormorants at Cochise Lake, note the long tail and v-shaped white area. This species is practically dainty compared to our Double-crested Cormorants in Seattle.  There were also White-faced Ibis, Avocets, Stilts and Red-necked and Wilson’s Phalaropes at Cochise plus two Burrowing Owls.

At the Bioresearch Ranch in Post Office Canyon in the Peloncillos we found to our great relief that the pump was not on the fritz and hadn’t done a number on the water heaters.  Everything was ok. So we immediately put out some hummer feeders whose best customer has been the Hooded Orioles, the male shown here. We also have had Lucifer, Broad-billed, Broad-tailed and Black-chinned Hummingbirds.

A Moth researcher from Silver, New Mexico named John Gorey has been researching Moth populations at the ranch. We met him for the first time this visit. He is studying Moths in an area of the Ranch that is more on the eastern slope of the Peloncillos, which are a narrow north-south ridge that divides the San Simon and the Animas Valleys. John Gorey, at the upper right in this shot, showed us a way to get to the canyon he is studying much more quickly than we would normally go, but it was mostly bushwhacking and involved some steep  exposed crossings that I am going to have to buy new shoes for if I ever do again.  (My shoes are balder than I am.)

I fell in the scree a few times and forgot to clean off the camera lense, so most of these shots are, let’s call them “art shots.’  This is looking south down the spine of the Peloncillosw.

The house is around the white cliffs and down. I was beside myself with delight when John pointed out nesting White-throated Swifts above us high on cliffs near this spot.  I had complained many times to Delia, (she will attest to this) that the Swifts were no longer around, I hadn’t even realized they nested on the Ranch.

John and his wife (who couldn’t come because of a neighbor’s misfortune)  live partly off the grid in Silver. He told me he purchased a damaged solar panel and a battery from a wrecked Tesla and they have plenty of electricity.  He was a seriously fast runner who ran track and Cross-country in college but is struggling with the kind of conditions that afflict serious runners and may have to give up running. Amazing birding skills (he pointed out and identified many we would have missed) and and a deep knowledge of Nature that comes from really enjoying being out in it.  It was really great to meet John and learn from him, did I mention he’s really easygoing and pleasant to be around?

On the 20th Delia and I went over to Portal, Cave Creek and Rustler Park in the Chiricahua Mountains.  This was a Painted Redstart at South Fork Cave Creek.

And here is a Red-faced Warbler at Rustler Park in the high Chiricahuas.

This continues the red theme and segues right into the “bad-photo-theme”.  This Summer Tanager was in downtown Portal.  What a great bird.  I’m going to paint medleys of birds of different areas and states and this bird will go in my South Carolina medley but it would be at home in an Arizona one also.

On the way home we had Lesser Nighthawks foraging in the San Simon Valley.  Nighthawks are my favorite birds along with the other Avian Aerial Insectivores, and all of them put on a show. I had the settings on my camera wrong so this is in a way a terrible out-of-focus shot and yet it proves the bird is a Lesser Nighthawk (position of white mark) and suggests the speed these birds live life at.

At nearly the same spot we had a Burrowing Owl which we hadn’t seen in this part of the valley for several years so we were delighted by that also.

The next day we were getting set up for cocktails on the deck (OK, OK, one beer each) and this handsome snake came to join us. She/he was very long and thin, maybe about 4 ft. It’s the first Green Rat Snake we have seen there, but Post Office Canyon is one of the first places they have ever been recorded in New Mexico according to the book, Reptiles and Amphibians of New Mexico. They are known from many of the borderland mountain ranges, however, and their range extends as far south as Costa Rica. It seems they are something of a mammal specialist, so the Yellow-nosed Cotton-rats and Chipmunks might want to keep a look out. It is possible we have either Pack-rats or Norway Rats in the vicinity of the house, we aren’t sure and we terribly miss CD Littlefield, who would have given us the low down on that.

This is off-topic for the blog but we got back from New Mexico and soon, in July, went down to Orting where we saw and I took this American Redstart photo. This is my favorite photo of any I’ve ever taken, and my love for it is not diminished by the fact that it wouldn’t get a second look from any body who takes bird photography seriously. It’s way out-of-focus., and you can’t even see the eye. But for me it shows that the bird is drop-dead gorgeous. And even the reason it’s out of focus will be known by those who know and love this bird: It moves too fast! When you see birds like this, you can understand why birds have been called ‘good,” and are under a strict command to multiply.