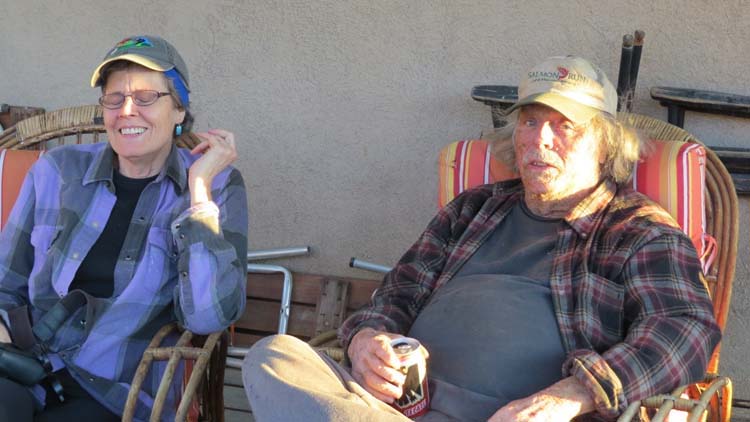 Wildlife Biologist, Sandhill Crane defender and author Carroll Dwayne Littlefield passed away unexpectedly on May 28 of a heart attack at his home in the Peloncillo Mountains of New Mexico.  While C.D. had receded from public life over the past 17 years, his memory looms large over his former haunts, especially the Malheur National Wildlife Refuge in Oregon where he worked tirelessly and sometimes controversially to save breeding Sandhill Cranes. His book Birds of Malheur National Wildlife Refuge is a long-time favorite with birders there.  His loss is also felt deeply in the New Mexico bootheel, where he has done research and made a home since 2003 and is very beloved.

CD was born June 21, 1940 in Plainview, Texas after which his family moved to Happy, Texas. At 11 months CD the toddler was playing with a loose gas-hose to a heater that exploded in his face, an injury whose marks remained the rest of his life and may have been a factor when an Oregonian newspaper-reporter-woman described him many years later as “ruggedly handsome.”

He went to Lazbuddy High School where his obligatory Texas football career ended early “I got beat to a pulp,” he says.  Sandhill Cranes were a fixture in his youth also: “They came right into the yard.  There was no hunting season for them then and they were pretty gentle.”

After high school CD found his way to Eastern New Mexico University and then Texas Tech where he got his undergraduate degree.  He matriculated at Colorado State in a forestry master’s program but within 6 months switched to Wildlife Biology and Management, reflecting his ever-growing life-long passion for birds, wildlife and nature.

After receiving his Master’s Degree CD embarked on a wildlife biology career that took him to a list of places that reads like a rollcall of the wild areas left on the continent.  Summer and temporary jobs took him to Pingerry Park Ranger station, Hutton Lake NWR outside Laramie, WY, to the North Platte River near Casper.

Next was Churchill, Manitoba working on geese and later to Dolphin, Manitoba.  Later stints would take him to the Aleutian Islands in Alaska and the Cosumnes River in California. CD had plenty of stories from the field. I once asked him if he’d had any experience with Jaegers, which are in truth the bird the Seattle Seahawks are named for (not Ospreys).  His helicopter pilot in Churchill, it turned out, had been terrified of them. “The minute a Parasitic Jaeger saw the helicopter, it would lift off its nest heading straight for us, preparing for mortal combat!”

CD’s academic life continued after Colorado, and as soon as he was accepted into the University of Arizona’s Doctoral program in Wildlife Ecology, CD made a beeline for Malheur National Wildlife Refuge in central Oregon and began his epic studies of Sandhill Cranes. CD bounced between the U of A and Malheur for much of the 70’s, and these times may have witnessed an emerging tug of war in CD’s head between the office-centric demands of academia and his strong longing to simply be out in the field observing and studying wildlife.

Speaking of the that, it was at Arizona that CD became fast friends with a group of young birders now sometimes regarded as the best of their time—including the late Ted Parker and Ken Kauffman, both names renowned in birding circles. The only problem with these kids, CD often complained in his good-humored way, was that they were all so young he was the only one with a driver’s license.  There were long trips in a Ford Pinto packed to the gills, looking for great birds in Mexcio as far south as Chiapas.  Those were the days. However, CD’s obituary almost had to have been written back then, as he described driving all night in a sleep-deprived coma trying to get back to class at U of A by Monday morning.

Meanwhile, CD’s dissertation work quickly morphed into a position with the Malheur Field Station, then headed by Denzel Ferguson. He also contracted as a wildlife biologist with the Refuge, during that time led by Joseph Mazzoni.

During his Malheur years (1979-2002 plus or minus)  CD pushed to save the breeding population of Sandhill Cranes there, who were falling prey to various species of nest-predators and generally argued for the refuge to live up to its name.  He also wrote scientific papers on Sandhill Cranes and other subjects, I do not have the list at this point (EN) and was typically at one time the DJ at the Greasewood Room on Saturday nights at the Malheur Field Station.

CD was revered by many, yet was also vilified by people on both sides of the spectrum for the policies he recommended to save the Sandhill Cranes and other wildlife.  During the time Delia and I knew CD (2003 -2019) I always assumed he had a light case of PTSD (not to minimize that word’s definition) and never forced him to talk about the nuts and bolts of the various disputes, which led to a 60 Minutes episode at at least one point that I remember seeing long before I ever knew CD.

During the Malheur years he also became official guardian of two kids whose family life had deteriorated.  Rob has preceded him in death but Gailyn stays in contact with CD and helps with finances and CD continued to love and care about them to the end.

The Malheur controversies may have caused CD to become somewhat world-weary and he retired from paid work at the first opportunity in 2002 to return to Muleshoe, TX, where he continues to have two wonderful older sisters, Shirley and Betty.

Soon after that move his longtime wildlife biologist friend Rod Druyen alerted him of an opportunity to live on the Bioresearch Ranch in the Peloncillo Mountains, established in 1971 by Bob and Katie Scholes.

CD jumped at this opportunity, and immediately set an ambitious goal of doing 15 10-and-12 year transect-studies that involved walking 15,000 miles on the Ranch during that time frame.  He had over 20 encounters with Black Bear, “all friendly,” he says, uncounted encounters with Rattlesnakes (always friendly in the bootheel!) and had guns drawn on him twice in the outback. The studies were transcribed onto a computer by Will Moir, retired range biologist for the BLM.

Around 2016, CD finalized all his transect studies.  He stopped walking long distances but remained a voracious reader and book-buyer, almost to the point of crowding out his personal space in his house.  He loved to feed the Hummingbirds on the Ranch as well as the Deer and White-winged and Mourning Doves, as well as other species.  In the week before he died he saw a Yellow Warbler, a common bird generally but rare at the ranch, which is at 5600 ft. elevation, and a Varied Bunting, also rare at the Ranch.

Although CD was essentially living the life of a hermit at this point–perhaps oddly–he always truly loved people and valued every interaction he had with those he encountered on the ranch or on his occasional resupply trips to the nearby towns of Rodeo or Animas. He enjoyed every chance to talk with all neighbors including our late rancher-neighbor Bill Miller Junior who at least once helped pull CD’s beat-up red Chevy pickup out of a ditch.

Delia and I visited CD four times a year and talked with him every third day.  It is impossible to describe how much of a joy it was to be around this man. He had the greatest sense of humor. He was a great chef, having invented the Trapped Butter Sandwich (fold a piece of wonderbread over half a stick of butter.)  He loved all of nature, and anytime we saw something that we couldn’t identify (we only know birds, basically) he would tell us was what it was and then bring us two or three books open to the page.  His breadth of knowledge was fantastic.  He was soft-hearted, particularly of young critters, and loved even the Pogo Ants which built a major anthill on the walkway into the ranchhouse.  Sure, the Pogos had bitten him once or twice (probably many more times) but he defended them from all attackers, just like the Jaegers that used to go after his Helicopter.

CD Littlefield.  God commanded the Critters to multiply.  CD made sure it happened.

Comments unfortunately are closed.  Feel free to email us, Ed Newbold and Delia Scholes, at ednewbold1@yahoo.com

PS. These notes arrived in my inbox after this blog was published. They speak for themselves:
Mr. Newbold, I found your article on C.D. Littlefield today and just wanted to thank you.  I tried to call him today and catch up, but I’m too late.  I spent a summer with him in Malheur when I was a kid — best summer of my life. Good man, very kind, very thoughtful.  Taught me to respect the natural world. I’m grateful that he and I got to work together.  Thanks for your thorough and generous article.  Sincerely, David Franke, Tully, NY 1159

Hi, Ed, my name’s Peter Cantle, and I read with a real sense of loss that CD Littlefield passed a couple of years ago.
I first met CD in 1972 and 1973, when I was a freshman/sophomore Wildlife Science student at Oregon State in Corvallis. The local Audubon group arranged a couple of birding and naturalizing trips over to Malheur NWR from Corvallis during spring break, and CD essentially became our de facto guide while we were there. He was a hoot, not to mention a wealth of information and chock full of field smarts. He showed me my first Bald Eagle (a species that then was still very rare in the lower 48) and talked all our ears off about Sandhill Cranes, including how dangerous they could be! With the passage of time, I can’t say that I recall all the details of those trips, but I do recall CD as an influential, committed, generous, funny and big-hearted man in a fairly stubby package.
I didn’t keep up with CD as I went about my own academic and professional career. Fact is, he probably wouldn’t have remembered me from Adam. But I have never forgotten him and have always thought kindly of him. I happened to see several Bald Eagles yesterday when out for a walk and I thought — again — of CD Littlefield, which caused me to Google, which brought me to your post about his death. Thanks so much for the respectful and informative obituary, which filled in many blanks about a person I have long admired.