Ad for Sunday May 5 Seattle Times: E-cars can deliver us from ethanol!
11923
post-template-default,single,single-post,postid-11923,single-format-standard,theme-bridge,bridge-core-3.0.1,woocommerce-no-js,qode-page-transition-enabled,ajax_updown_fade,page_not_loaded,boxed,,side_area_uncovered_from_content,overlapping_content,columns-4,qode-child-theme-ver-1.0.0,qode-theme-ver-29.3,qode-theme-bridge,wpb-js-composer js-comp-ver-6.9.0,vc_responsive,elementor-default,elementor-kit-12768

Ad for Sunday May 5 Seattle Times: E-cars can deliver us from ethanol! 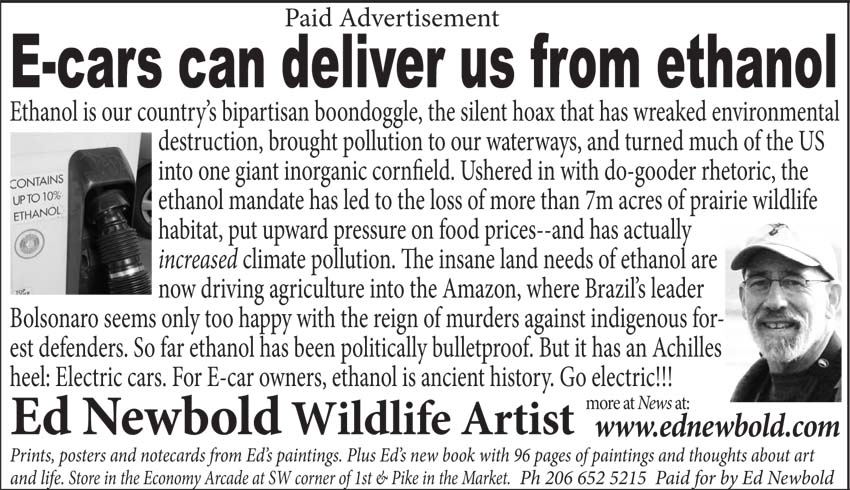 28 Apr Ad for Sunday May 5 Seattle Times: E-cars can deliver us from ethanol!

I’m running an ad in the Seattle Times in the A-section on Sunday May 5. The ad will make a case for buying electric cars for a reason that is rarely if ever advanced in the public sphere: to end the evil reign of the RFS–Renewable Fuel Standard–ie. ethanol.

Here is a movie about the ad, watch for the riveting car-chase:

E-cars can deliver us from ethanol

Ethanol is our country’s bipartisan boondoggle, the silent hoax that has wreaked environmental destruction, brought pollution to our waterways, and turned much of the US into one giant inorganic cornfield. Ushered in with do-gooder rhetoric, the ethanol mandate has led to the loss of prairie wildlife habitat–7 Mn acres– while putting upward pressure on food prices & actually increasing climate pollution. The insane land needs of ethanol are now driving agriculture into the Amazon basin, where Brazil’s leader Bolsonaro seems only too happy with the reign of murders against indigenous forest defenders. So far ethanol has been politically bulletproof, but it has an Achilles heel: Electric cars. For E-car owners, ethanol is ancient history. Go electric!!!

While Americans have lined up on both sides of the climate issue and debated it fiercely and with partisan fury, a completely different but also insidious threat to our environment has been operating under the radar and with a strange kind of silent bipartisan approval: The ethanol mandate. There’s no debate about whether it exists or is anthropogenic.

Now whatever you think of government or Ronald Reagan, his quote lands a direct hit on the ethanol program.

Ethanol’s most basic stats speak for themselves:  we use 40% of our corn crop to replace about 5% of our gasoline needs.  This stat tells you right away that ethanol is not scalable. We do not have enough land at this rate to replace, say 20% of our gasoline needs and still have room to grow food and have houses and buildings. Ethanol is insane. The technology has been around since before the turn of the century–no, not Y2K–1900, yet has never been an even remote success in the marketplace.

Corn is by far our biggest crop by land footprint, over 90 million acres.  So we are using almost 40 million acres of America to replace that precious amount of pumped gasoline.

Ethanol escapes any market discipline through the use of the mandate: anyone who drives an internal combustion car is basically forced to use it. And yet using ethanol makes a person complicit in the destruction of Nature in America.

A sidebar vice of ethanol is that it’s manufacture involves massive amounts of water. In overusing water inputs, ethanol escapes market rigour yet again, as water is a notoriously irrationally priced commodity, especially when supplied in large quantities.

Ethanol also contributes to the pollution of our wetlands and bodies of water and is a large factor in the development of the dead zones in the Gulf and algal blooms in the Great Lakes. In this ethanol completely escapes market rigour as these “externalized” costs have never been measured and priced.

But the most devastating aspect of ethanol has been its takeover of US land and destruction of wildlife habitat, including especially prairie wildlife habitat in the potholes region centered around eastern North Dakota that used to be called “America’s Duck Factory.” I have been in a funk lately because I have read every word of a report put out by the National Wildlife Federation on ethanol. Here below is the link to this illuminating report:

The destruction caused by ethanol is not limited to this country or this continent. Ethanol diverts much of the productive land of the United States from food, but this food has to be grown somewhere. That somewhere is on land in what was formerly the Amazon Rainforest of Brazil and surrounding countries.

This land does not belong to Americans to be used to fill up our tanks. It’s owned by various indigenous tribespeople. When they take exception to losing their homelands, they organize and protest, but are gunned down and intimidated. With the new president of Brazil, this reign of terror has a defacto stamp of approval from government. But some of the moral responsibility can be traced back to the American government and consumer and our complicity in the ethanol mandate.

Here is a link to a campaign that opposes the terrorism against land defenders in Brazil:

As I write in my advertisement, the ethanol mandate has been politically bulletproof. But it has an Achilles Heel. Anyone who buys an electric car can escape the onerous requirement to pay for the destruction of the Amazon rain forest.

My only misgiving about running this ad is yes, I understand not everyone can afford a shiny new electric car. Look at the car I drive, you can see I am not in a position to feel superior to you.

(photo of my 1992 Geo Metro, which sadly makes me an ethanol-abuser.)

On the other hand, I see a ton of these around. Interesting that the world’s fastest production car ever built also gets 104 mpg equivalent and doesn,t cause noise pollution or particularly need repairing. And there are plenty of new electrics available and coming on line that cost much less.

And best of all, they don’t take ethanol.

comments are closed. Feedback is welcome to ednewbold1@yahoo.com