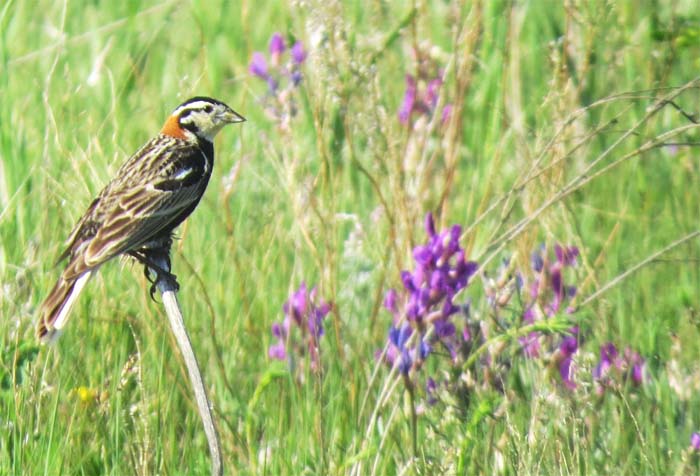 Posted at 17:44h in sightings by EdNewbold 0 Comments
0 Likes

See and help save the American Prairie!

“I love Paris in the springtime,” goes the old jazz standard, but there’s another place that gets magical around that time and that’s North Dakota!  My friend Brian Pendleton, who I teamed up with last year for “The Great Midwest Warbler Safari,” (from Chicago to Indiana, Michigan, Ohio and back  to Chicago, see this page of blogs) are just back from another lightning quick spring trip and this time the ultimate destination was the magical Potholes and Prairie Bird Festival in Carrington, North Dakota in SE Central ND, an event begun 13 years ago to help to promote and protect the birds of the short-grass prairie.

One of the most totemic birds of the North Dakota short-grass prairie is the handsome Chestnut-collared Longspur.  Like many prairie birds, the song is beautiful–like a Meadowlark but often with a flight call added at the end like a signature.  With no real privacy on the prairie, birds can usually see when a neighbor-bird is trespassing or getting interested in their mate and aerial dogfights tend to ensue, adding an extra dimension of enjoyment for the viewer.

Here’s a closeup of a tract we were on at the Potholes and Prairie Bird Festival.  The power of the prairie to enchant involves both the wide openness of the big view you get while looking over tens of square miles or the beauty of the flowers and grasses at your feet. 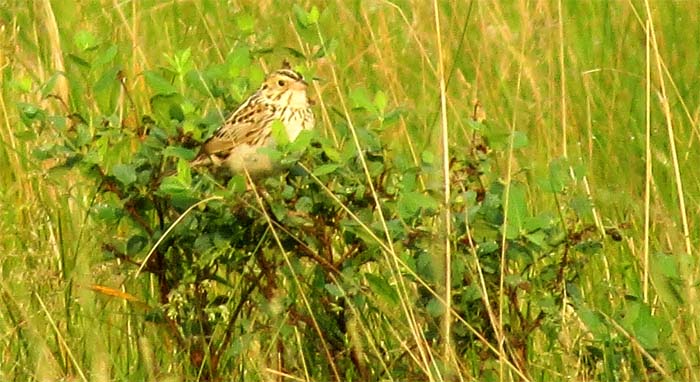 Delia and I slightly know the Baird’s Sparrow from the bootheel of New Mexico, where it is one of the most prized sightings on the Christmas Count, but we didn’t know it had a beautiful trilling song.  A bird that is declining and in some trouble due to the loss of prairie habitat, Baird’s Sparrows were seen and found singing both days of the Festival which is based in the SE Centrally located town of Carrington.  Another bird in the same situation, the Sprague’s Pipit, was caroling overhead like a skylark.

The prairie is full of pothole ponds and lakes, which I was surprised to learn are overflowing as this part of North Dakota has been getting wetter ever since 1994.  Usually an occasional drought year will draw down the water and allow the nutrients to regenerate the ponds and create huge numbers of fish.  But there hasn’t been a dry year since 1994 and indeed, the whole area looked pretty lush.  From a conservation viewpoint, it’s Murphy’s Law in action however and tour leaders remarked that the number of some fish-eating birds like Western Grebes was down. 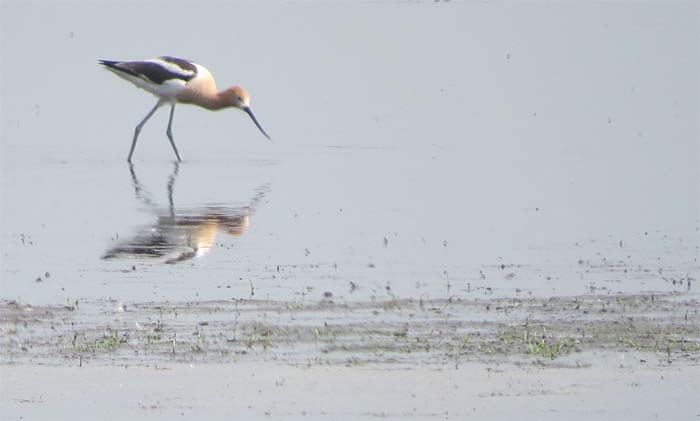 This is a big sandpiper, the Avocet, which is a signature bird of the prairie potholes lakes and always a joy.

When you see a big sandpiper at the beach in Tokeland, WA, San Diego or Florida, you don’t normally think of North Dakota.  But some of the big ones make there home on the praire, including the very large Marbled Godwits.  Godwits have a loud musical voice and aren’t afraid to make use of it, chastising you at the top of their lungs right overhead if you are anywhere near their nest.

One of the tours of the festival goes to Chase Lake, the home of the largest White Pelican colony in the world.  Pelicans are often overhead anywhere you go in the Carrington area and although it’s a bit gawky looking sitting in the water, they are elegant soarers with a ten- foot  wingspan, truly one of America’s charismatic birds.   We were surprised to learn that they eat more salamanders than fish in North Dakota. 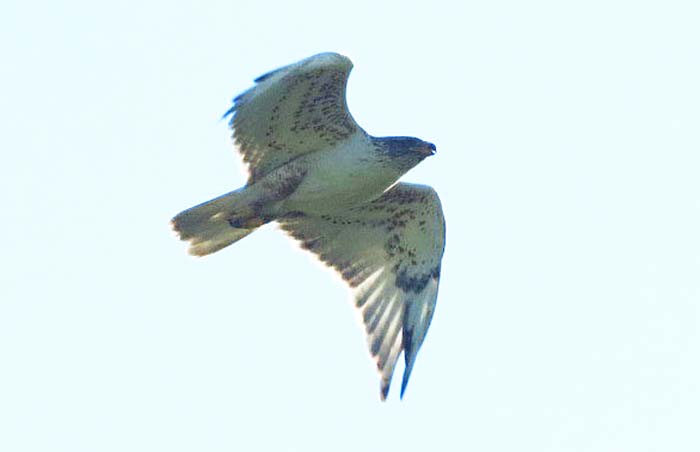 The Ferruginous Hawk is a powerful hawk of the prairie and plains, the largest hawk in North America, a mammal-hunting specialist.  It is one of two largely white hawks of the prairie, the other being the Krider’s Red-tail, a subspecies that may be disappearing through interbreeding with the Eastern-subspecies Red-tails that are moving west with the planting of trees.

Few birds like to mix it up the way Bobolinks do and few lead lives more filled with drama.  They are restricted to the wetter parts of the prairie and can be found both to the east and west of the short-grass prairie region but still face conservation difficulty.  Bird songs on the prairie seem to reach a higher level of musicality than in the woods and the sound of Bobolinks all singing their lungs out is an auditory experience no one should miss.

Much of the remaining native prairie in North Dakota can now be found on small one square mile tracts set aside for the schools.  North Dakotans have wisely decided in many counties to manage these as native prairie with scientifically-managed grazing.  Going to the Festival or nature touring in North Dakota, among other things, is a way to say thank you to North Dakotans for that.  This is a Clay-colored Sparrow, less needy of perfect-quality habitat than some of the others.

Here is one of the others.  Le Conte’s and Nelson’s Sharp-tailed Sparrow like wetter areas and have very specific habitat preferences.  My shot of a Le Conte’s Sparrow has an Aspen leaf obscuring it’s best field mark but is showing it’s defined streaking on the flanks and long bill.  It also was singing it’s insect-like song.  I didn’t get any shots of either Nelson’s we saw but Brian did.  That bird has a song like no other bird I’ve ever heard, one that has been described as water hitting a hot frying pan.  I’ll try to get a link to Brian’s shot of it soon.

Sedge Wrens like the wet areas and also won the cutest bird contest.

Native prairie on private lands is disappearing at breakneck speeds, perhaps in part due to the government ethanol mandate which grabs 40% of our corn crop while not effectively combating global climate-forcing and pushes other crops northward and into Conservation Reserve Program land.   Meanwhile, and to the consternation perhaps of vegetarians which included me perhaps until this trip, cattle grazing can be done on the prairie in such as way as to mimic the effects of buffalo and actually preserves the prairie and allows native prairie to earn its keep in the economy.  However, in order to tip the scales as a consumer in favor of prairie you can’t just buy regular beef, you sort of have to buy only  grass-fed beef.  NOTE that in the photo there is a Cattle Egret with the cows.

Wait a minute!  Did I mention Minnesota?

Before heading west to the Festival, Brian and I did a loop to the lake country of Western Minnesota.   One place we birded a morning and an evening was Tamarack National Wildlife Refuge, which was 44,000 acres of beautiful woods laced with lakes.  Typical of MN, they are too far away in the photo to see, but there are a pair of Loons in the lake above.  Lucky Minnesota.

Migration was over and we were limited in Warblers this time to summer resident breeders.  Here is a Chestnut-sided Warbler which was common in places at Tamarack.

Another warbler, the Amercan Redstart, was abundant at Tamarack although this shot is from the Safari last year because I was having trouble finding the bird with my Cannon Powershot.  A kind festival-goer named Cammy  (sp.) later gave me a crash 5- minute course in it’s operation which made a huge difference.  Yellow Warblers and Ovenbirds were ubiquitous and we had Black and White Warblers also, and to our delight and surprice Tamarack has pretty many Golden-winged Warblers.  Wisely, the management at Tamarack is creating successional habitat that benefits at least several declining species,  including Golden-winged Warbler.

Brian can tell the difference between the song of this Yellow-throated Vireo and the similar song of the Blue-headed Vireo, which we didn’t find.  I’m working on it.

Here is a “Rain Crow,” or Black-billed Cuckoo (Yellow-billeds were also called Rain Crows). These tropical looking super-cool birds are having trouble.  People have tipped the scales against them as they are slow fliers that used to move around staying in or close to the canopy of the forest.  Now that the forest is discontinuous, they must cross open areas where they are vulnerable to Peregrines, who seem to prize them over all other food.  Of course habitat loss, rather than Peregrines, is the overall driver here.  It was great to see them and hear their cool hooting song.

The “East” only has one hummer, but it’s a beauty.  A Ruby-throated on an decorative waterfall near Detroit Lakes. 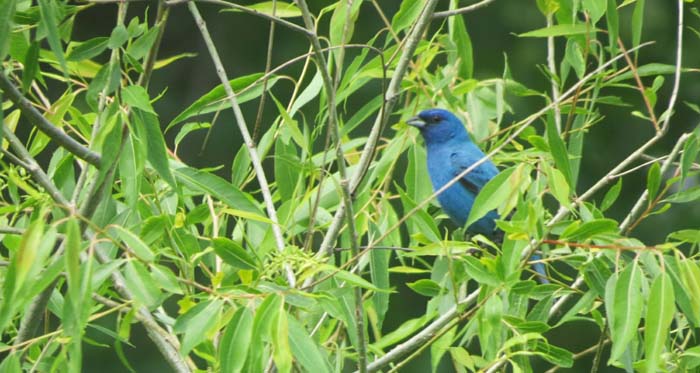 On the Red River, which flows North to Hudson Bay and divides Minnesota from North Dakota in the process, we found Indigo Buntings, a bird my paternal Grandmother urged me strongly to look for between 1963 and 64, and which was partly responsible for me getting into birding. 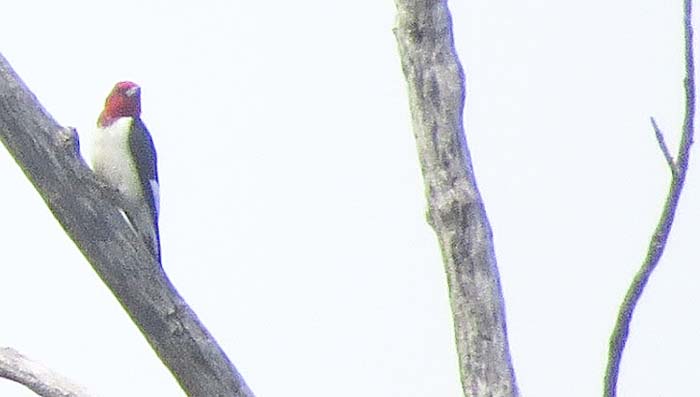 There was a Red-headed Woodpecker pair there also, sorry for the poor shot I was in MN and the bird was ND.

A Porcupine was lodged in a tree at Tamarack.

Brian Pendleton is a great travel companion.   I tried to call him today to ask him if he had a good Redstart shot from the trip, however and as usual, he’s not home but probably out running his 217th marathon or birding somewhere already.   (He might be doing both.  He has a “Birds-seen-while-running-marathons bird list of something like 235.)

You can help save the vanishing prairie by contacting these organizations:

American Prairie Reserve      http://www.americanprairie.org/     I don’t know anything about this organization, but found it on the internet

Also, I hope to get Brian’s permission to put up his Nelson’s Sparrow and LeConte’s Sparrow shot, but I think he’s out birding somewhere.

We saw 154 species, although Least Sandpiper is in question and the Baird’s Sandpiper was not recorded at the time but mined later by Brian from his photographs of distant shorebirds.  Here is the list, courtesy of Brian:

Yellow-headed and Red-winged Blackbirds live in the marsh fringes of the prairie potholes and add to the joy.

Please comment.  Unfortunately, I don’t have comments turned on so email me at ednewbold1@yahoo.com and let me know you left it.  I will turn it on ASAP.