Who knew they kissed so much!!! Friends Emily & John get Bear shots
13165
post-template-default,single,single-post,postid-13165,single-format-standard,theme-bridge,bridge-core-3.0.1,woocommerce-no-js,qode-page-transition-enabled,ajax_updown_fade,page_not_loaded,boxed,,side_area_uncovered_from_content,overlapping_content,columns-4,qode-child-theme-ver-1.0.0,qode-theme-ver-29.3,qode-theme-bridge,wpb-js-composer js-comp-ver-6.9.0,vc_responsive,elementor-default,elementor-kit-12768

Who knew they kissed so much!!! Friends Emily & John get Bear shots 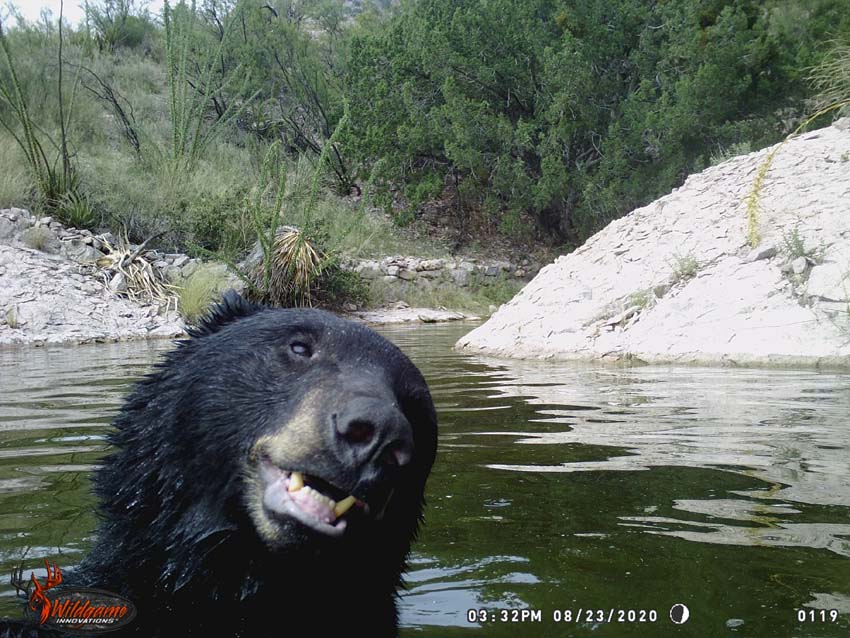 23 Sep Who knew they kissed so much!!! Friends Emily & John get Bear shots

Posted at 15:24h in sightings by EdNewbold 0 Comments
0 Likes

I didn’t know Bears kissed so much!

When our young dynamic researcher friends Emily and John suggested putting a game-cam at the wildlife tank just up-canyon from the house here, I thought, “Oh, that’s nice, maybe they’ll get some great shots of White-winged Doves drinking!”

They did! The Dove shots weren’t all that spectacular, however. But take a look at these! A mom visited alone  a couple times and then brought her “teenage” pup.  After the last visit, the Bears re-set the game cam so it would point straight up into the sky.  After the Bears did this it was out-of-focus Dragonflies day in and day out..

The shots from Emily’s cam included this Mother Bear self-portrait.

They also captured a number of very sweet mother-child-love moments, such as this kiss in the water.

And this where the mom is on the dam: another tender moment!

Here Mom swims to the left. This was a different visit, she didn’t bring Junior.

And here she swims to the right.

That is John Gorey and Emily Pollom.

Delia and I like nature and enjoy birdwatching. This young married couple is on a whole different level. They live and breathe Nature. They spent two four-month stints as the only humans living on an Alaskan island in the Bering Sea (Chowiat Island, sp) studying seabirds. They’ve studied birds on other Alaskan islands in the Pribilofs and the Aluetians and on one survived an 8 point Earthquake. “Earthquakes happened all the time on that island,” remarked John, who allowed that had they been where they had been the previous day they might not have made it.

We didn’t find any Horned Lizards this trip but we did find this Black-tailed Rattlesnake shown ambling across the driveway.

And this cute one by the Wildlife Tank.  Emily noted the preference of Rattlers to be around water and says “I always try to heighten my awareness when near a water source.”

And Delia found this much larger Western Diamondback near where the cistern was overflowing from the morning dew. It had a louder rattle also, proving this is a kindly snake.  Rattlers rattle to warn other critters and do not want any trouble.  Humans are in some cases exerting evolutionary pressure on Rattlesnakes to not rattle, as Snakes that volunteer their location with a rattle are sometimes shot.  This makes it worse for everyone.

This all matters to me because humans have an out-sized fear of Rattlesnakes. In places like Tucson where Rattlesnakes could be found, humans wage an all-out war against grass and small plants and ground cover. Everything is scraped off and ugly. Rattlesnakes do present a slight danger, but they are never and were never human-predators and to the last snake they do not want trouble with humans. They also keep the Rock Squirrels and other small mammals under control. People should appreciate them even if they can’t bring themselves to “love” them the way we might love a Vermillion Flycatcher or a Canyon Wren..

This bird is vocalizing. What a high-pitched sweet call it has, probably mainly a location call so it’s mate knows where it is. We heard it before we saw the bird but couldn’t convince ourselves that the thin high-pitched nose was coming from such a big bird.

It’s an Eared Quetzal, a bird that I believe first showed up in the US in 1991, only to disappear the following year. They appeared again in 2009 and held on a bit longer. This is their third push and it appears to be the strongest. Various experts have told us that there is already good evidence of successful reproduction in the Chiricahua Mountains and they are present this year in other borderland mountain ranges as well.

This is another shot of the male Eared Quetzal.  Delia and I were lucky to see this bird in the Cave Creek drainage near Portal, AZ.

Here is the male again,

This is the female. The two birds stayed close and were in constant communication.

One last shot of the Eared Quetzal, a back-view of the male. Nice blue!

I’ll end this for tonight with a shot of a Pyrrhuloxia taken from inside our friend’s house in Portal Arizona.