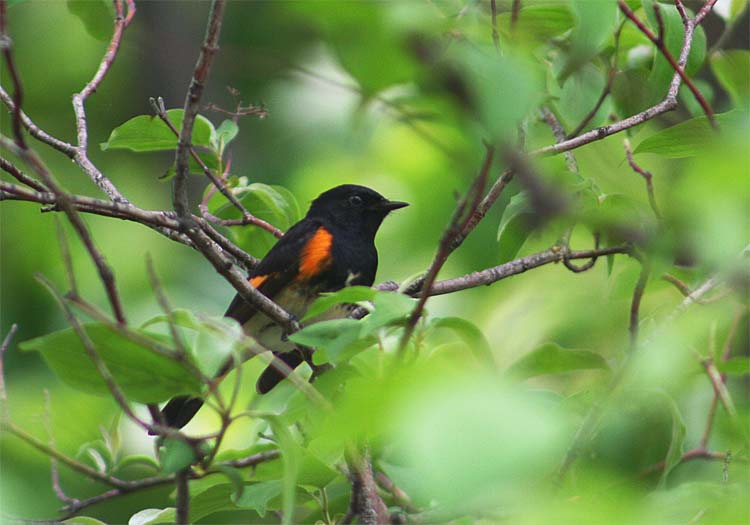 25 May The Great Midwest Warbler Safari

Posted at 00:45h in sightings by EdNewbold 0 Comments
0 Likes

Brian Pendleton and I got back last night from our GREAT MIDWEST WARBLER SAFARI.  We landed in Chicago on May 16 and birded beginning Saturday May 17 through yesterday May 23 at 3 pm in Indiana.  No, make that 5 pm, we had a Kestrel over the freeway in Chicago.  We first birded Chicago, then swung a bit west in Illinois, then to SW Michigan, then to Ohio, then to Central Michigan to the most southerly Kirtland’s habitat, then back to Chicago.

The trip caught the end of the bell curve of the migration.  Some including me thought it would be too late but there’s a good argument for going late, as you can still head north and catch the earlier birds on the breeding grounds, but if you go early, you will probably miss the late migrants.

We encountered the fabulous, amazing, unbelievable phenomenon that is MAGEE MARSH in Ohio near Toledo.  It’s like a Museum diorama of the Warbler migration except the display birds aren’t dusty and they fly around.  It is crazy that Magee Marsh is still free.  There will absolutely have to be a parking fee instituted to equilibrate supply and demand as people inevitably realize the treasure that Magee Marsh is.

We had the help of the indefatigable Ryan Dziedzic of Mt. Pleasant Michigan on Thursday in Midland County.  Ryan knows every song and every chip and is most pleasant to spend a 13-hour birding day with.  We recommend him.

(We really do recommend Ryan.  Anyone planning a trip to central Michigan should feel free to contact him at ryan.dziedzic@gmail.com   Don’t be scared off by price issues, and we’re certain he’d work well with folks of any varying degree of bird-knowledge.)

My epiphany for the trip was a Common Nighthawk that was flying perhaps a quarter-mile circuit route foraging over the tops of a woodland in Northeast Indiana at dusk.  She (I don’t know her gender, and when I don’t know that about a bird, sometimes I like to make it a point of saying “she” to counteract the millions of times we all have all called a bird that we didn’t know the gender of a “he.”) was exhilarating to watch partly for her size—this is a bird with a two-foot wingspan, and because each time she rounded the closest corner she came fairly close to me it was possible to get a feel for the speed she was maintaining and the power with which she came through the turn, all the while veering away from her course at erratic moments to catch her flying-insect prey.  Nighthawks—Long may they live!

On a sad note we saw first-hand the dead Ash trees all over the riparian woods and elsewhere.  This hugely important tree—(all three species), is experiencing a 100% dieoff of mature trees.  It’s shocking that we live in such a nature-indifferent culture this is not a particularly reported-on news item nor is it a talked-about issue on anyone’s radar, although I did detect real concern on the part of many of the folks we met at Magee and elsewhere about it.

Brian was a wonderfully great companion for the trip.  He’s a step-class above me as a birder, particularly in his ability with calls and songs, but our skills proved to be complimentary and we shared the characteristic of having grown up birding in the East, then spent most of our lives in Western WA, and never fully understood the magnificence of the Mississippi flyway and the Midwest Warbler season.  Brian also aided science by putting every stop on E-bird:  even on the way to looking for a life-warbler Brian would tend to counting photographing and appreciating birds like Song Sparrows.

This was like a candy store of colorful birds if you live in Seattle.  There were Scarlet Tanagers perhaps at nearly every stop, Rose-breasted Grosbeaks at most, Indigo Buntings and Northern Cardinals usually in the background, with a few cameos by the Red-headed Woodpecker.  We saw most of the Warblers numerous times and saw adult males in top plumage.  And some of the time, especially at Magee, finding and identifying the birds was, to borrow a phrase from our Michigan Guide Ryan Dziedzic, “like shooting fish in a barrel.”

Next are some pictures.  Brian took almost all the birds we saw and his shots will all be technically excellent.  I’ll try to get a link when they become available.   I only took the birds that insisted on being photographed, and I use the cheapest bird lense available on Amazon, which I then occasionally drop on rocks, but here are some shots: 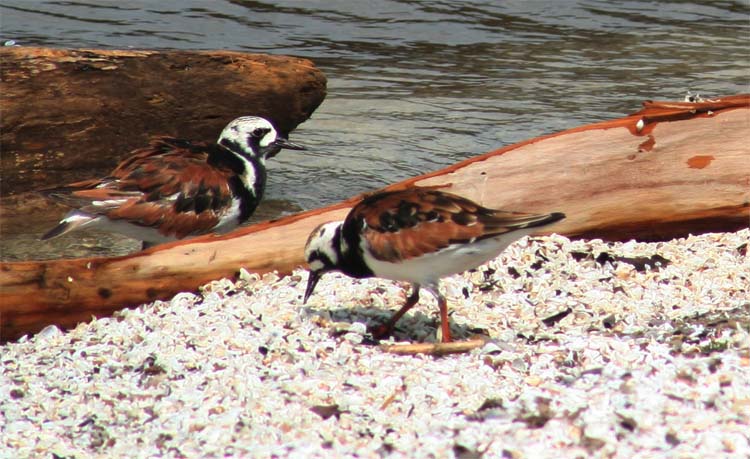 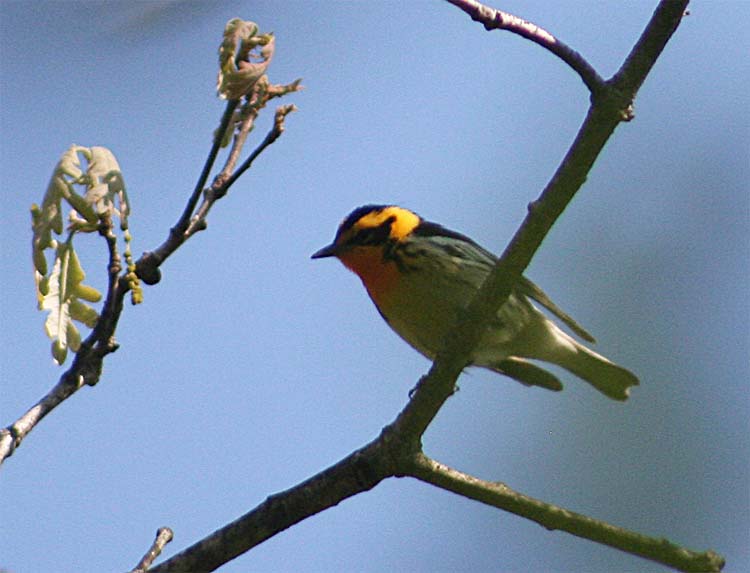 This shot doesn’t do justice to the Blackburnian Warbler, whose throat keeps changing from purple to orange in the evening sun 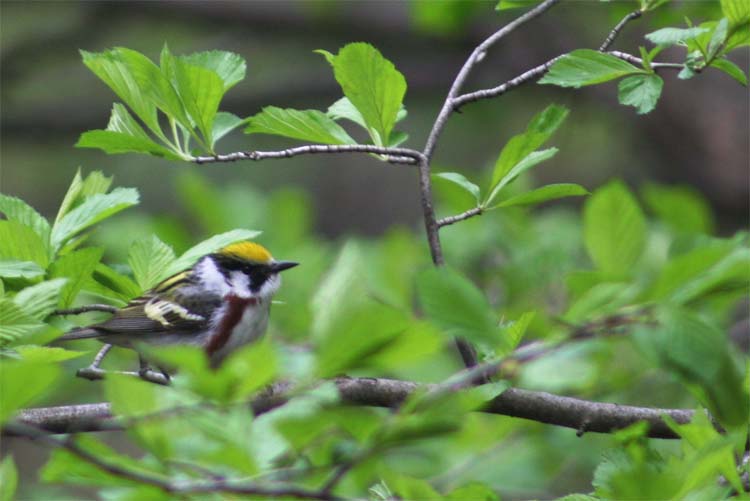 A male Chestnut-sided Warbler near Chicago. 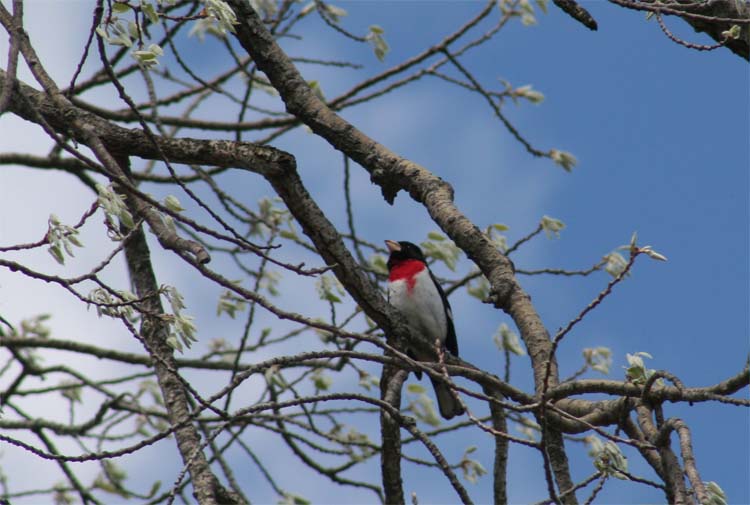 We saw Rose-breasted Grosbeaks at most stops. It specializes in heart-stops. 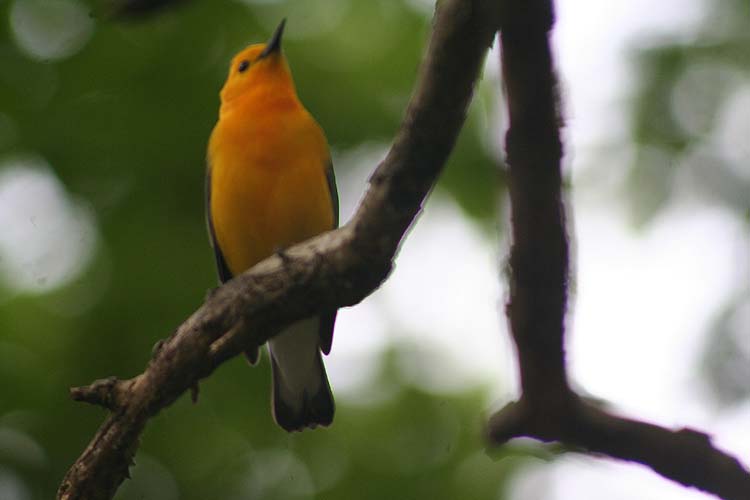 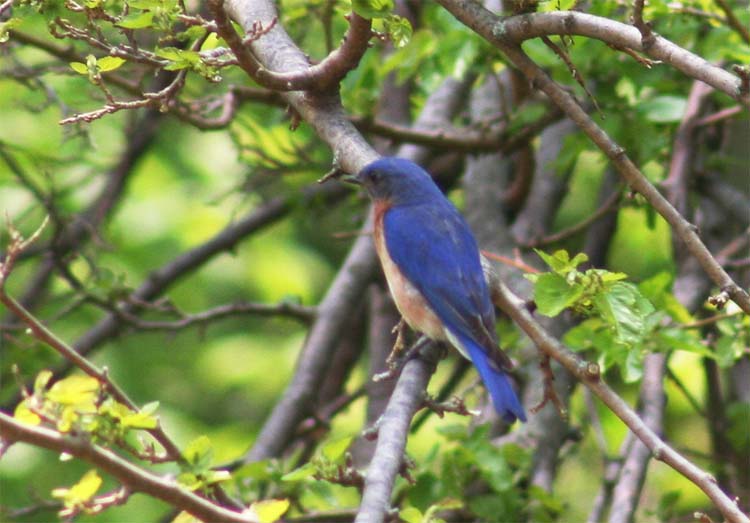 At a number of stops we had Eastern Bluebird, always a treat.. 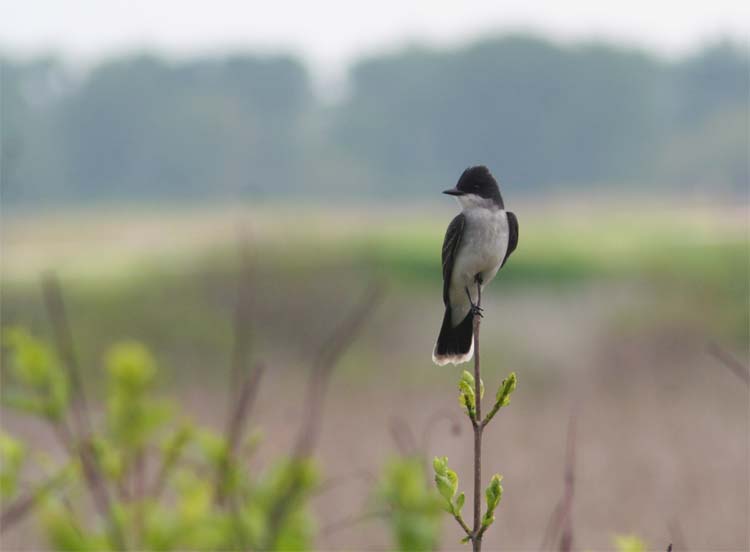 In my opinion, this shot of an Eastern Kingbird at Magee Marsh was the most artistic shot I got the whole trip 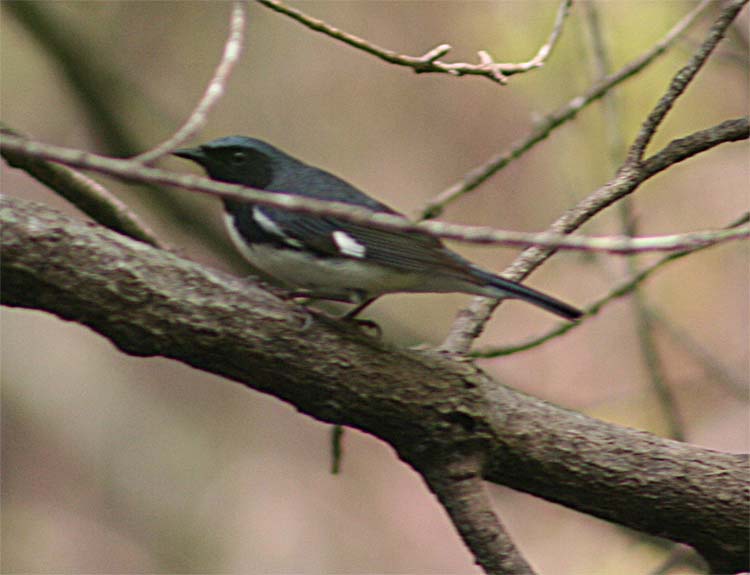 The Black-throated Blue Warblers were already mostly through when we got to Magee, but on Weds at least 2 males and 2 females showed up. 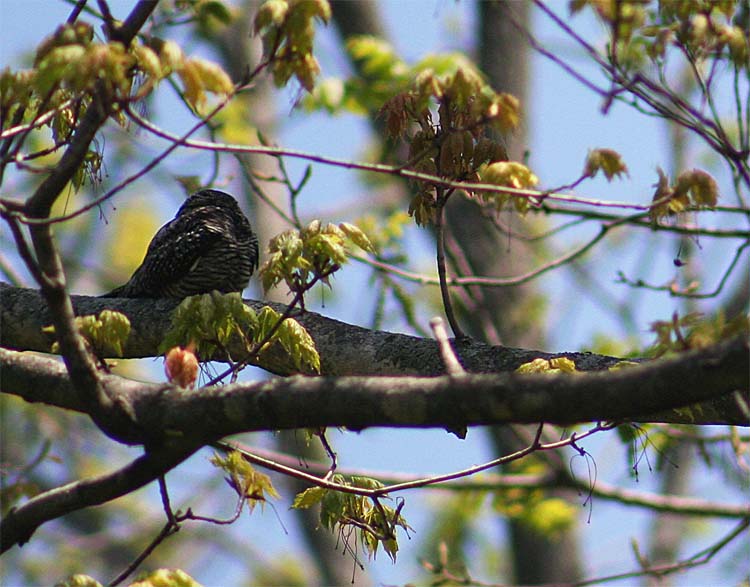 Common Nighthawks are most impressive in flight. This one was sitting on a branch in NW Illinois 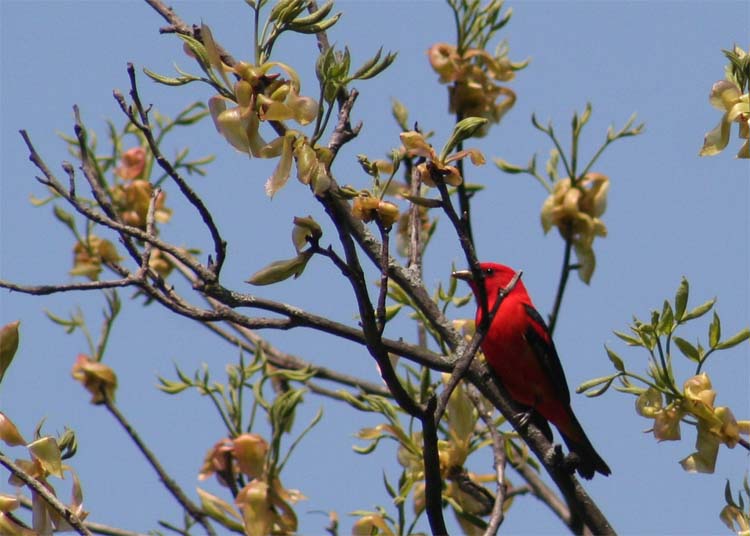 There were Scarlet Tanagers at most stops. This Illinois bird had red upper wingbars. 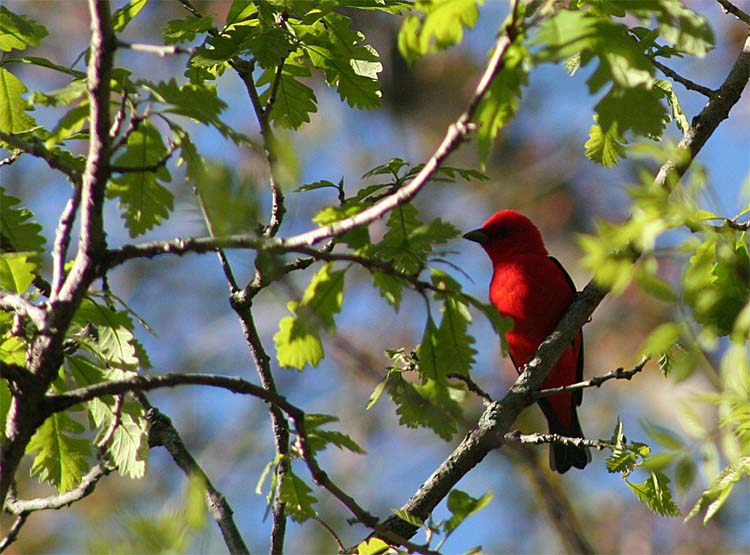 It’s impossible not to try to photograph a Scarlet Tanager if there is a camera in your hand. 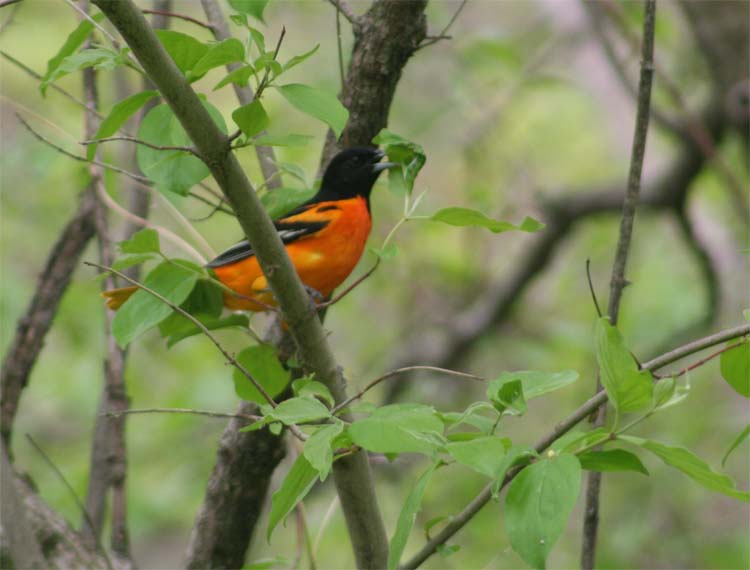 What can you say about Midwest birds. Here’s a Baltimore Oriole. 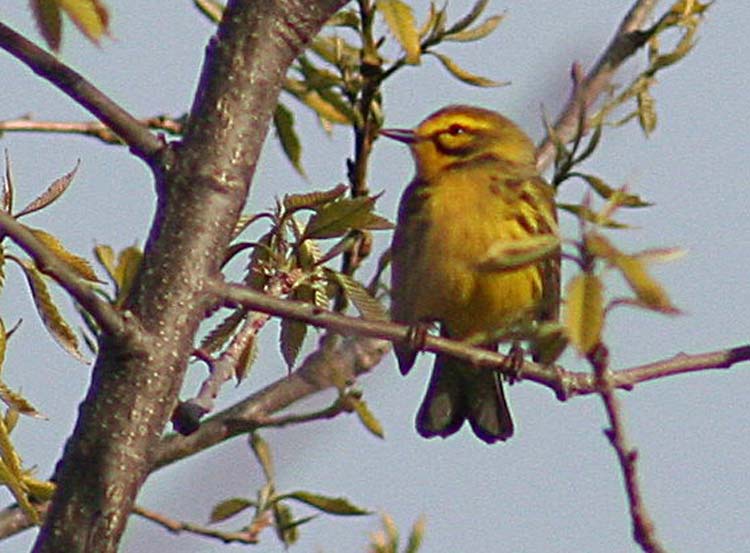 We only saw one Prairie Warbler, which is having conservation difficulties 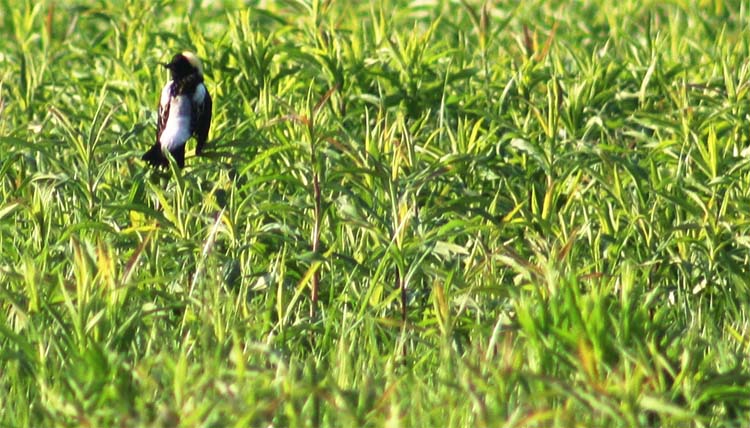 Bobolinks are constantly partying–or is it fighting? I’ll have to read up on them 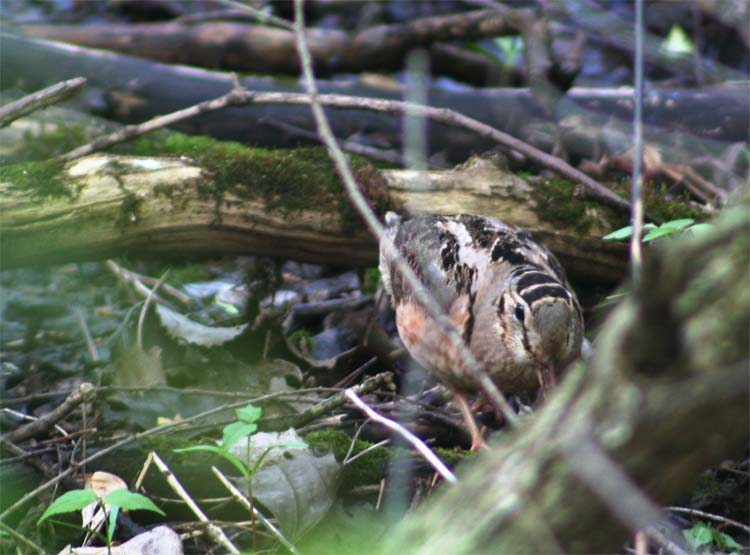 I hadn’t seen a Woodcock in ages. This was at Magee Marsh, but we also kicked one up in Michigan 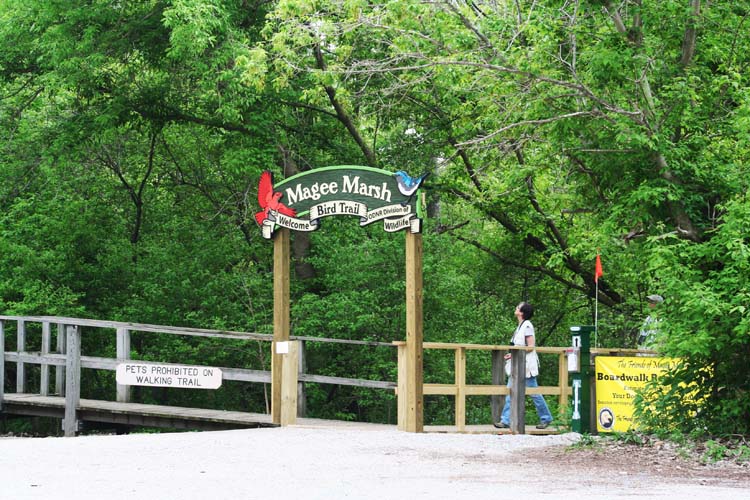 The entrance to the Magee Marsh boardwalk 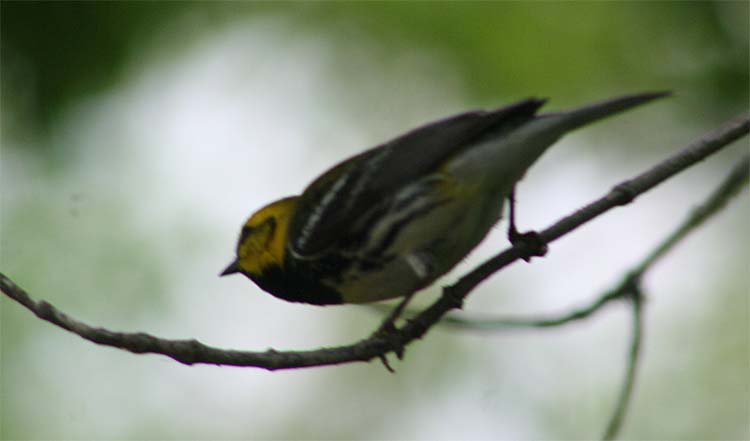 A truly poor shot of a Black-throated Green Warbler, which is one handsome warbler. 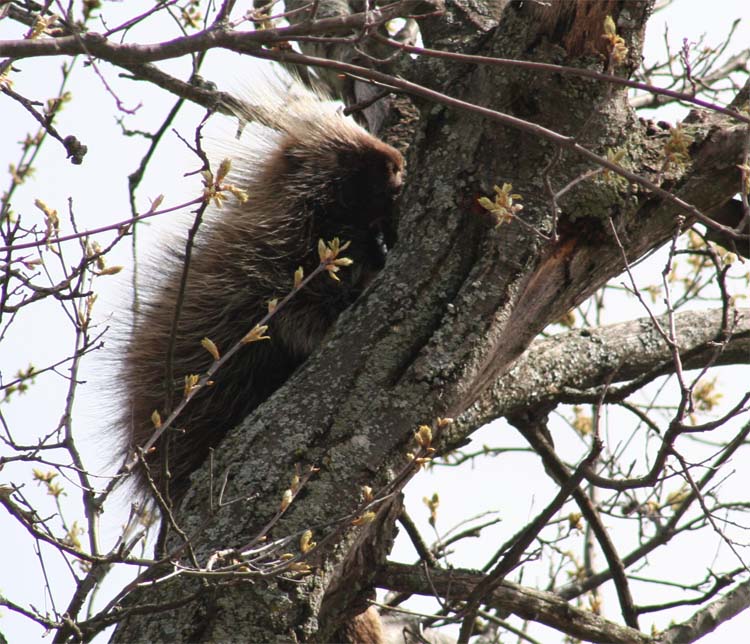 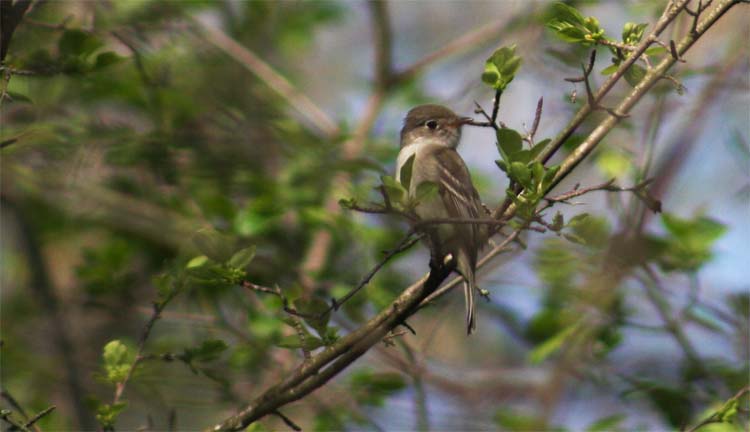 This is an Alder Flycatcher. We had all five Empidonax flycatchers singing in plain sight, never happened before for me. 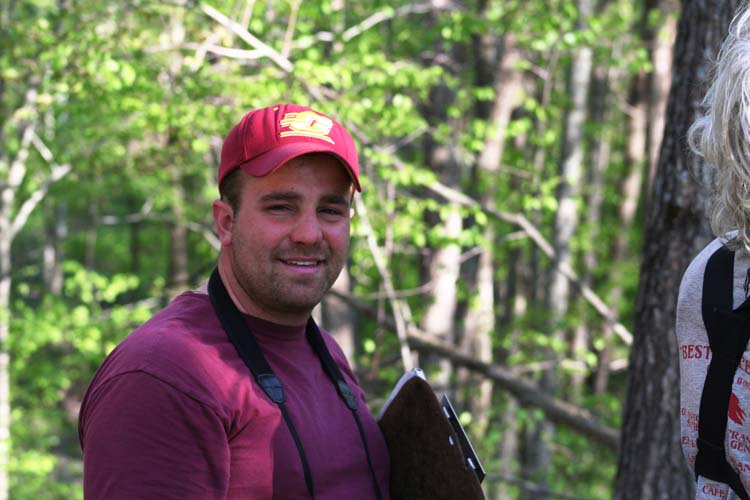 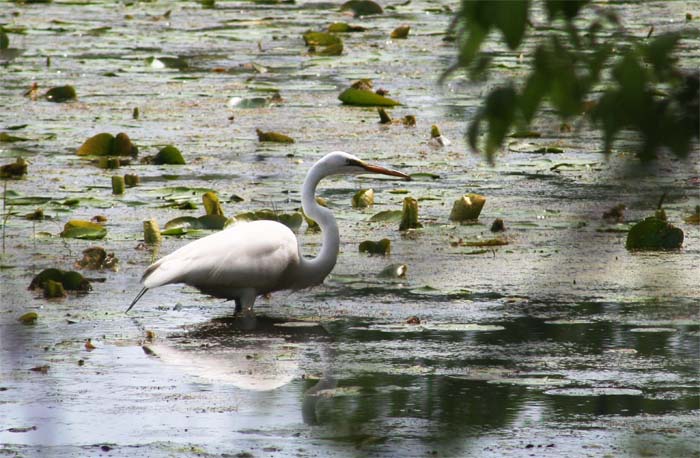 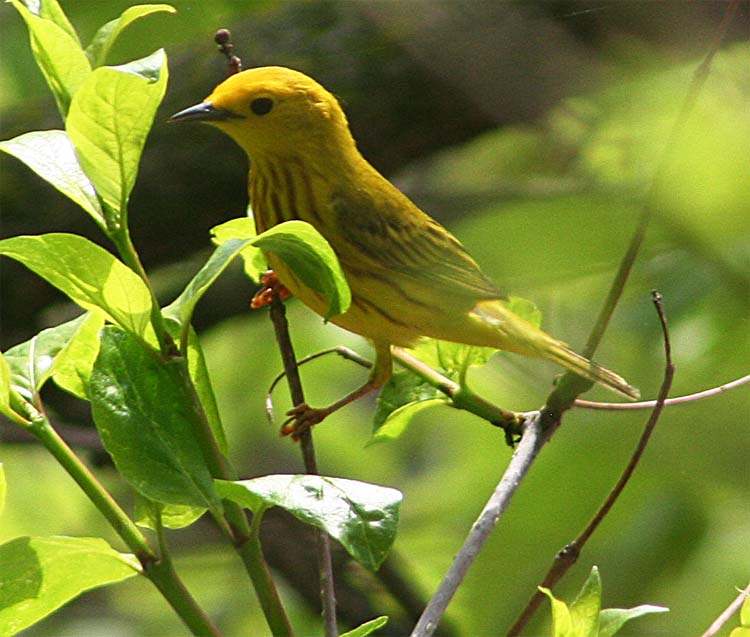 Especially toward the end, Yellow Warblers became the most common warbler but there sure were a lot of Magnolias, which moved too fast for me

Now here is our list of 165 species all seen unless noted as heard only:

(If you make a comment on the blog be sure to email me so I will know there is actually a comment there not just a hundred more spam messages.  I love comments btw)