It’s Christmas and the Paradise Painting is still not ruined!
10411
post-template-default,single,single-post,postid-10411,single-format-standard,theme-bridge,bridge-core-3.0.1,woocommerce-no-js,qode-page-transition-enabled,ajax_updown_fade,page_not_loaded,boxed,,side_area_uncovered_from_content,overlapping_content,columns-4,qode-child-theme-ver-1.0.0,qode-theme-ver-29.3,qode-theme-bridge,wpb-js-composer js-comp-ver-6.9.0,vc_responsive,elementor-default,elementor-kit-12768

It’s Christmas and the Paradise Painting is still not ruined! 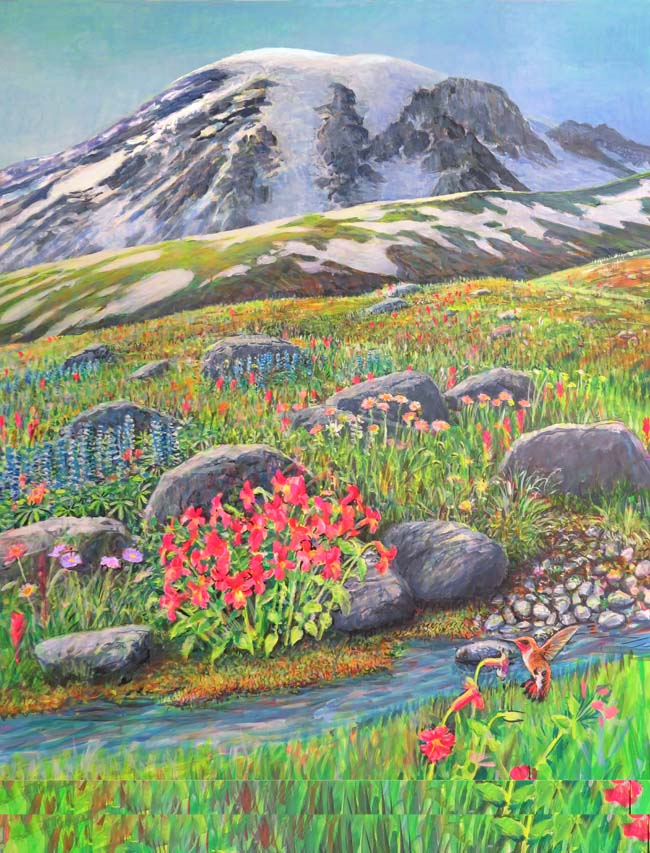 02 Oct It’s Christmas and the Paradise Painting is still not ruined!

Posted at 20:51h in On the Easel by EdNewbold 0 Comments
0 Likes

Most of 2016 and 2017 I was curating painting files and writing my book.  Those two endeavors are winding down a little bit and I’m picking up a brush again, and gosh am I a happy camper about that!  My progress will be shown on this blog. 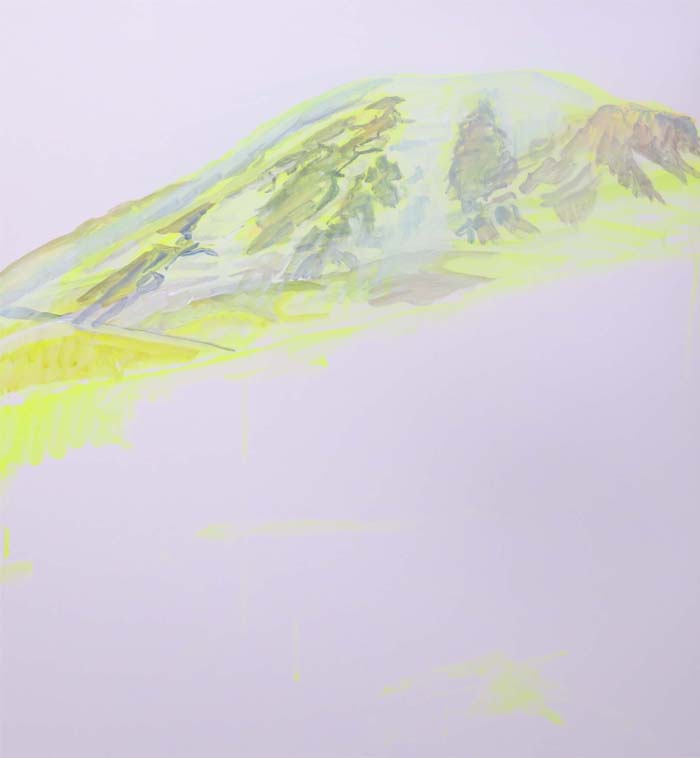 I am very excited about a new painting I recently started of Paradise on Mt. Rainier.  We took a trip up there in late August and I couldn’t help but notice two Rufous Hummingbirds whizzing by in the high alpine zone.  They head up there after breeding down in the NW lowlands. They are notorious up there for not staying in one place.  All you usually see is them buzzing by.  But seeing them made me decide to use them as a subject in a painting of Paradise.  The alternatives I could think of were a Bear, which we saw up there but I thought would overly dominate the picture, several species of raptor which we didn’t see on this trip, or a Marmot.  I’ve gone to the well quite a bit with raptors and I suspect a rodent, no matter how well-coiffed, would be a dealbreaker for many people, maybe that includes me, much as I appreciate rodents as part of the Creation/biodiversity. 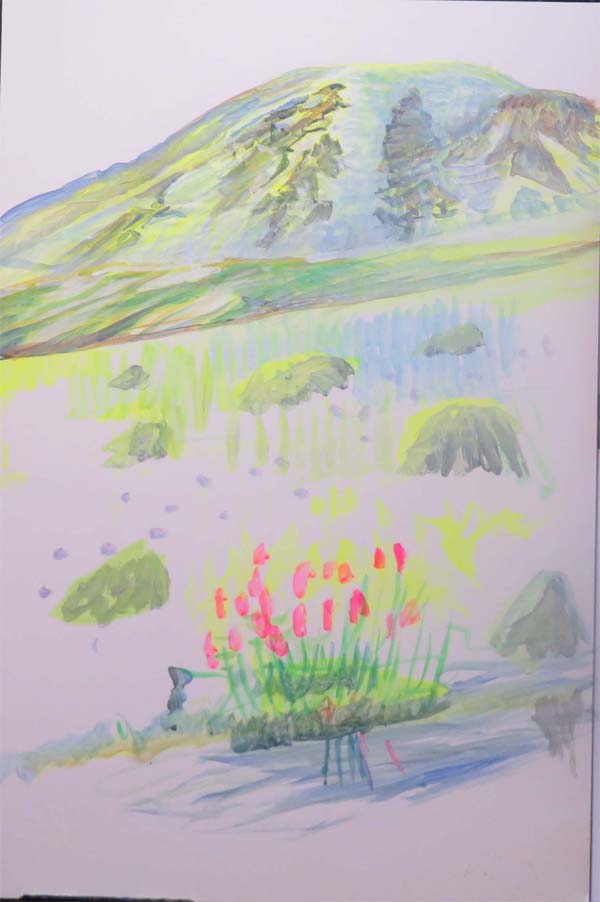 Also a  subject of this  painting are the wildflowers.  They were past their prime but nonetheless amazing when we visited, with Scarlet Paintbrush dominating in many areas,  and quite a lot of Asters.  The Lupine were on the downswing.   But in central position in the painting I decided to put a cluster of MonkeyFlowers Mimulus guttata.  They were growing around creeks and open water that was still around from melting snow, certainly not rain as there hadn’t been any of that for quite a while.  I presume the Hummers like them. 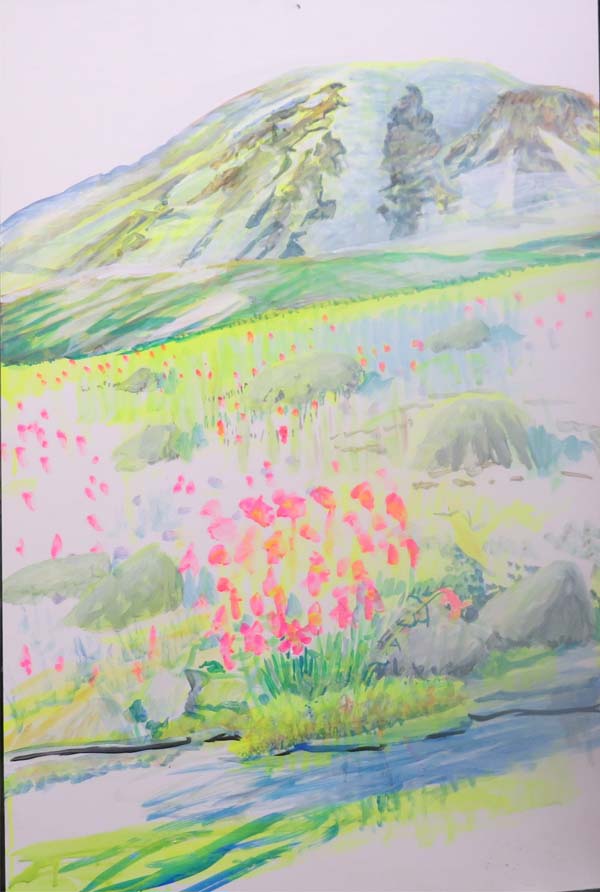 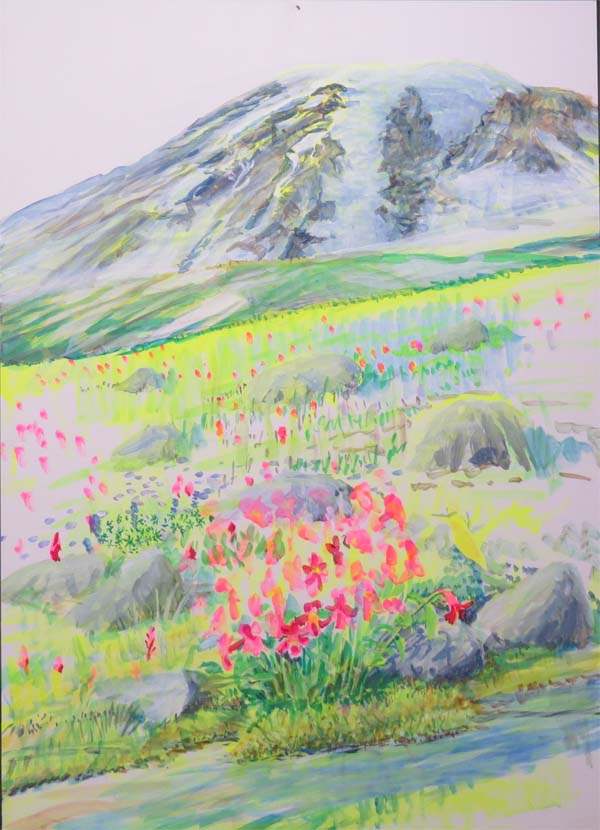 This is sort of normal for this point in the painting but there’s a fire lit to get this to the store as soon as possible.  This October 2, I’m going to try and detail out the mimulus more today and fill in the Rufous Hummingbird.  I’m still a bit torn between male and female, since which one is prettier is a tossup, but leaning toward male and looking for some good reference shots now. 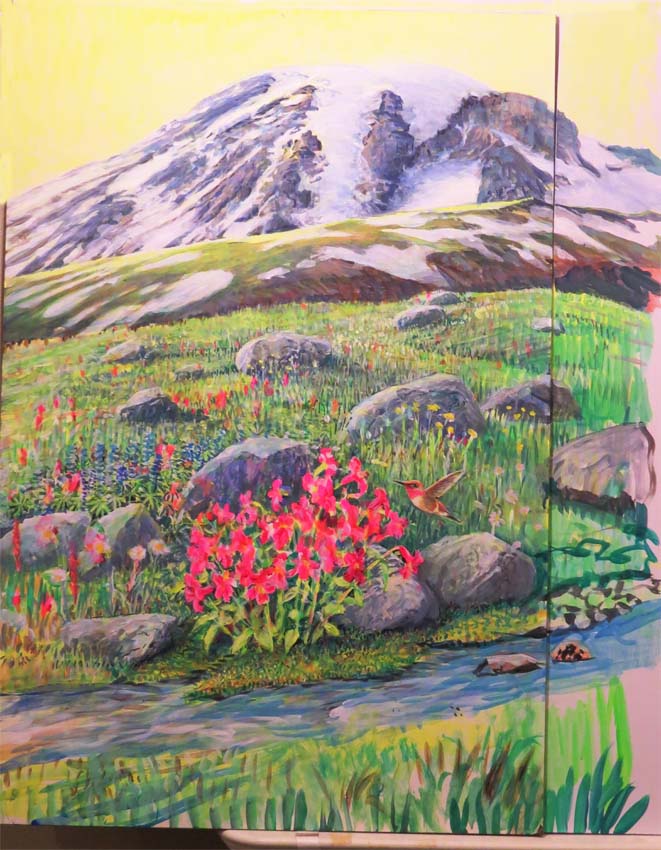 When I brought the painting upstairs and looked at it during the course of a day or so, I found the composition bothered me.  I wanted more diagonals going down to the right to balance the strong diagonals going up to the right, but it wouldn’t be possible the way the painting was conceived.  So I did something I occasionally do, which is add substrate, this time on the right.  The painting is on masonite, I added a piece of foamcore on the right, which is obvious because of the black crease in the painting on the right.  When I go to make a print, I can easily eliminate the border line with Photoshop. Next session I’ll bring the right hand foreground up to keep it high enough to generate a stream.

This is a good example of how much I don’t care about originals anymore.  It’s all about the print.  This painting will always have a big crease in it, and will be unsellable, but who cares, because the print is what matters and it will only take 15 or 20 minutes to completely eliminate the crease from the image that is going to get printed.   I’m wondering if I want to leave the yellow sky.  I doubt it, but for the time being, it seems to work. Going blue is always a danger because it’s so hard not to be forced darker than you want to go because of the pigment colors in the paint.  Blues are hard to work with in general.

I’m trying to get some asters into the painting, and I’ll need Photoshop for them for sure.  There is no pigment I know of that matches the color of the petals of aster–sort of a light lavender-blue–that will pop.  I can mix what I think are the correct colors together, but when you apply the resulting mix, it’s a dead ringer for gray.  If I settle on Asters, I’ll definitely turbocharge the color in Photoshop.

We had a white Christmas here on Beacon Hill in Seattle! Delia and I took a walk, and I got this file of Paradise ready.  I added more canvas on the right and moved the Hummingbird, and am adding flower in the lower right. I think the name is becoming Late summer in Paradise, as there will be lots of Aster and that forces the calendar to later than high summer.  These were all blooming when we were there in very late summer. I’m working on the file and the painting, which is a bit weird as one will end up having been redundant.  Hope to work a lot more on the Lewis’s Monkeyflower, the pink flower cluster in the lower middle.  Would like to achieve quite a bit more realism on the Hummer.  I’d like to make it look a lot less lush with more open dirt and rock but no less colorful, to convey the rawness of the high country better, but not sure I’ll be able to.  We’ll see how it goes. 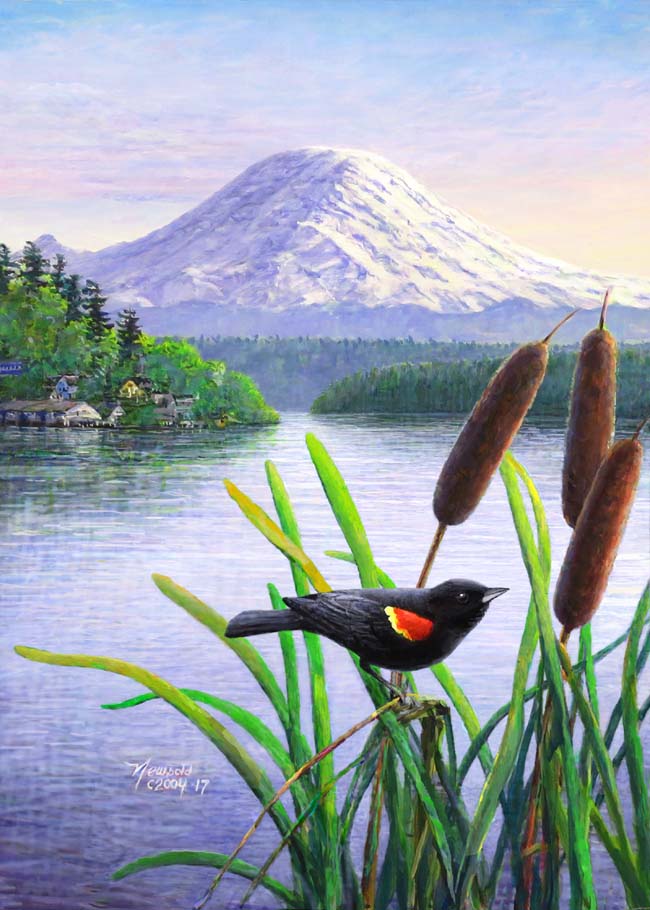 I’m also still working on Redwing and Rainier. Am I nuts or is this my best painting ever? It’s available at the store in this remastered version along with the original version.  Both are moving.