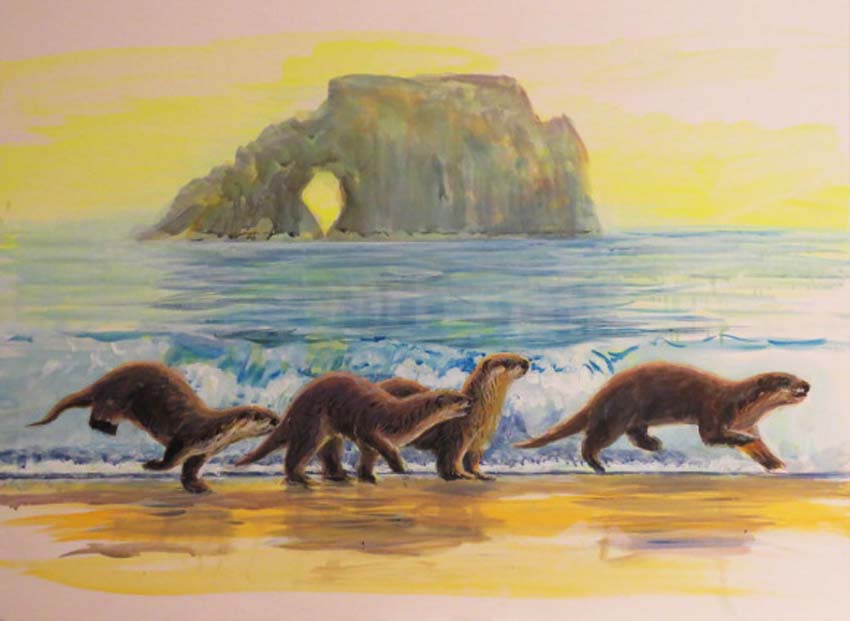 Posted at 01:07h in On the Easel by EdNewbold 0 Comments
0 Likes

Posted from Seattle WA on March 20, and updated on April 5th, 2020 in the time of Corona

My friend Paul (not Newman) likes to go out to Cape Alava and spend a few nights.  He and his cousin were at hole-in-the-wall when they witnessed a gang of 4 River Otters running along the beach.  They got some video.  The movie, though taken from a distance, manages to convey the utmost exuberance that few animals including humans can seem to possess more of than River Otters.

Here’s one of the photos Paul took. I used the poses from this one. This is the first time I’ve looked at the ref shot and the painting side-by-side so to speak. Maybe I should use the sea and sky atmospherics of the photo as is and not run a sunset in it. I have lots of time now that the store is closed. Also, maybe I should try to get the beach to run at a diagonal, as it is in the photo.

This is April 5th now, what the painting looks like now. I put this up on the computer now, but it’s possible I should keep on real-painting it for a while longer before computer-painting on it. Computer-painting is much slower, surprisingly, at least the way I do it.

I’m still putting time in on Red-crowned Parrots, the endangered species that has taken up residence in Brownsville Texas but is having great difficulty in it’s mountain homeland to the south.

Bear Family is at first-finish and will be out in 6 x 8 print for 8 x 10 mat soon.  I am waiting for ideas to make the mountains look more realistic.  The scene is based on Ptarmigan Ridge near Mt. Baker.

I’m still moving forward at glacial speed on Paradise, now being published with “Mt. Rainier” rather than “Paradise” as the poster title.  I just finished the book “The Good Rain” by Timothy Egan.  Maybe I should put one of the Tribal names for the mountain on the poster.

I have a new painting that I have high hopes for, in fact which is intended to be my masterpiece.  That is not a seagull in the painting.  (It’s a Caspian Tern)  I think a print or two have sold in the medium 6 x 18 size but now the store has been shuttered.

I am also bringing out a version of Caspian Tern without the Tern and at night.  I have to continue “turning on” more lights.  I think I’ll call this print “Seattle at Night.”   I never claimed that all my titles were brilliant.

The name of this painting is undebatable.  It is “Stella.”  Meet Stella, a French Bulldog.  I do not do commissions and I do not paint domestic animals, that’s a rule I follow assiduously.

Stella is something of a hero-dog who may well have saved a life.  Stella and I have met.  I maybe did break a rule but if so:  Blame Stella, not me.

I’ve been working more on Hummingbirds of Costa Rica in hopes of offset-lithographing it sometime this year or 2021. Everything is getting moved back these days, here’s hoping the postponements aren’t eternal.

This is a 20 year-old-painting I have been working on intensively. I am very happy with the fixes that I’ve made on the perspective, the atmospherics and the plumage of the owl. It’s a Short-eared Owl at North Fork Access in the Skagit Wildlife Recreation Area. I’m printing it soon as an 8 x 10 and in other sizes later.