23 May In Climate Battle, Oregon leads the retreat

I’m running a low-rise ad, shown above, in the Seattle Times on Tuesday May 24, 2016 that should appear in the A-section.  The ad singles out Oregon but is implicitly critical of the movement of DoTs nationally, including US DoT,  to publicly undermine the gas tax in order to set the stage for its replacement with a per-mile road-use fee.  Oregon is actually testing the technology for a mileage-based system.
Here is the text so it is searchable:
Kicker:
Trying to ditch the gas-tax
Headline:

Text:
DoTs dislike the gas-tax precisely because it’s so effective at reducing fuel use.
Oregon is leading the national movement to replace the gas-tax with a per-mile fee that would, if anything, encourage drivers to opt for less fuel-efficient vehicles.

DoTs dislike the gas-tax precisely because it’s so effective at reducing fuel use.

This point was made as a prediction eight years ago in the Seattle Times by Andrew Garber in a transportation opinion 92 29 2008):  “The growth of state gas-tax revenue is slowing, and, as vehicles become more fuel-efficient, officials predict tax collections won’t keep up with the cost of maintaining and improving the transportation system.”
Countless DoTs have made the same point since, and seemingly never with any touch of irony that this trend toward fuel efficiency—and the consequent fall-off of funds– is happening precisely because the world’s most dire problem—climate change and the drought-effects it brings– is being solved.
(The world’s most dire problem.  That’s a judement-call as there are many problems but anyone who disagrees should consider just one case in point: Syria.  Syria is imploding because of pollution-induced climate-change.  The political factions in Syria were never in love with each other.   It was only when heat and drought made agriculture impossible there that the country became engulfed in violence,  just as a weakened host become vulnerable to a parasite that a healthy host could keep in check.)

Oregon is leading the national movement to replace the gas-tax with a per-mile fee that would, if anything, encourage drivers to opt for less fuel-efficient vehicles.

Oregon ‘s DoT is currently leading the nation’s DoTs in attempting to implement an all-new billing system a per-mile fee to be charged at the pump based on a reading from a car’s transponder which, by the way,  the Oregon DoT optimistically assumes it can make the motorist pay for.
If this was the right thing to do, I personally might be ok with paying for something like that.  If it was fair and equitable and would help to solve our pollution, noise, fatality-and-injury problem and reduce global climate change, I wouldn’t necessarily mind the cost or the privacy-implications of the government knowing exactly when I drove to the Post Office last Thursday morning.

But Oregon’s transponder represents a huge battlefield retreat on climate change.  If  a driver is going to have to pay the same amount for a trip road regardless, they might as well drive the biggest, most gas- guzzling vehicle they can.  A fuel-tax encourages a driver to want to take a smaller, less- dangerous-to-others, less polluting, quieter, less-damaging-to-the-road vehicle.  A per-mile toll tosses all those incentives into the dumpster. 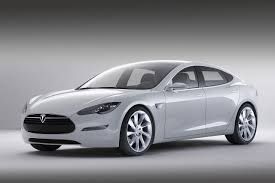 Any excuse to put a picture of a Tesla S in the blog.

It’s ironic that transportation officials point to the rise of electric cars as a problem with the gas tax, since the demise of the gas tax may well spell the end of that rise, which so far has been relatively miniscule anyway.  It’s also ironic given the fact that electric cars receive direct subsidies from government that far exceed the amounts they don’t pay in gasoline tax.  But put me in the camp that says the gas-tax does need an electric-car fix.  But the amount should be set in concordance with the energy costs of the car, as if the electricity was being measured on the same BTU scale as the gasoline tax.  The tax could begin as a stupid- tax, the same for everyone, that would simply be an amount added to the car tabs and eventually, ahem, there might me a need to increase that as a stick to get drivers to use a transponder like in the Oregon system, however, again, the rates should be proportional to energy use rather than miles driven so that the tax more closely represents the real cost of the ride to society–that is pollution health effects, roadwear, noise, pollution Climate-affects and danger to others are represented in the price the driver pays.