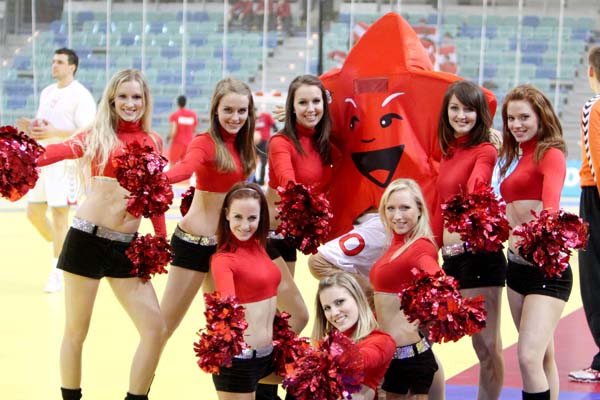 I'm pretty sure these were cheerleaders at the 2010 Men's Handball Tournament. Either that or reporters who had just turned in stories about biofuel to their respective news editors.

How did it become firmly implanted in reporters’ heads that whenever the subject of biofuels comes up, they are to set aside their reportorial training and don pom-poms and cheerleader outfits?

The long tiring list of biofuel cheer-packages was added to today by KUOW when Ashley Ahearn posted a story about a company that has developed a biological process to extract ethanol from “seaweed.”

The story began like an advertisement: “Those floating mats of brown seaweed you see along the coast might make up part of the ethanol in your gas tank someday,” and continued in the same vein.  “Scientists,” according to Ahearn, “believe seaweed could be an idea feedstock for biofuel. It grows faster and produces more biomass per square acre than corn – and it doesn’t compete with other food crops for water use or farm acreage. “

No mention was made of  the controversial aspects of all existing biofuels,  and there was no nod to the fact that fisheries and an ecosystem in the ocean are already dependant on “those floating mats of brown seaweed…”

I should be clear that I favor research and pilot projects to see if new technologies are any good, so I am interested and will have an open mind when these produce results.

But biofuels are not like other products of the market, like Hyundais, e-readaers, or tooth paste.  They are willed into existence by political action and survive on a foundation of a mandate that forces consumers who drive gasoline-powered cars to purchase them.   If we are going to rain favors on one industry, it’s fair to want to know if that industry will have unintended consequences on the world.  Ethanol has already been responsible for starvation, extinction, high food prices, groundwater depletion and the increase in the dead zone in the Gulf of Mexico.

It’s unconscionable for a reporter would not alert a drowsy morning listener to the possibility of a downside about a new source of biofuel when all the old sources have proven to be replete with them.