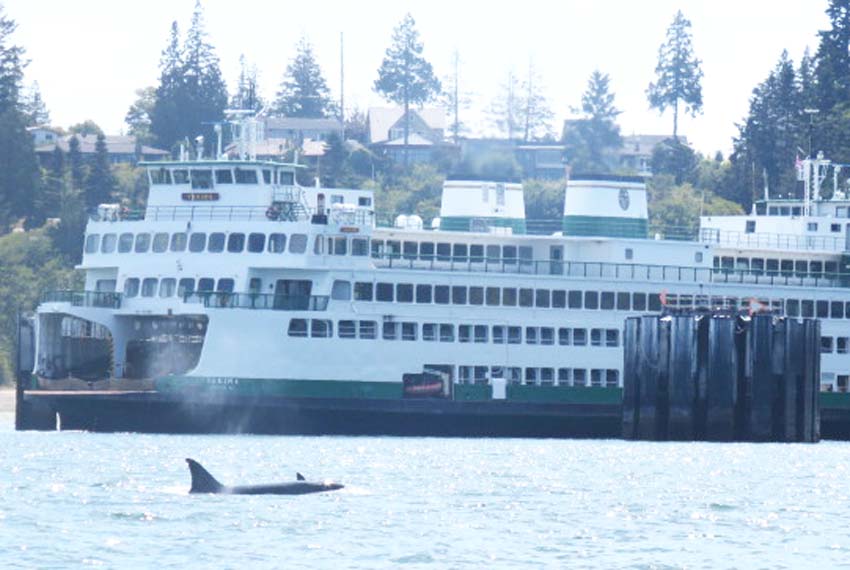 Posted at 02:36h in sightings by EdNewbold 0 Comments
0 Likes

Sometimes people say “This is a beautiful day.” The comment is usually meant to mean sunny with blue sky, the absolute worst and most boring, unaesthetic conditions possible for photography or nature viewing. To use the latter worldview, we have yet to have a beautiful day this summer-they’ve all been sunny with a blue sky.

But here’s a shot you don’t get every day. We were on a chartered run out to see the seabird action at Smith Island and already headed back to Anacortes when the pilot got word of Orcas at Anacortes. This is a shot of a young and presumably mother Orca in front of the Anacortes Ferry. These are Transients, I’m pretty certain, the ones that prey on all manner of large items particularly Harbor Seals. Unlike the beloved Southern Residents, they will show up anywhere and thus might be perversely good for the whale-watching industry. I am nothing close to an expert, but I presume their reduction of the Harbor Seal herd, though I of course adore Harbor Seals, may be good for the eco-system.

Here is another Orca surfacing in front of the Anacortes Ferry, or maybe the same one? There appeared to be a young adult male with the group also (below). Delia spotted a Minke Whale south of Smith Island, which we watched for three surfacings, so it was a two-Whale species day.

There were many seabirds in the Kelp beds at Smith. The most abundant were Rhinocerous Auklets but there were lots of Pigeon Guillemots, Pelagic Cormorants, some of the other two Cormorants anda Murre or two plus the birds we had more or less come for: About 20 Tufted Puffins and one very-rare-here Horned Puffin. Above is a shot of mine of a Tufted Puffin.

And here is what passes as a photo of the Horned Puffin. This is called an ID shot in the birding business, and if you put a shot like that up on e-bird you hope nobody rates it.

Charlotte and Bill Byers of Edmonds were on the little boat as well, and unlike yours truly, they are real photographers. I’m going to try to get their permission to post shots they sent of a Tufted and the Horned, that I will not raise expectations about to be fair to them. You’ll get the idea anyway. (See photos next blog).

We went up to Big Four on July 18. Those are big mountains, I think they are the western foothills of the Himilayas.

We found this Pacific Wren singing its heart out in the woods there. Pacific Wrens don’t sing any other way though. For such a small bird, they make a lot of noise and it’s a beautiful song,

This is Darchelle Worley, Brian Pendleton, Delia and Ellen Stepniewski at Big Four. That’s what happens when you try to photograph birders. Andy Stepniewski is quick to roam and was up the trail.

Here is a lineup of one of my favorite birds, Caspian Terns, in Kitsap County south of Foulweather. We need some foulweather.

This is a Bullock’s Oriole at our friends house near Hansville.

Here’s a Stilt Sandpiper that was at Wylie Slough in Skagit County on August 27, 2021. It’s a juvenile, the adults are quite dashing.

And here’s a Ruff that showed up in the Puyallup Retention Ponds, the adults are even more dashing than Stilt Sandpipers, but it helps to go to Eurasia to see them.

Here is a beautiful Little Stint in front of a Western Sandpiper that showed up in May at Leque Island near Stanwood. This is another Eurasian bird, one that shows up even less often in the US than a Ruff.

Sorry comments are closed, my email is ednewbold1@yahoo.com.