Mad Dash to finish “Shorebirds” before the Shorebird Festival

13 Apr Mad Dash to finish “Shorebirds” before the Shorebird Festival

Posted at 04:34h in News, On the Easel by EdNewbold 0 Comments
0 Likes

Scroll down for April 17 Update!

It’s official!!!   I’m going to be at the Gray’s Harbor Shorebird Festival, the big shindig in honor of the thousands of shorebirds that migrate through the Gray’s Harbor area in April and May.  The headquarters will be at Hoquiam High School on Fri-Sun April 27-29.

Going to a big Shorebird Festival with no new shorebird paintings is not an option.  That’s a non-starter.   Telling people you don’t have anything new is never any fun.

That’s why I’m in a mad scramble to finish this painting.  I’ve got to resist the temptation to keep adding birds.  What I have is done at extreme high speed, in fact, I started this this morning, but things always go fast in the beginning, before the inevitable bogging down occurs.  The key here is to keep up the speed.  Sometimes that has a favorable effect on the quality anyway.

The species diversity is high for Bottle Beach, where the scene is envisioned, but not impossible.  All these birds were there the last time I was there, in April of last year, but not in these close quarters and not with so few of the standard species, which are more or less Western Sandpipers, Dunlin and Short-billed Dowitcher.  Also in the painting are Black-bellied Plover, which is the big one, a Red Knot and a Ruddy Turnstone, the colorful one, although they are all colorful.  I’d like to stick a Semipalmated Plover in but it might lose credibility.  They are pretty common there but if I max out on diversity of species with a tiny number of total individuals it won’t look like what you normally see at Bottle Beach.

Some may say it already doesn’t look like Bottle Beach.  Isn’t that sunlight flooding the picture?

See you at the Shorebird Festival!!! 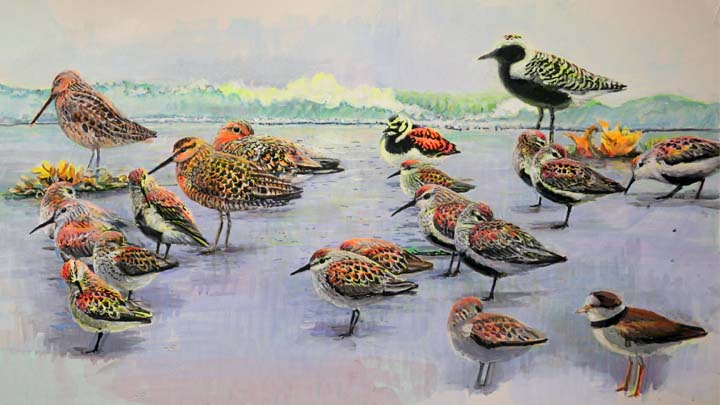 This is what the painting looks like now–April 17, 2013.  I seem to be sacrificing realism in this scene a little bit, I fear that introducing a more naturalistic color of the beach, what will all the umbers that you get in WA state, might overcome the painting with dreariness.  The thing is, I don’t have 6 months to dink around on this, I’m basically really happy with it, so I’m going to go for an early wrap-up on the painting and try to get it photographed and published in time for the Shorebird Festival.    Maybe I’ll do one really big print of it to double as a sign at the Festival. 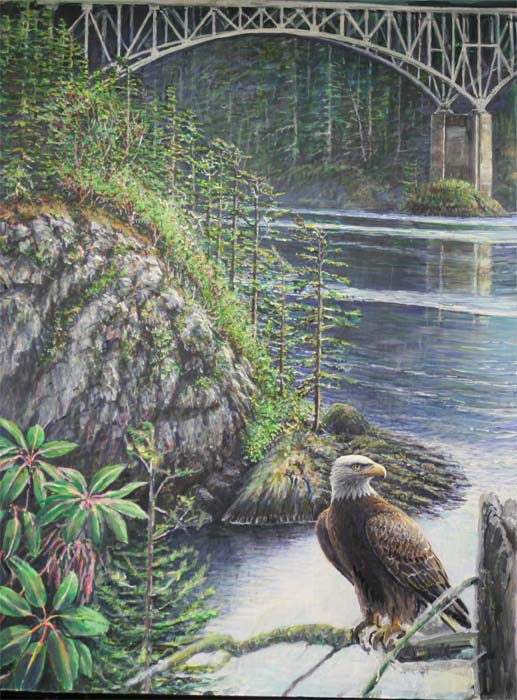 While I’m updating, I’m putting 97% of my effort on shorebirds, but I couldn’t help trying to get the Eagle at Deception to work.  This is where it stands now.  I’m curious, if I have two versions at the store, one with an Osprey and one with an Eagle, how they will sell—It’s not a given that the Eagle will do better.  I’ve never found Eagles to be all that easy to sell, which could reduce two ways, either having to do with their popularity or my ability to paint them.

But I digress–See you in Hoquiam!!!