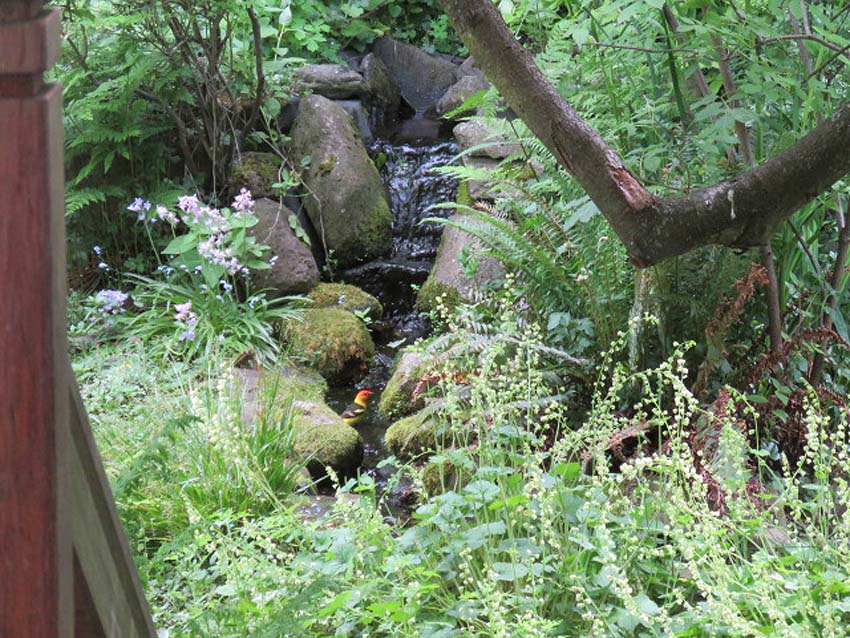 10 May New wave of bird migrants on Beacon Hill

Posted at 02:24h in sightings by EdNewbold 0 Comments
1 Like

Many of the Yellow-rumped and Orange-crowned Warblers seem to have already departed for points north or up. (Many Yellow-rumps high in the Cascades, Orange-crowneds as far north as the Brooks Range in Alaska.)

The next wave has arrived, Here is one of the mid-spring migrants bathing in Butyl Creek, a Western Tanager.  Tanagers may not be going all that far as long as the place they’re going has tall conifers.

My camera didn’t know whether to focus on this Western Tanager or the Fringe-cup flowers that are native here.  Among the birds that should be arriving soon are the Swainson’s Thrush and finally Cedar Waxwing.  Perhaps the last migrant to arrive is the Common Nighthawk, which is sadly now rare or extirpated throughout the urban zone of Western Washington.

In today’s wave of migrants we had this member of the Tyrant Flycatcher family, which we decided was a Dusky Flycatcher. Notice the short wing- that is short “primary projection” and the very long tail.  Dusky Flycatchers are headed for the Yellow-pine zone (Ponderosa) and so most migrate up the eastern side of the Cascades and are not at all common on the west side.

This shot shows a faint vest and slight amount of yellow which is one reason we thought it wasn’t a Gray Flycatcher, which is even rarer on the West-side as Grays are heading for the sage-brush.

Down at Midway Beach we had another Tyrant, this an Olive-sided Flycatcher, another mid-spring migrant.  This bird may not be colorful, but it is delightful on all counts.  It hunts from a very tall perch and using its long wings, ‘becomes’ a Swallow as it chases down large flying insects, then goes back to sitting and uttering its cheerful song. Olive-sided Flycatchers are having conservation difficulties and have declined in Seattle and Beacon Hill. Cheasty is a stronghold for them and I believe one has been reported from Cheasty this spring. They especially like the dead Cedar snags in the golf course right across from the Parks Dept. materials depot, or transfer station, or whatever we call that.

Here’s another shot of that showing its crest. One of the identifying marks of an Olive-sided is its V-shaped powerful looking build.

Some species of Tyrants have very large heads compared to their body size. Sometimes artists won’t paint the heads as big as they are for fear the painting will look wrong. This is the Olive-sided again.

Northbound migrating Cedar Waxwings have not yet arrived on Beacon Hill yet this year. This shot is from 2018, Stillwater. They are among the last of the spring migrants, and I have not heard of any reports yet. However, some flocks of Waxwing will attempt to delay the southward migration in the fall and end up staying part of the winter here in the northland if they find a good food source. I was happy to find 34 Cedar Waxwings in the original Costco Parking lot one day in early February of this year and another flock lingered in Jefferson Park I think until March.

Red-winged Blackbird at the marsh at Midway Beach. We took off our shoes and tried to wade out into it but it got too deep. Red-wings are wetland obligates and so are very rare on Beacon Hill. We had our second this year in March. She tried some suet and then skedaddled.

Now I’m probably making up a story with no basis in reality, but the yellower bird above looks like the bird that was hanging out a couple of three blocks to the south at Ellen and Chak’s that Chak got a picture of. Today (May 11) the older bird came up in the morning and showed the younger bird the creek and then split. Later they both came back and bathed.

There is absolutely no reason for this photo to be so bad. This kindly female MacGillivray’s Warbler came and bathed three times today beginning at noon, but she was a bit skittish and didn’t ever linger too long, and I wasn’t able to get a decent shot so I’ll put up the shot I have.

This Bald Eagle was eating a duck right in the town of Tokeland on May 8. It’s a young bird with no white yet.

There were shorebirds at Bottle Beach, with Red Knot being the most numerous.

Here the shorebirds are lined up according to how deep they like the water.  Mostly Black-bellied Plovers in the deep water, mostly Short-billed Dowitchers and Dunlins in the shallows.