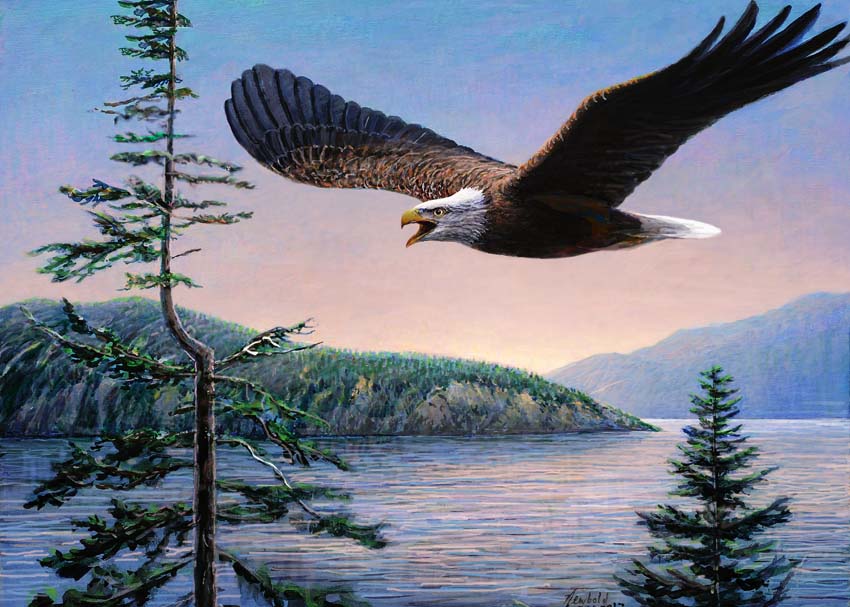 Posted at 22:58h in On the Easel by EdNewbold 0 Comments
0 Likes

“…instantly paint what you see. When you’ve got it, you’ve got it. When you don’t, start over…” is a quote from Manet that appears in my book.

I however am at the far-other-end of the art world when it comes to the subject of continuing to work on old paintings in which the artist doesn’t feel they have instantly “got it.”

I don’t care if the image is 20 years old, I’m happy to keep working on it and I think I’ve achieved some reasonable successes with my “Never-stop-working” approach.

One painting that I didn’t like when I first finished is a painting that I call Bald Eagle flying to distinguish it from my other Bald Eagle paintings.  But since it’s initial publication I haven’t done any major surgery or big changes, just try to refine the technical work, and I suddenly think it’s a decent painting.  So much so that I am bringing it out soon as a Notecard.

Another painting, this one from the last century, that I recently reworked is Rainier in Autumn, which shows another flying bird, a Clark’s Nutcracker, in front of a backdrop of Paradise and Rainier in high fall foliage.  I fixed a lot of small things that have been bothering me for the last 20 years, but nothing that would stand out so in a casual glance you might think it’s the exact same painting.

Here is my so-called self-hyped “masterpiece.”  (I can be a failure at self-promotion sometimes).  It’s no further along than last blog.  I set it aside while I reworked my existing best-selling image “Seattle from the Bay,” which is now available in the huge size of XL 12 x 36 at the low, low price of $31.79 at the store.  It is already selling well, and I’m promising to work more on Caspian Tern, which is intended to be my ultimate lifetime masterpiece.

This is Seattle from the Bay XL, now at the store. Caspian is intended to counter Bay with a completely different color balance and the suggestion of summer rather than other seasons. But I worry the composition of Caspian lacks dynamism.

Here is a new start, “Gadwalls,” which is inspired by the fact that every now and then when I’m out in the field a Gadwall will strike a revealing (of it’s wing) pose and I realize this is not just some gray ordinary duck swimming around out there but a strikingly beautiful example of the Creation/Biodiversity of this world.

Another bird that fits the same prose is the Red-shouldered Hawk, and this painting which I already put up on the last Easel blog, also gives me a chance to celebrate the Nisqually Refuge, where this particular hawk has resided this winter.  It’s moving along slowly.

Red-crowned Parrots, this painting of an endangered species of birds of the Rio Grande valley in Texas, has been on previous Easel blogs.  I am finding it slow-going to finish this but I am not discouraged and I still like the painting and hope to publish it.