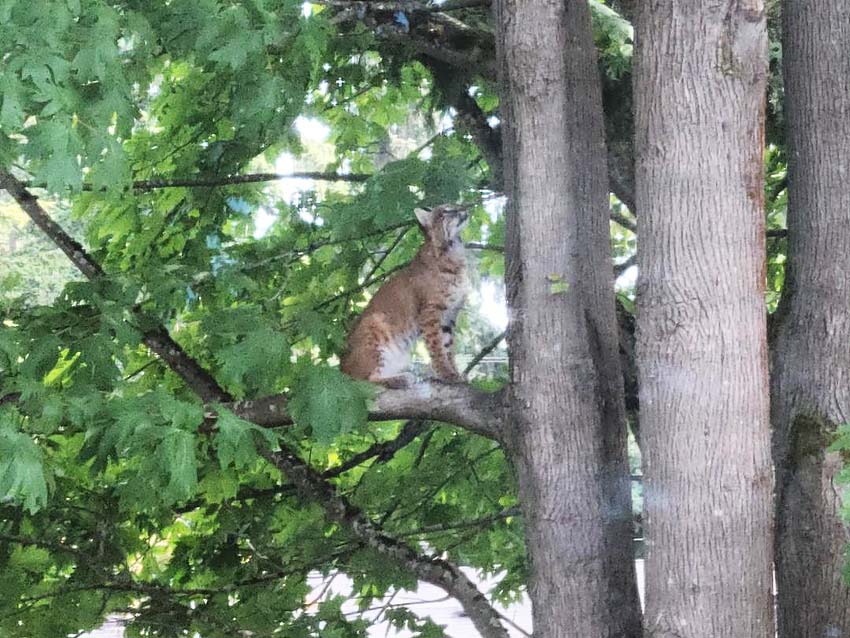 Posted at 02:52h in sightings by EdNewbold 0 Comments
0 Likes

Our friend Kathi in Bellevue sent us a shot she took from her kitchen window.  I allowed as it was pretty good, which would be true even if I myself had ever even gotten a shot of a Bobcat in the wild, was never quick enough.  It’s kind of unusual to get Bobcats in trees, they go up there but they aren’t like Pine Martens that can practically live in the trees.  I like the pelage on this cat, what with the bold black markings on the legs. I said I thought it was a female or grown adolescent based on it’s size and proportions but if there is an expert anywhere I’d be interested to know if that’s likely or just me blowing smoke.

It reminded me of another shot that crossed my desk somehow and I may have forgotten the guy who took it but his name is Anderson and it is from Bellevue also.  That’s an Eastern Gray Squirrel dangling from its mouth, so this shot gives a clue as to the dietary preferences, but one thing’s for sure and we all should remember: Bobcats love Rats.

My friend Will Werley from Frederick, Maryland sent me a print of a shot he took of this bird, and he wondered if it was a Cowbird.  Will, that is not a Cowbird!  That bird is royalty, a Rose-breasted Grosbeak. And although Will is no birder, his shot is way better than I could manage on our Great Midwest Warbler Safari from 2014. We saw this bird at many of our stops, but I don’t have any photos this good from that trip or anywhere else. (They show up now and then in Washington.)

Speaking of good photos, here are two stunningly good shots by our birder friends Charlotte and Bill Byers, who were on our Smith Island trip in July.   This shot is a Tufted Puffin by Charlotte and it is the best shot I’ve ever seen of one.

And this is by Bill, a Horned Puffin in flight. Flight shots can be difficult, and what a stunner this is

And this is by Bill also, the same bird.

So I’m happy this blog has none of my photos, just some spectacular ones by friends! Long live friendhip!

comments closed, happy to have feedback at ednewbold1@yahoo.com.