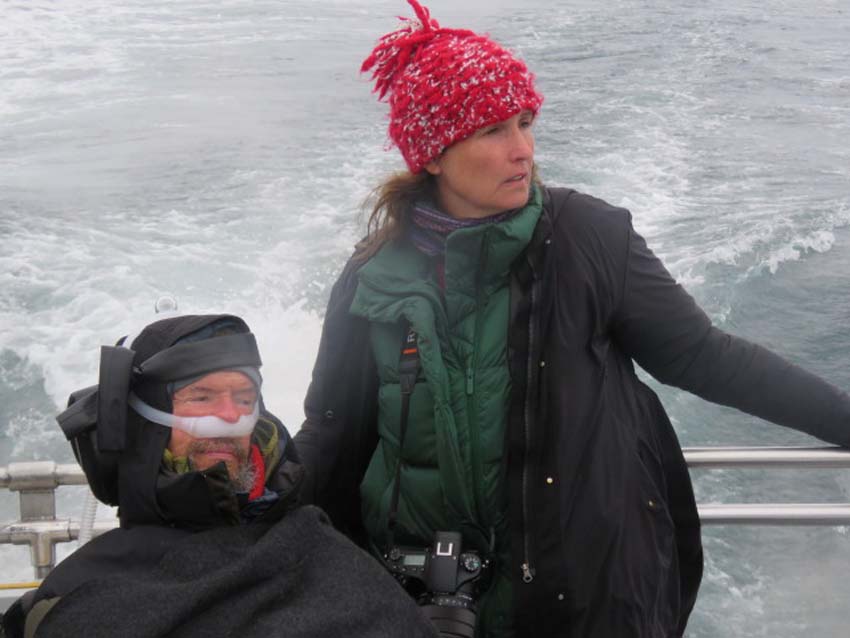 I’m running an ad in the Seattle Times Sunday edition January 8, 2023 in an effort to bring attention to the stunning accomplishment of Brian Pendleton and Darchelle Worley in observing 376 species of birds in Washington state in 2022.  Darchelle is relatively new to serious birding; Brian is in his tenth year with ALS.

Here is the ad:

This was teamwork all the way

The logistical challenges were immense. Brian used to be an athlete and has run 230 Marathons in his life including the Boston Marathon many times. But now he has difficulty moving his head and merely seeing a bird is a challenge. Getting Brian positioned so he can look through a scope can quite an effort. Here MerryLynn Denny assists Darchelle in helping Brian see a White-faced Ibis at the Walla Walla River delta.. However, hearing is at least as important as seeing in Birding and thankfully, Brian’s hearing remains acute. The ability to hear a rare chip note or song and realize it is something different while immersed in a chorus of bird noises is one thing that marks great birders and Brian has been talented in this regard since he began birding at a young age. His visual ability can also seem uncanny. It’s not unusual even in his current state of limited visual range for Brian to be first to spot and identify a bird, and it’s quite common for Brian who cannot use binoculars to be telling 2 or 3 birders with binoculars where a bird is.

This is one of the birds, a Great Gray Owl, that we were lucky to see with Brian and Darchelle. On the same trip we saw a lone Gray Wolf sprinting down a mountain slope and a Dusky Grouse in full courtship display, no females weren’t evident but perhaps one was watching from a safe distance..

Throughout the year, there were problems with the Paparazzi

And plans would change at a moment’s notice

On our biggest ride with Brian and Darchelle we had finished birding the Potholes area and were headed for Ellensburg and then the Eastern Slope when news came in that Matt Yawney had found a Hudsonian Godwit at Gloyd Seeps earlier that day. Darchelle threw the car into a four-wheel drift, executed a 180, and we were headed to Othello for the night. We found the Hudsonian the next day, Darchelle has massively better photos than I do of this magnificent shorebird. The big Godwits and Curlews are the royalty of shorebirds, all shorebirds are in trouble and look at the bill on this bird. If my photo was better you could see it was red.

By no means were all of the birds difficult…

Many birds are a joy to see and not all that hard to find. Seattleites mostly have to cross a mountain pass and find a cattail-edged lake but if they do they are almost certain to run across a Yellow-headed Blackbird, one of many delightful Washington state birds.

Kind people helped at every turn…

I became terrified at the thought of listing the names of many of the kind people who helped Brian and Darchelle when help was needed. There is no way I won’t slight many people by not including them. The picture above is at the site of one of Brian and Darchelle’s more difficult birds. A Stilt Sandpiper finally got on their list as it foraged for a couple of days at the 203rd St. Marsh in the Kent Valley. Here Raphael Fennimore of KingCo BigYear reknown himself, poses with Delia and Brian. The bird refused to join the photo. I had trouble telling whether it was a duck, it was so far away in such low light, but the identity was resolved fully. But so many folks helped Brian and Darchelle and perhaps the most helpful were the ones who were the closest on the list, including Maxine Reid, who ended with 371 birds and Liam Hutchinson, who ended the year at 361 birds. Liam’s accomplishment was startling as he was dealing with a different “impediment,” he was 15 years old and worked closely with his mom Elizabeth, who not only is a very good birder but even has a driver’s license.

“BigYearing”: not quite the same thing as “Birding.”

Bigyearing is birding but it is not normal birding, it’s a bit distinct and it is not for everyone. Many see the BigYear tradition going back to the 1950s when then-famous Bird artist and Guide-book author Roger Tory Peterson took about 3 months to take a drive across the country and show James Fisher a thing or two. Who was James Fisher? He was England’s Roger Tory Peterson, and quite well-known on that bird-loving island. Birding in England is fantastic, but the US is bigger and hosts a lot more varied habitats, and both James Fisher and Roger were blown away by all they saw on their trip so they decided to write a book about it. Wild America, was the result and many a gray-haired birder today will attest to reading it as a youngster back in the 60s. (This includes me, and I know for sure also Andy Stepniewski, one of Yakima’s leading bird experts, except he doesn’t have gray hair). The book may have planted the seed for the BigYear. Then in the ’60s Ken Kauffman wrote the book “Kingbird Highway,” which told the story of a BigYear he did on a shoestring budget, and some will forever associate going hungry and eating canned catfood with BigYearing, thanks Ken! Finally Steve Martin and others made the movie “Bigyear,” flawed by its lack of any scenes of birdwatching, but by many accounts an enjoyable watch, and with that the launching of the sport of BigYearing was accomplished. Here in Washington, Marv Breece, was it in the 90’s? crossed the finish line with 359 species seen in a year and believe it or not kids, that was before e-bird.. Photo of Roger Tory Peterson, left and Ken Fisher courtesy of Wikipedia.

On the birding chatline Tweeters, readers have expressed concern over the carbon footprint of Birding. BigYearing takes that up a notch, so it’s worth thinking about this issue. Here is my take on the problem, which, if the link doesn’t work, is right here on this website under “A different take on Birding’s Carbon Conundrum.”

There were some nice places visited

At Big Four where there were American Redstarts amidts the stunning mountain/wetland views.

The Ferruginous Hawk is a bird that is not too easy in the state. It’s our largest hawk, a bird of treeless areas on the Great Plains. I took this terrible shot, Darchelle and Brian have much better shots of this bird on it’s huge nest in Eastern Washing.

Luck was intimately involved. A good pelagic trip was the break they needed

About 20 birds that are normally seen in Washington state–out to the 200 miles at sea–are generally only viewable once you get 5 to 10 miles out into the ocean. But Brian can’t go on a normally scheduled pelagic boat trip and Brian and Darchelle have to organize their own with Westport Seabirds and Captain Phil Anderson and Firstmate Chris Anderson. In 2021 Brian and Darchelle’s trip was bedeviled by fog and perhaps underperformed expectations. In 2022 The boat encountered bow-riding Dall Porpoise and Northern Fur Seals porpoising away from us. But these don’t count, they aren’t birds and if anything the trip saw fewer Mammals than normal. But what did show up were South Polar Skua, Pomarine Jaeger, Parasitic Jaeger (formerly referred to in the Northwest as a “Seahawk.”), Long-tailed Jaeger, Cassin’s Auklet, Red Phalarope, Laysan Albatross, Black-footed Albatross, Northern Fulmar, Sabine’s Gull, Tufted Puffin, Fork-tailed Storm Petrel, Sooty Shearwater, Flesh-footed Shearwater, Short-tailed Shearwater, Pink-footed Shearwater and Buller’s Shearwater (these hail from New Zealand.). To say it was a good trip was understating it. Luck factored a bit again when they saw an odd bird from a ferry and Brian suggested in an urgent tone that Darchelle should get a shot of it. When they got home they confirmed that Darchelle had gotten a shot of a very rare Manx Shearwater, which despite its name lives here as well as the Isle of Man.

One that got away. You can only count a bird in Washington state if it comes to Washington state. Mountain Plover was a miss this year. This is a bird from Griffeths Priday Park that Brian, Darchelle, Delia and I saw in 2021 (originally found by another birder.) But in 2022, no Mountain Plovers came to visit, or if they did, the birders missed them. The Mountain Plover is a declining species, it associated with the enormous Buffalo herds that once roamed the Great Plains, raising its young in the newly “fertilized” ground that the Buffalos had trampled. Now without the herds, it’s hanging on for dear life in North America. But Washington was never its first choice in a place to spend the winter and it’s impossible to know if its absence involves decline or random chance. The fact that each year is unique in how many birds can be seen during the year makes comparing year to year Bigyears and drawing conclusions about Bigyear “talent” problematical.

Brian at Ellen and Andy Stepniewsky’s house in 2020.

Darchelle at the side of the road in Eastern Washington as a Long-billed Curlew was being located.