Shots that got away during the winter that wasn’t
8299
post-template-default,single,single-post,postid-8299,single-format-standard,theme-bridge,bridge-core-2.7.4,woocommerce-no-js,qode-page-transition-enabled,ajax_updown_fade,page_not_loaded,boxed,,side_area_uncovered_from_content,overlapping_content,columns-4,qode-child-theme-ver-1.0.0,qode-theme-ver-26.3,qode-theme-bridge,wpb-js-composer js-comp-ver-6.6.0,vc_responsive,elementor-default,elementor-kit-12768

Shots that got away during the winter that wasn’t 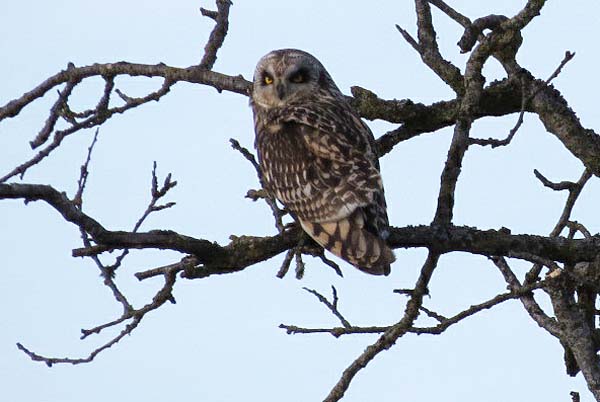 Posted at 00:23h in sightings by EdNewbold 0 Comments
0 Likes

Delia and I went down to the bootheel of New Mexico again over the holidays.  We had a dust-storm in Wilcox, Arizona on Christmas day, then a snowstom Christmas night and another snowstorm on New Years Day.

I got a new camera, just a point-and-shoot but it has a mega-zoom and doesn’t look like an artillery piece or cost too much, a Cannon Powershot.

If you get one, don’t use the Cannon photograph software.  I lost all the snowstorm and duststorm shots –which I really liked–of course–somewhere in my computer.   Now  I load through my old software.  I’m a slow-learner, but this camera is beginning to impress me. (Thanks George and Mary Anne!)

(Another tip I got from G & MA:  go on the internet and use Duolingo to learn Spanish or whatever language you are trying to learn–It’s amazing!). 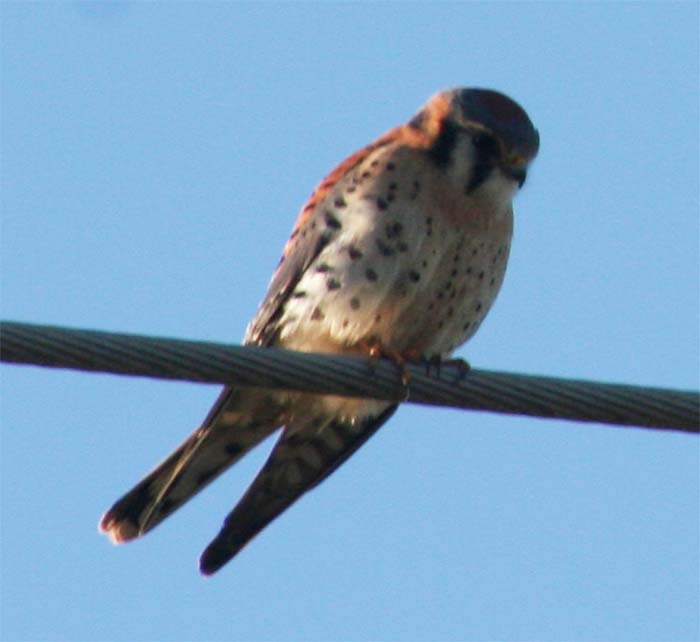 We got this shot of a Kestrel late last year.  Maybe National Enquirer should run an “Ugly Kestrel” contest but they’d never get any entries.

We went up to Stanwood to see the Owls which are getting harassed  pretty hard by people wanting a piece of them, photographically speaking.  Apparently these birds are getting flushed, and repeatedly.  I hear the Dept of Fish & Wildlife will get a sign up there and is encouraging polite citizen enforcement.  This is a historial roost site for both species of Owl, Long-eared and Short-eared, and it would be a terrible shame to lose it so unnecessarily.

We stayed on the road and shot these shots, this is a Short-eared Owl. 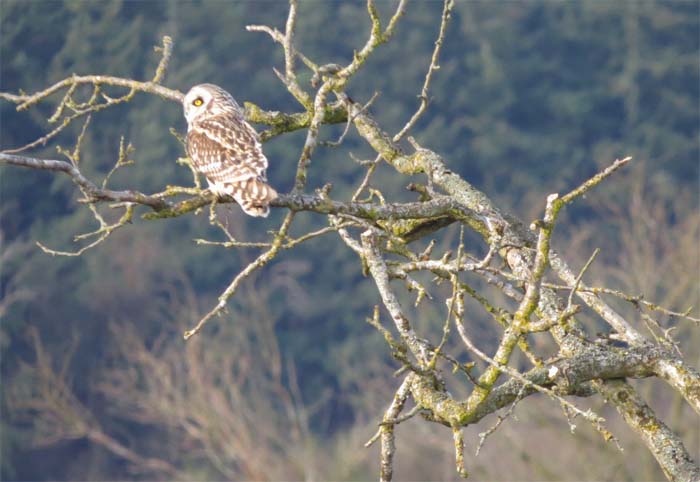 Maybe the same bird, but there were quite a few Short-eared. 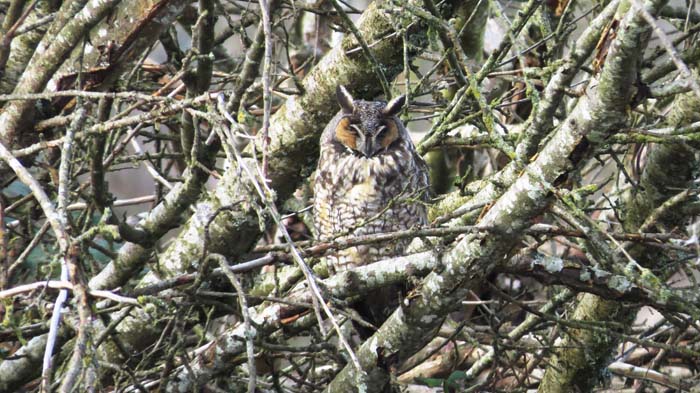 This is the harder-to-see Long-eared Owl, shot from the road.   Hope it’s doing ok. 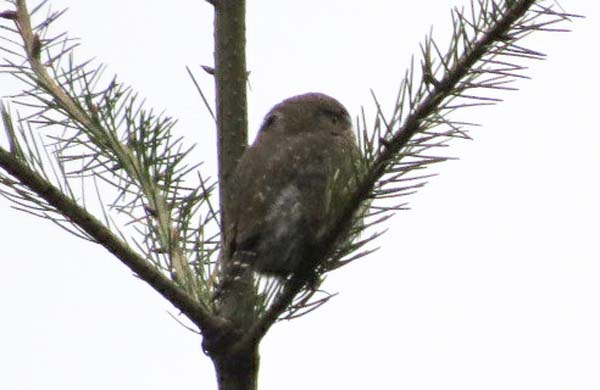 Sorry for the photo-quality, this was a  Northern Pygmy Owl late in the day in Carnation, another staked-out bird. 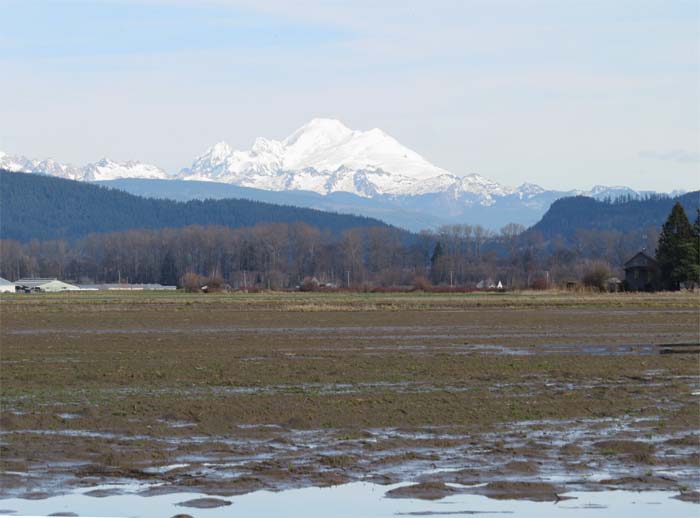 Mt. Baker reminded me of my new painting (see Sightings, this website) from the  Hayton access of the Skagit Wildlife Area.

I was envious of these Lesser Scaup that were swimming in Spencer Island, at least that way they could beat the heat of a January afternoon in the Northwest.   I wonder what summer will be like. 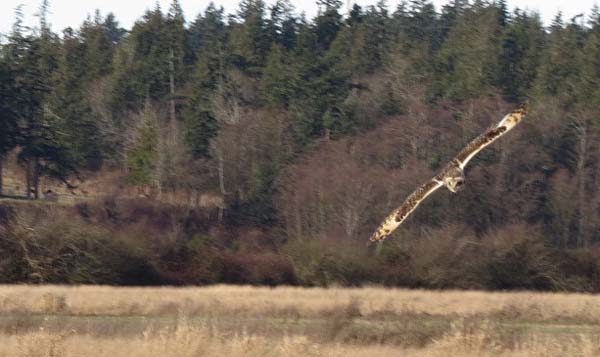 The Short-eared Owls and Northern Harriers put on a great flight show, here a Short-eared may have just heard a vole. 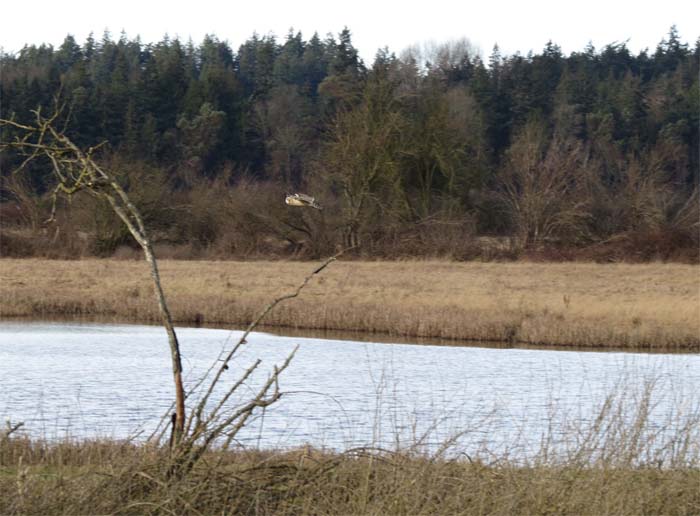 Flying Owls are delightful.  We’ve also been up to see the Barn Owls at Magnuson, who are raising kids.  Barn Owls, unlike any other birds in Washington, don’t care what the calendar says.  If there is food, they’ll start a family in December. 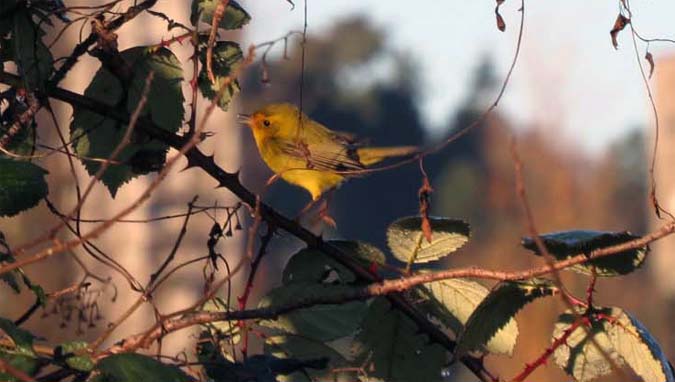 This Wilson’s Warbler was at the Union Bay Natural Area by the UW in January.   Quite unusual in winter (Brave New World?), and a great bird to have nesting in summer, as it did in Cheasty Greenbelt last spring/summer.

(Sorry for this but the comments are turned off because of spam.  I’ll be happy to turn your comment on, email me at ednewbold1@yahoo.com)