Something new under the sun
276
post-template-default,single,single-post,postid-276,single-format-standard,theme-bridge,bridge-core-2.7.4,woocommerce-no-js,qode-page-transition-enabled,ajax_updown_fade,page_not_loaded,boxed,,side_area_uncovered_from_content,overlapping_content,columns-4,qode-child-theme-ver-1.0.0,qode-theme-ver-26.3,qode-theme-bridge,wpb-js-composer js-comp-ver-6.6.0,vc_responsive,elementor-default,elementor-kit-12768

Something new under the sun

14 Jan Something new under the sun

There are many traditions associated with winter weather, Christmas  and the winter holiday season.  Riding in a one-horse open sleigh is an old one.  There is a completely new one here in Seattle and the Northwest.

Of course, it’s a keeping the hummingbird feeders full and making sure they are equipped with warming devices. 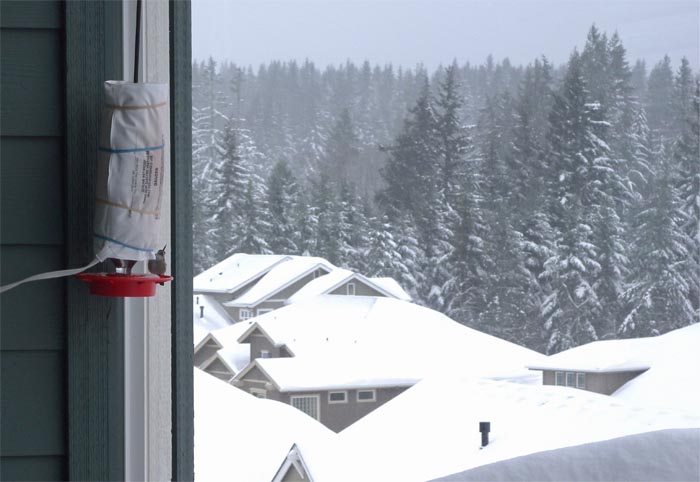 Joyce Meyer of Redmond innovated this simple and effective way of keeping her Hummingbird feeder from freezing. Rubber bands hold on a $10 heating pad. The feeder is about as tall as the pad. Note the Anna's Hummer on the feeder.

People in and around Seattle love their newly arrived co-resident Hummingbirds. And naturally, they worry for the tiny little things when the weather gets bad.  They come up with ingenious methods for keeping the Hummingbird feeder from freezing,  (see photo) or if they are caught by surprise,  stay at home through the storm reheating the sugar water at regular intervals. 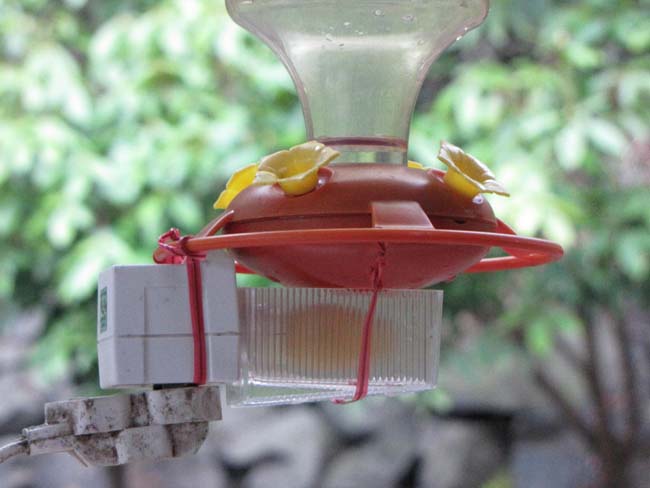 John Pollack of NE Seattle used a night light with a night-sensor, replacing the bulb with a red one, all for less than $2. This feeder attracted birds before dawn.

All this is new.  The Anna’s Hummingbird has been expanding its range northward since at least the 1970s and is now relatively abundant in Seattle and the urbanized Puget Sound lowlands.  It is moving north currently past Vancouver, Canada  into Southeast  Alaska and despite the fact that this is the temperate zone here with occasional tough winter storms, this is one hummingbird that doesn’t migrate.

It’s not truly known how dependent Anna’s are on hummingbird feeders, as they obviously expanded into the region prior to the advent of winter hummingbird feeding.  However, individual birds will go to great lengths to guard “their” feeder and visit feeders at very  frequent intervals in the winter.

Anna’s Hummingbirds are dimorphic in plumage.  The male sports a gorget and forehead and even sides of the head that are iridescent magenta.  The body is green on the back and lighter gray on the front.  The female has a small magenta throat patch bordered in black and gray.   They are larger than the Rufous Hummingbird which is the traditional hummingbird of western Washington.  Rufous Hummingbirds migrate long distances in the winter (for a hummer) to southern Mexico.  They are a warmer colored bird with the male being mostly copper-colored with an orange-red gorget.

Ed’s new painting, shown at the top of this post, celebrates the new reality of winter hummingbirds in Seattle.  A male Anna’s Hummingbird sits on a Birch tree branch with an Italian plum tree in the background.  Everything is covered in a new falling wet snow, even some of the still-hanging birch leaves.