Sometimes a 16-year break is good for attitude
8268
post-template-default,single,single-post,postid-8268,single-format-standard,theme-bridge,bridge-core-3.0.1,woocommerce-no-js,qode-page-transition-enabled,ajax_updown_fade,page_not_loaded,boxed,,side_area_uncovered_from_content,overlapping_content,columns-4,qode-child-theme-ver-1.0.0,qode-theme-ver-28.8,qode-theme-bridge,wpb-js-composer js-comp-ver-6.9.0,vc_responsive,elementor-default,elementor-kit-12768

Sometimes a 16-year break is good for attitude

18 Apr Sometimes a 16-year break is good for attitude

Posted at 04:57h in On the Easel by EdNewbold 0 Comments
0 Likes

In 1998 I started the painting Birds of Beacon Hill.  Thankfully, I started it on canvas.  I got really excited about it for a while, but as often happens, I ran out of steam and into severe technical difficulties.  I was also mentally troubled by the economics of this particular project:  How could I ever afford to offset litho (minimum quantity 1000) a poster with such a small potential customer base?

The passage of 16 years, however, can make a difference sometimes.  First, with the Cheasty  thing going (see News this website) someone actually remembered it and asked about it!   Secondly, I became thrilled at the possibility of going after the technical problems one more time.  And thirdly, the economics have all changed in the past 16 years, and I thought of something.

The something is I could offset-litho it at 14 x 18 as Birds of Seattle’s upland neighborhoods.  Not only that, with the advances in digital, I no longer have to think only about offset-litho.  I can issue it in a small digital run as it was originally intended:  Birds of Beacon Hill.

This is what it looks like right now, I’ve been reworking  it for about three weeks so far.  Still need both Jays and both Accipiters. 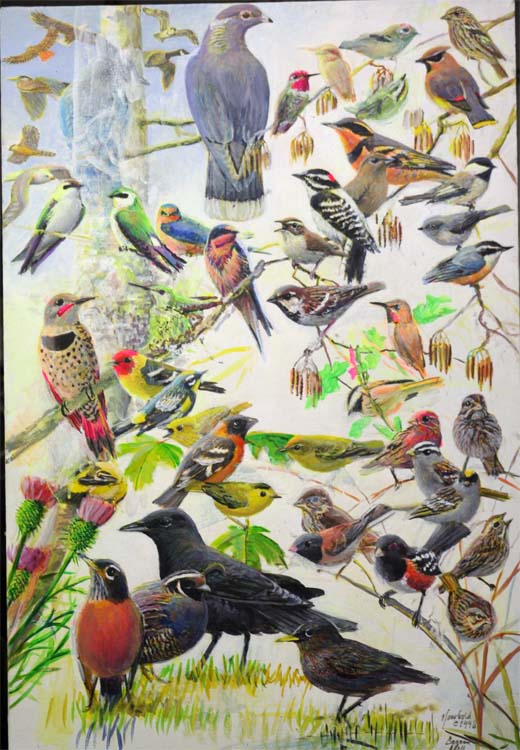 I’m at a finish point on King Salmon at Pillar Point.  It’s at the store and by next week will be available in Clallam Bay (!) at Compass Rose, a store owned by Bob Wall, who suggested it.  Pillar Point is a famous landmark for anyone who fishes out of Clallam Bay. 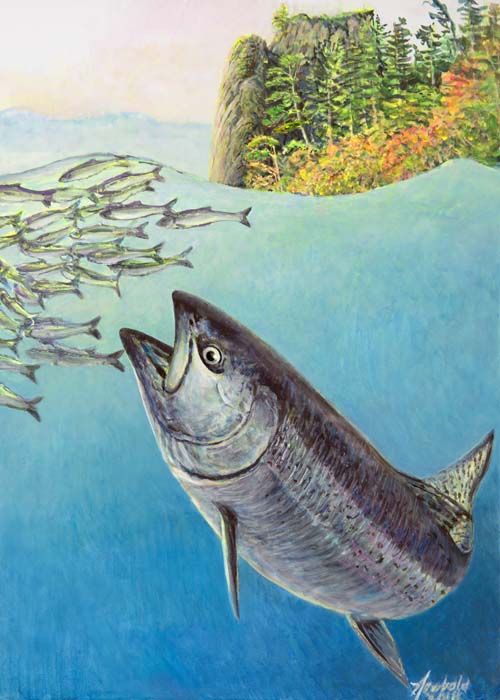 I’m also nearing some kind of finish line (I never really finish anything!)  on Bottle Beach.  Here’s what that’s looking like.  It’s too bad it won’t be at the Shorebird Festival.   My touring days are over.  I officially became too old on my last birthday.  I might put the original in the store. 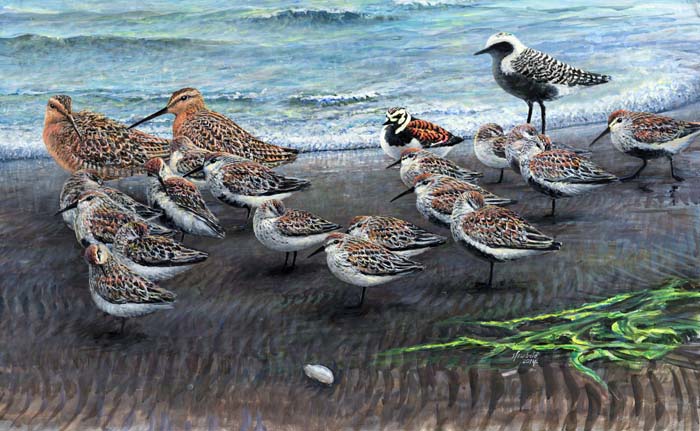