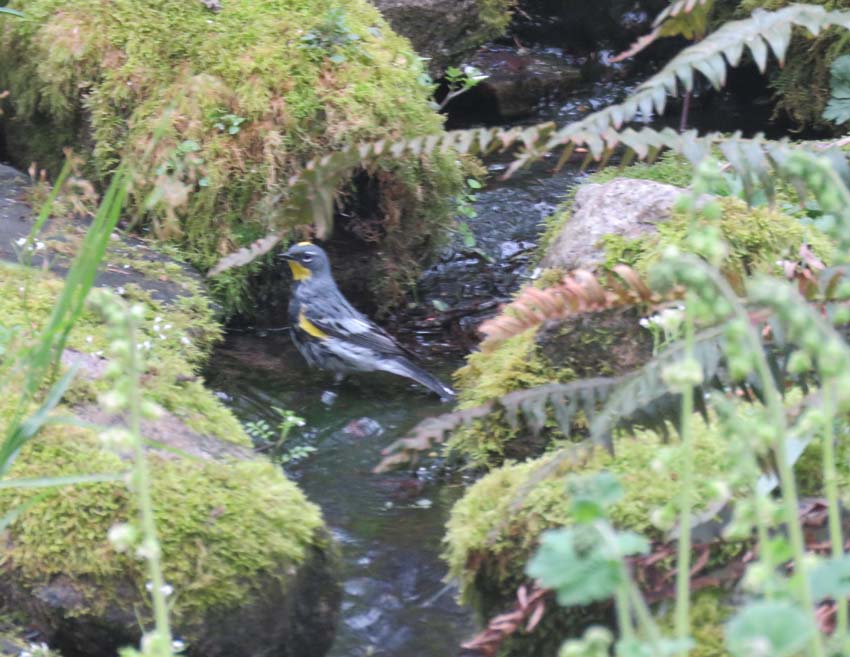 Posted at 03:13h in sightings by EdNewbold 0 Comments
0 Likes

Here is a male Yellow-rumped Warbler in Butyl Creek, April 11, 2020

This Wilson’s Warbler, bathing on the Creek on April 27th, illustrates a pet peeve of wildlife artists. If you painted this bird in the pose shown, everybody, including me, would say “That’s not a natural position the bird would get into..”

The migration is underway, here’s hoping birds will come and stay. (It rhymed). This is an Orange-crowned Warbler bathing in Butyl Creek, our backyard recirculating creek, on the evening of April 10. The best ones, though, are the ones that got away. Earlier in the day an immaculate Common Yellowthroat (Black mask and bright yellow throat, a very timely bird) took a bath, but got in and got out too quick for even my trigger finger.

Here’s another Yellow-rumped Warbler that bathed on the 15th of April.

This MacGillivray’s Warbler was First-of-Year today April 25 and so was a Wilson’s Warbler FOY today, but no shot of that.

On April 26 Nashville Warblers showed up early and at 5:30 we were treated to what may have been a pair bathing together.

They have a red crown that shows when they really get a bath but this was a bit hurried.

Delia thinks that no Warbler enjoys bathing more than an Orange-crowned. They get a slightly crazed look and resemble a bag of feathers when they are done.

This Trillium was blooming at Cheasty.

This Spotted Towhee male was at Cheasty on April 15th. We named him Dan, so we could call him “Handsome Dan.”

This Common Raven was soaring and being mobbed by Crows over Cheasty on April 15, 2020. Notice the immense relative size of a Common Raven. 2020 is a banner year for Ravens as the they tighten the noose on Crows in Seattle. Ravens have been challenging the urban “Raven-free” zone around Seattle for years, moving north from Joint Base, east from the Snoqualmie Valley and South and east from Snohomish County and Kitsap. The jig is up for Crows who would love to have the urban area for themselves. The Raven insurgency hints of possible Raven hegemony in a future maybe not that distant. For people, it may ultimately prove challenging to live with a Corvid that big, but they still have to prove able to make it in the pure residential urban zone. To see what it’s like to have a very large Corvid living in an urban area, I suppose we should travel to Singapore or Kuala Lumpur. I’m not sure if the Jungle Crow is bigger or smaller than a Raven, maybe I’ll look that up.

This Cooper’s Hawk was at Mercer Slough in Bellevue on April 8. 2020. It amazes me how much this species seems to vary, individual to individual. It’s not unusual to have Cooper’s Hawks appear to have a slight crest, which can give them rakish good looks. Her back appears darker than I would expect, although it is evening light.

Since it’s covid time, I thought I’d bring out my old pictures from the Peruvian Amazon. No, wait, that’s our backyard with a Downy Woodpecker, taken yesterday!

Somewhere on the internet there is a video of an English Rabbit herding sheep in a barnyard. We had no sheep for this cute little bunny to herd but he did chase away an Eastern Gray Squirrel.

This poor photo is of a Lincoln’s Sparrow, a small relatively-rare-on-Beacon Hill sparrow of mountain thickets that is migrating and came through on April 29 2020.. They are strikingly beautiful in a subtle way.

Nashville Warblers were here again on the 29th of April. This is a male getting down to business.