State looking at new methods for traffic enforcement (plus other photos)
12218
post-template-default,single,single-post,postid-12218,single-format-standard,theme-bridge,bridge-core-3.0.1,woocommerce-no-js,qode-page-transition-enabled,ajax_updown_fade,page_not_loaded,boxed,,side_area_uncovered_from_content,overlapping_content,columns-4,qode-child-theme-ver-1.0.0,qode-theme-ver-28.8,qode-theme-bridge,wpb-js-composer js-comp-ver-6.9.0,vc_responsive,elementor-default,elementor-kit-12768

State looking at new methods for traffic enforcement (plus other photos) 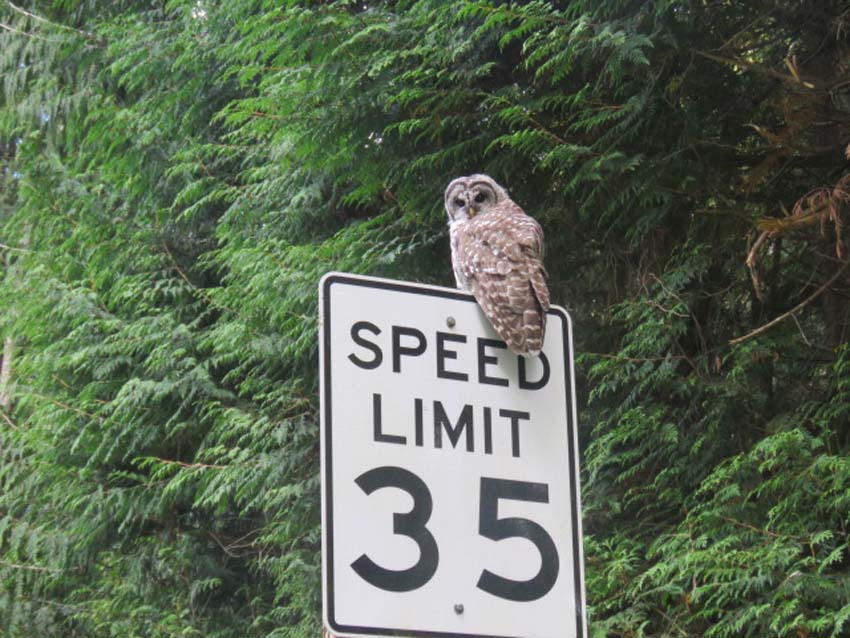 Posted at 19:26h in sightings by EdNewbold 0 Comments
0 Likes

Anyone caught speeding is subject to having their cap snatched. This Barred Owl was on a Speed Limit sign near Hansville, WA in September. Barred Owls have been involved in many incidents of cap-stealing but I’m not sure if there was any official arrangement between WSDOT and this particular Owl.

Also at Hansville was this Caspian Tern. I have been telling everyone who will listen that we in the Puget Sound area are lucky to have one of the most spectacular critters on the planet (Well, there are thousands of others in this category, I realize). This bird that is often taken for a Gull is amazingly athletic and has recently been reported giving Seahawks the what for. (Seahawks are Parasitic Jaegers. There is proof and it’s in my possession. More on that somewhere on this website).

Speaking of the Sea, Delia and I and went on a Pelagic trip out of Westport WA on August 23 along with Brian Pendleton. It was fairly rough with a lot of sea-spray and I was doing my best to add food items for the various creatures in the Ocean but I did manage to get off a few shots, including this of a Black-footed Albatross.

Andy and Ellen Stepniewski were on the boat also, Ellen here. She has a big smile on her face now but not the whole way. Of all the people on the boat, I think Ellen and I had the biggest problem with the fact that the substrate for walking around on was not firm and stable, as it is here on land except during Earthquakes.

Before the trip Brian and Delia and I had gone up to Griffeths-Pridday State Park to look for a Buff-breasted Sandpiper and a very rare Asian Stint or at least a Baird’s Sandpiper. Here Delia is attempting to see anything through the very thick fog we encountered there.

We did manage to find a Baird’s Sandpiper. This bird is a long-distance flyer as are many shorebirds, especially so this species and to prove it the wingtips project way behind the tail (That’s wing not tail at the end of the bird.)

After the Pelagic trip we went down to check out Midway Beach and were delighted to find about 23 Snowy Plovers. Snowies and their relatives the Piping Plovers are embattled as they try to share sandy beach habitat with people.

Another occasion for such a dance was this actively-foraging Stilt Sandpiper that was at 3 Friends Fishing Park in Kent, WA a little earlier.

Many years ago I painted the Mukilteo lighthouse with an Osprey flying. I was taken with how beautiful it looked last time we crossed, and am thinking about trying it again. As before, the only critter that I can see working at all is an Osprey. (And, of course, there has to be a critter or I’m not painting.)

Red-shouldered Hawks aren’t easy to find in Western Washington. When you do find them they often go off and find another perch that’s more inaccessible. This very handsome young bird was reasonably cooperative for a half a minute at the Nisqually National Wildlife Refuge. I may even try a painting. As Nisqually Naturalist David True told us, you aren’t as likely to mistake them for a Red-tailed Hawk, which they are related to, as much as for a Cooper’s Hawk because of the way they fly, with stiff rapid wingbeats.

Meanwhile fall migration is up and running here on Beacon Hill, Seattle. We’ve had three Warbler species, Willow Flycatcher, Western Tanagers, Black-headed Grosbeaks and Swainson’s Thrush visit so far this fall. Here a Yellow Warbler is getting ready to take the plunge on the 14th of September.

Belly flop, dive, or cannonball? (There’s only three ways of going in.)

The calm before the bath.

Meanwhile all the activity has attracted the attention of other species of bird-watchers. This is a male (we think) Cooper’s Hawk that’s been around before (we think,) he’s almost as brightly colored as an Eastern Bluebird. My shot doesn’t do him justice and is through glass.

The great indomitable Brian Pendleton at Andy and Ellen’s house in Yakima, WA in August. We all went looking for a day for a Blue-gray Gnatcatcher at Simco and dipped and then went looking for a Black-backed Woodpecker in the pine-zone for a day and dipped but the consolation was a Northern Goshawk speeding down a Forest Service road ahead of us about one foot above the road-surface no doubt trying to surprise any Ground Squirrels using the road for sunbathing, which they do.