Surprise Kestrel welcomes us to the Canyon
16067
post-template-default,single,single-post,postid-16067,single-format-standard,theme-bridge,bridge-core-3.0.1,woocommerce-no-js,qode-page-transition-enabled,ajax_updown_fade,page_not_loaded,boxed,,side_area_uncovered_from_content,overlapping_content,columns-4,qode-child-theme-ver-1.0.0,qode-theme-ver-29.3,qode-theme-bridge,wpb-js-composer js-comp-ver-6.9.0,vc_responsive,elementor-default,elementor-kit-12768

Surprise Kestrel welcomes us to the Canyon 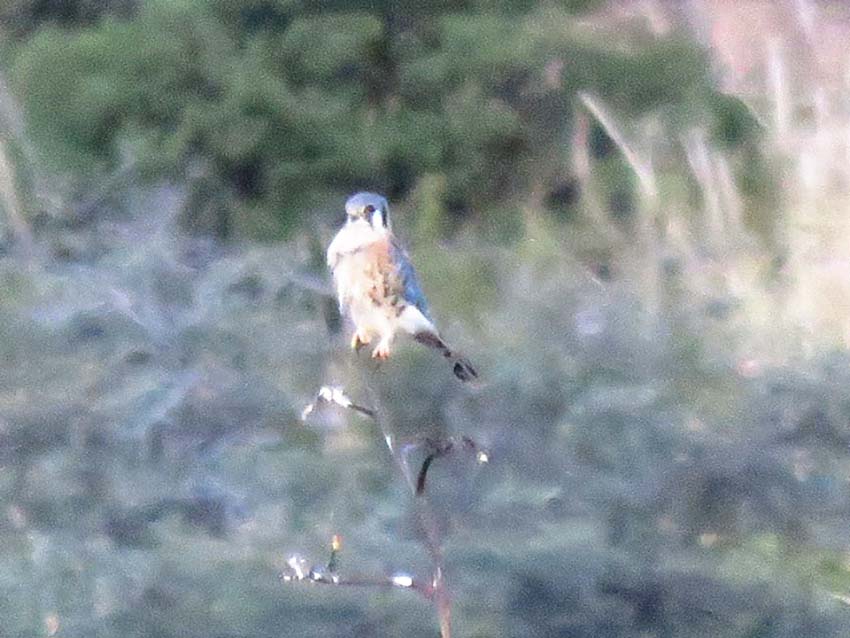 17 Dec Surprise Kestrel welcomes us to the Canyon

Posted at 04:07h in sightings by EdNewbold 0 Comments
0 Likes

We spent the first two weeks of December at my parents-in-laws place in the Bootheel of New Mexico. It takes two days to get there, and we arrived late the night of the 1st, but just before dusk. We suddenly heard a racket, repeated high-pitched “Killy-Killy-Killy-Killy” calls. It turned out to be an American Kestrel, careening around the airspace of the canyon before settling down on an Agave in the distance as shown.

This was a surprise. We’ve never known Kestrels to hang out in the Canyon. They used to sometimes winter on the high ridges and we would see them on the way over the Pass but there hasn’t been one there in decades. We love Kestrels and were delighted.

Kestrels are one of the birds I–and many people–worry about. They have declined by something like 50% in the last 30 years or so, with declines not being evenly distributed. They are completely gone from much of the East. They used to be common where I grew up in Pennsylvania but are extirpated from all or most of the state. now. A factor in their decline in the East according to the Ornithologist Dr. Richard Mellon is the regrowth of the forest in the East. Many prairie birds invaded the East when the forest was originally mowed down,and are leaving now that spare land is regenerating as forest.

But other factors are at play in other areas. I suspect that Crows and Cooper’s Hawks can be a factor, both of these species prospered during the last thirty or forty years in Kestrel areas, and the researchers, who haven’t figured out what the trouble is yet despite a lot of research, may not have wanted to look at those two agents. I remember witnessing 15 or 20 Crows systematically harassing a breeding adult Kestrel in the wilds of Central British Columbia. All the birds almost without exception hate Raptors in general and they get to take out this hatred on this second-smallest of American Raptors and one that is used to hunting from highly-visible perches.

We hiked up to the pass on the 5th and over the top to look at how the eastern slope of the Peloncillos were doing. The valley on the eatern side is much higher than the San Simon Valley which can be seen in this shot from near the pass looking toward the Chiricahua Mountains of Arizona.

We were lucky to get two modest rains while we were there.

We had to keep the doors locked as there was dangerous wildlife everywhere.

Western Bluebirds were on the land in force but we didn’t see a single Mountain Bluebird.

Here is the wildlife pond that my parents-in-law had constructed. We are so happy it is full. The rains started early and were mostly good this summer but the month of August was crazily spectacular with many places in the Rodeo, New Mexico area getting 12 inches in that month alone. By contrast, Seattle averages (should I say used to average) 6 inches in it’s wettest month, November. On the dam you can see something black and red, that’s a game camera that our friends John and Emily have put in that has taken shots of Bears, Cougars, Bobcats, Coatimundis, Gray Fox, Great Horned Owls and a Road-runner that got up close and personal to see what the heck was going on.

The Louisiana Water-thrush is a bird with a big personality. If you see this bird and it isn’t dancing, it is probably dead and taxidermied.

When it dances it often sticks its butt way up in the air and often shows off its very long pink legs. It has a loud chip and a loud song which is quite beautiful, but don’t ask me to pick the song out of a lineup, good birds can though. This bird is foraging for bugs out in the middle of the San Pedro River.

There are two species of Water-thrush in the US and this is the larger and more flamboyant one. A Northern Water-thrush winters now for 3 or 4 years in a row at the Skagit marsh at Conway, at Wiley Slough. That bird is also quite loud but it is pretty skittish and I’d put my shots of it up but you can barely tell it’s a bird in them, by contrast with this Louisiana which came up with many good poses and said cheese willingly.

During the first 35 years Delia and I went to the Bootheel, we saw very little of the “nearby” areas. We were always rushing to spend as much time as possible with Bob and Katie, and then CD Littlefield. Now that we have no one, we are sadder and lonelier but we are getting to see things we have hear about constantly from birders traveling the Southwest. On the way back to Tucson, we took in the Santa Cruz River valley, which sits just to the west of the Santa Rita Mountains, which are very high (9700′ plus or minus, Mt. Wrightson) that are shown here from the road somewhere near Amado.

Birders sometimes have the reverse-response from everyone else. The tourist bureau wants to tell you about the golf courses, the resorts and the eating establishments. Birders want to know where the sewage lagoon is. This shot from the Amado Waste Treatment Plant gives an example of how great they can be. The Black-bellied Whistling Duck is rare in Arizona, a Duck you can see in large numbers if you hit New Orleans for Mardi Gras. We also had both Scaup Ducks, two Black-crowned Night Herons, Pied-Billed Grebe, a Vermillion Flycatcher, and a Black Phoebe there.

Sorry no comments because of bots. Write me at ednewbold1@yahoo.com