The loneliness of the long-distance corona-slowing Market 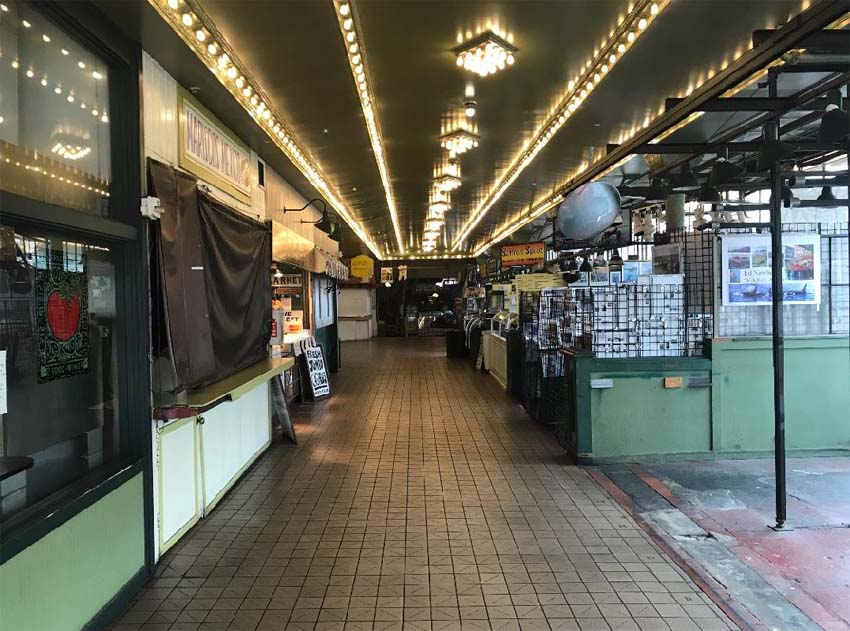 27 Mar The loneliness of the long-distance corona-slowing Market

Posted at 00:01h in sightings by EdNewbold 0 Comments
1 Like

The photo is a bit haunting and emotional for me.  It could never have been taken in 2019.  The Newsstand is gone. Right through to the last day that the Ed Newbold Wildlife Store was open this March, customers had come by and expressed dismay and sadness that the Newsstand was gone.

(Thanks to Paul Stricker for taking the shot.  He was there in full compliance with the spirit and letter of the current restrictions.)

But now, even the people are gone.  For years I have complained off and on that I was never free from the daily toil of running a store.  Even if sales were terrible, there was a list of stock, however short, that needed replacing as well as bills to pay and supplies to be ordered. It’s been terribly hard for me to close the store after 37 years of operation. I’ve struggled with understanding that the virus needs to be fought with somewhat draconian tactics and have relied upon and needed the explanation and education coming from my spouse, who is retired now but is a PhD Epidemiologist who did research with what is now Kaiser for 35 years and had an appointment at the UW.

But from this perspective I can try to see this as a happy picture. We will band together as a city and region and do the right thing.  Suffering lies ahead for many of us but perhaps it can be minimized and those who are struck by the disease perhaps can be given loving and adequate medical and emotional care. And apparently, in the 1918 Flu the cities that did the most to stop it recovered the quickest also.

(Speaking of the 1918 flu pandemic, during that pandemic the young and healthy had the worst outcomes. I grew up in a family where the generation above me was always, just below the surface, in mourning for my great-aunt Nell, who was 27 when it hit and whom everyone just positively adored. My Uncle took me to Nell’s gravesite on one of the last trips we made to Pennsylvania.)

The world that emerges on the other side of the current ordeal will have changed. I will do everything I can to ensure that my business will survive, but it may not.

Other things will change as well. Maybe we will fall in love with some of the aspects of the closures that were positive.  Because it’s a drumbeat that goes on, we take for granted (“accidents”) the huge number of deaths from car crashes.  Just like the 2008 recession when about 3000 fewer people per year died, thousands of lives will again be saved by the shutdown, the people who don’t die in the car crashes that won’t happen. These people, however, will not know who they are and will therefore not be eternally grateful.  No, I’m not suggesting we reduce highway fatalities by reducing economic activity. We can reduce speeds and enforce the reductions.  (Speed is the leading predictor of highway fatalities. If you want to know the comparative likelihood of a fatality at two different speeds, make them a fraction, say 90 mph divided by 60 mph. Then multiply this fraction to the 4th power!  Even drunk-driving pales in comparison with fast driving, if the drunk drivers do not speed.  All this is from a great book, Traffic Safety by Leonard Evans.)

The Northern Flicker can look drab at 40 ft., but can dazzle at close range.  Flickers are ant-specialists.  This male bird at our house picked ants off the limb shown, one by one, each ant about a half inch apart, till it reached as high as it could reach, and in doing so posed for this photo.

This Downy Woodpecker was in our back yard off and on in March.

This was our first-of-year Townsend’s Warbler at Butyl Creek, the recirculating creek in our backyard. This guy showed up on the afternoon of March 29 and took a long bath. Warblers do love to bathe!

This Chestnut-backed Chickadee is swimming in the deep end. A Robin is approaching at the lower left. Orange-crowned Warblers are in as of April 6, 2020.

Do NOT wash your car.  Here world-reknowned lichenologist (there aren’t that many lichenologists, true) Richard Droker shows Delia an unusual lichen on my car, which is a Tesla Model S. No wait, I’m getting demented, it’s a Geo Metro.  I was peppered with questions from lichenologists around the world. Do I park routinely under a tree?  Is the car often parked in areas with less air pollution than Seattle? There was lots of admiration.  Geo Metro owners aren’t used to being made to feel this way.

I’ll get Rick to give me the Latin names of these lichens but it will be Latin to me.

Anyone who follows this blog is familiar with my Cannon Powershot photos that are always slightly out of focus. Youall deserve an occasional very sharp shot with lots of information. This is a Black Oystercatcher from Deception Pass State Park taken by Rick Droker early this March.