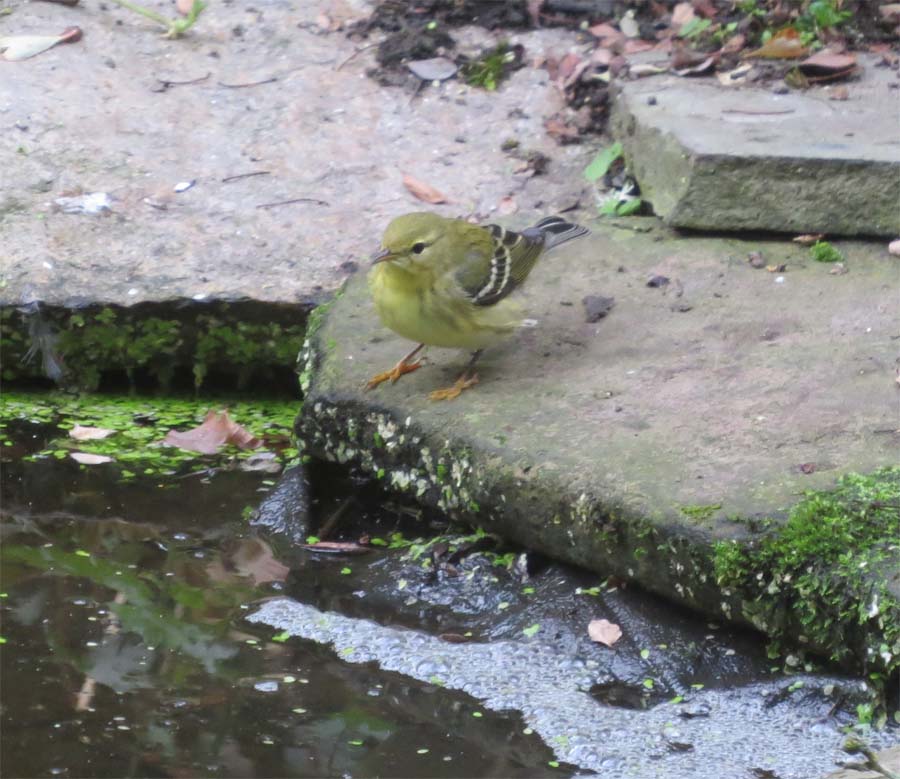 Posted at 17:56h in sightings by EdNewbold 0 Comments
0 Likes

Change the words to the old song:  The CREEK goes on forever and the party never ends!

A rare bird–a Blackpoll Warbler– for Washington State showed up to take a bath and be part of the ongoing party at Butyl Creek, our 15 foot recirculating creek in residential Beacon Hill.  It was one of 27 species that showed up by 10 am today, all but three took a bath (the ones that didn’t? A Bushtit flock got scared off, a Violet-green Swallow flying overhead wasn’t interested and a Bewick’s Wren that vocalized.  Bewick’s Wrens are not nearly as into bathing as most other songbirds, in our opinion.) 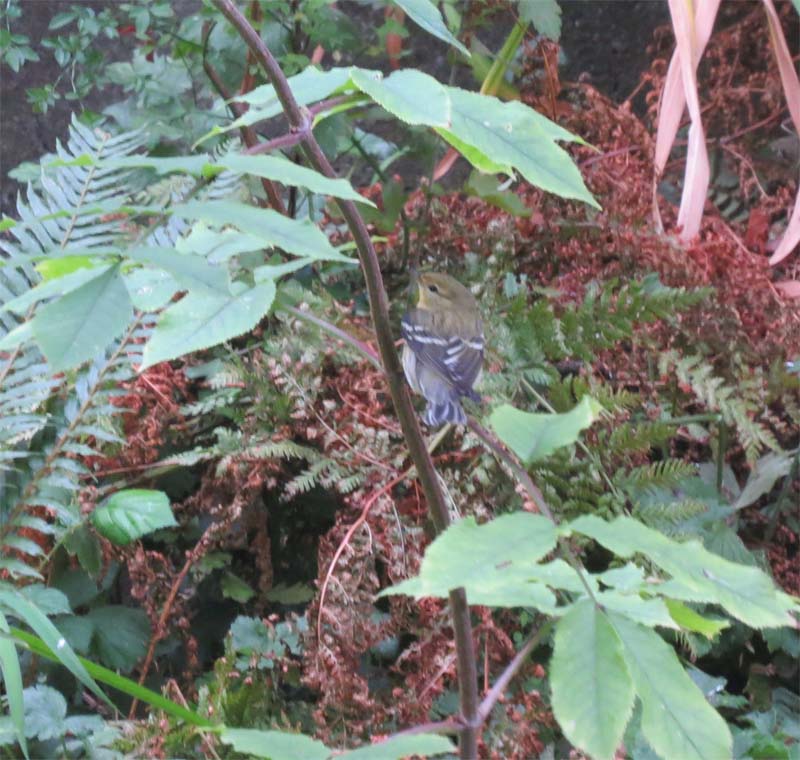 The Blackpoll Warbler migrates up the eastern and central parts of the continent and then many veer westward to breed across the North American taiga, or north woods.  In autumn the birds head back in the same direction but this bird, possibly because of the fires,  decided to fly more to the southwest and ended up on Beacon Hill.  The Blackpoll Warbler is especially known for it’s long flights south out over the Atlantic 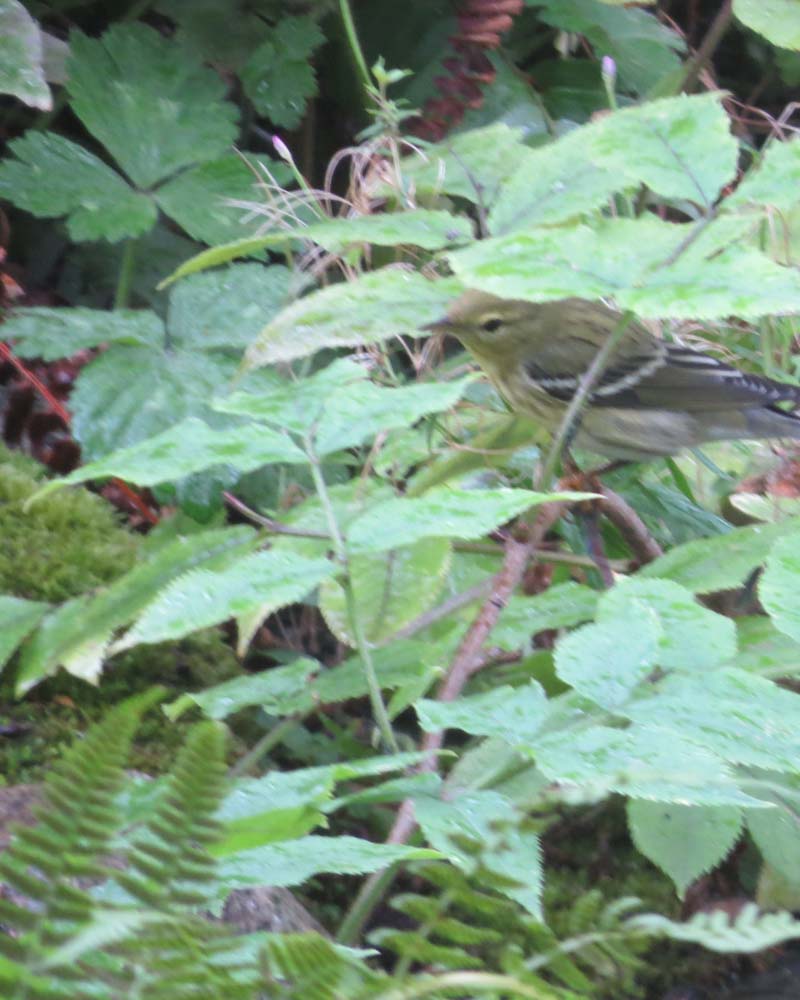 Blackpolls in basic or non-breeding plumage can resemble Bay-breasted Warblers.  I am posting these shots so experts can confirm this bird’s identity. (I haven’t seen a fall-plumaged Blackpoll in decades but growing up in Pennsylvania they were among the commonest birds in the fall woodlands) Delia and I think this shot indicates Blackpoll as the under-tail coverts are whitish, rather than cream-colored. (It was confirmed–Ed.) 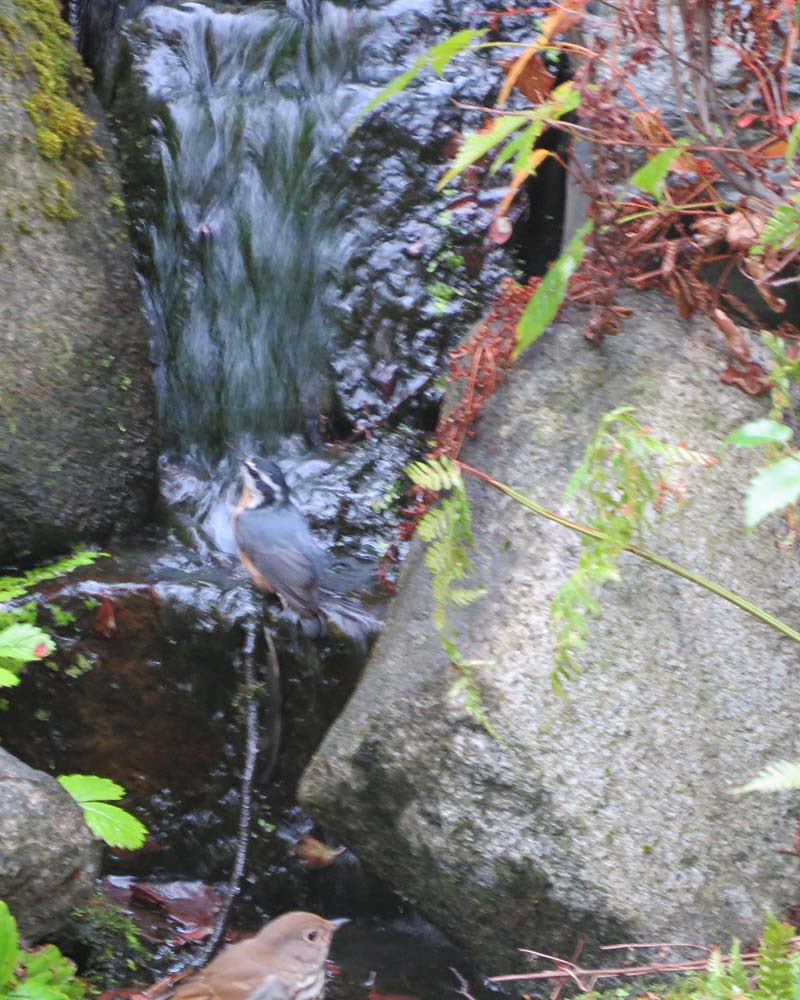 Some birds like to get right in the waterfall, like this Red-breasted Nuthatch.  Notice the Hermit Thrush also taking a bath. 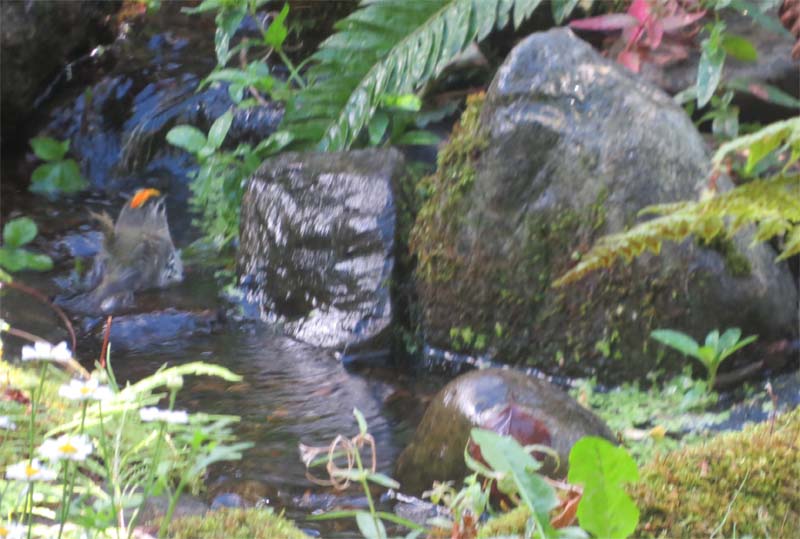 This male Golden-crowned Kinglet is bathing alone but came to the creek with his mate, who was nearby.  ‘Gokis’ always seem to come in a pair, as do the Nuthatches. 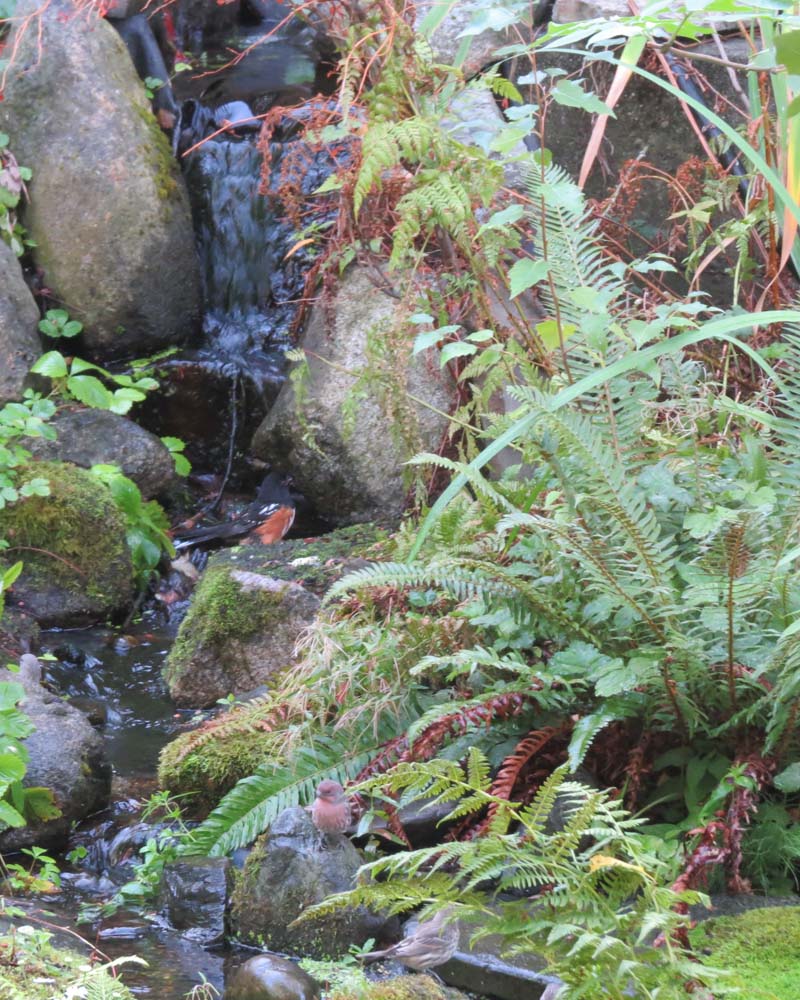 Meanwhile, at Butyl Creek, birds come and go and it empties out, but the party never really ends.  Seattle was plumbed in 1903, even the parks are plumbed,  so neither birds nor children have access to real creeks or running water (except where they’ve been daylighted, Thank you Thornton Creek neighborhood!).  This shot shows a Spotted Towhee and two House Finch bathing this morning.  The action seems to heat up at various times during the day, and admittedly there are stretches, even long ones, with no birds but sooner or later, another bird comes in driven by the very strong urge birds have to take a bath. 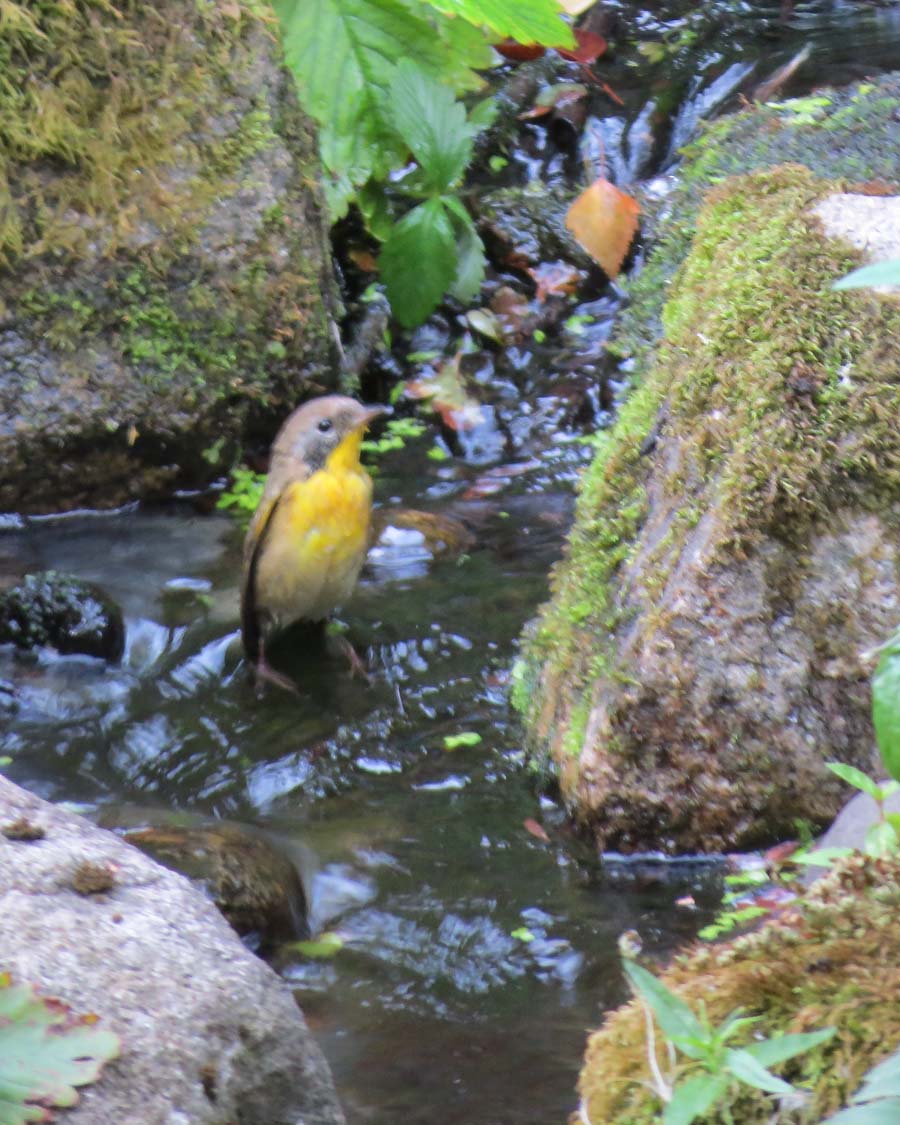 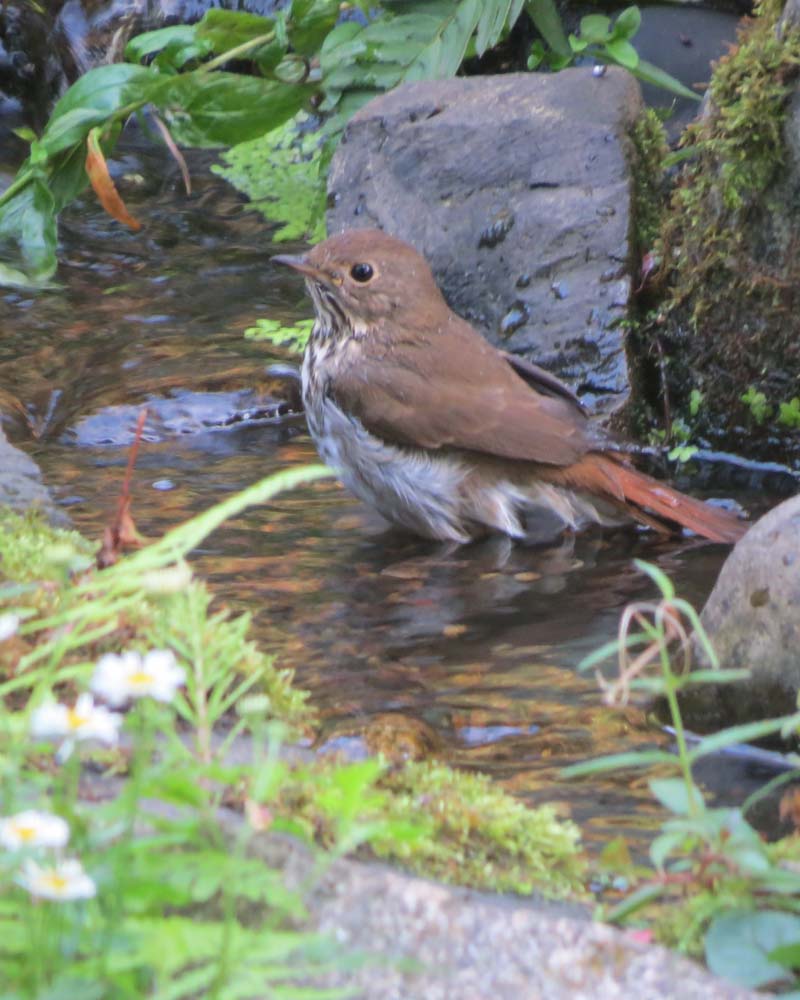 Multiple Hermit Thrush have been bathing daily, this handsome one two days ago. 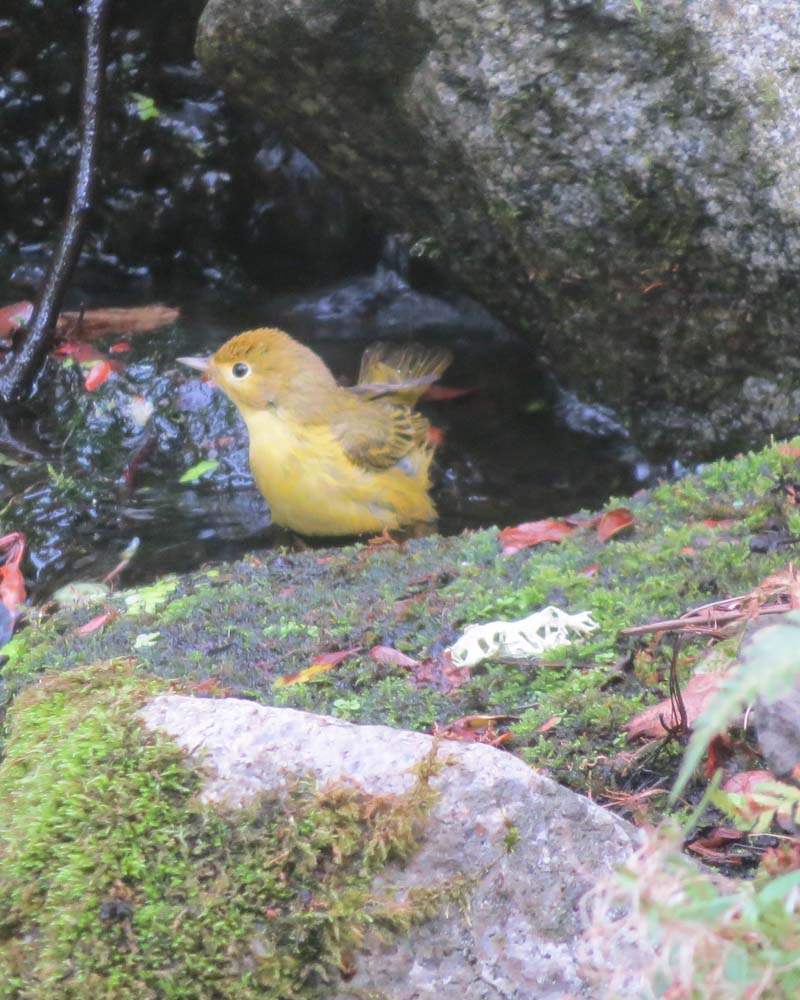 Ditto for Yellow Warblers.  This individual, which has been around lately, seems unusually rusty on the forehead.

Here is today’s list, and our personal all-time record yard bird day tally, (30 species) as it appears on e-bird:

Comments:    intermittent birding of front and back yards; water feature

Peregrine Falcon  1    spotted by Alan Grenon and observed by all of us from the back porch.  On a distant power pole for 20 min ahead of dusk.

Warbling Vireo  1    light white and gray bird with no strong markings around the eye;”dive-bathed’ in creek pool, as we have observed on many previous occasions in this creek.

MacGillivray’s Warbler  1    viewed for about 30-40 seconds bathing and ‘posing’ in creek; slightly faded adult male with dark gray head and bib, yellow belly, and short white very visible eye arcs. A short while later, upon hearing a distinctive hard dry chip, we identified this (or another) MacGillivray’s Warbler in the front yard.

View this checklist online at http://ebird.org/ebird/view/checklist/S39376644

This report was generated automatically by eBird v3 (http://ebird.org) 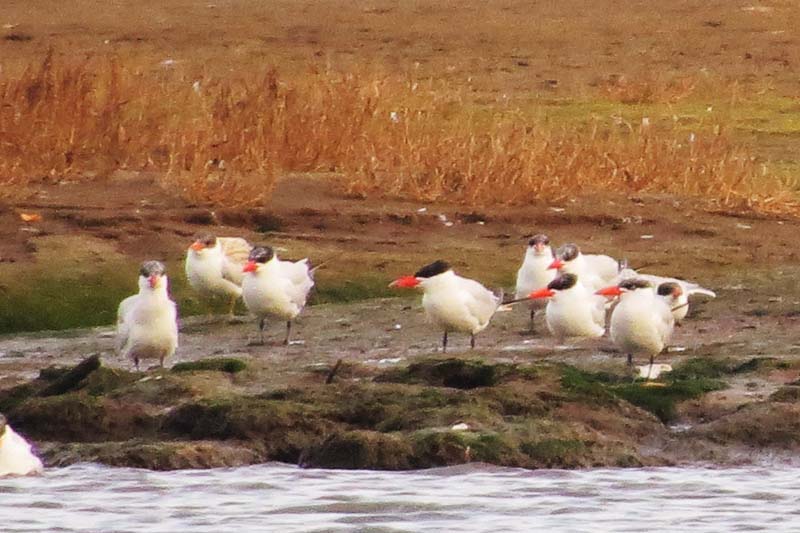 This is a good-news shot as it shows the Caspian Terns that have been cruising about over the Duwamish, the Industrial District, Lake Washington and Alki have been reproducing.  Quite a few babies, which are the ones with the bald pate and scaly gray back.  They peep while their parents growl like a Great Blue Heron.