Time to go Back to the Ranch
8259
post-template-default,single,single-post,postid-8259,single-format-standard,theme-bridge,bridge-core-2.7.4,woocommerce-no-js,qode-page-transition-enabled,ajax_updown_fade,page_not_loaded,boxed,,side_area_uncovered_from_content,overlapping_content,columns-4,qode-child-theme-ver-1.0.0,qode-theme-ver-26.3,qode-theme-bridge,wpb-js-composer js-comp-ver-6.6.0,vc_responsive,elementor-default,elementor-kit-12768

Time to go Back to the Ranch

02 Feb Time to go Back to the Ranch

Posted at 20:43h in sightings by EdNewbold 0 Comments
0 Likes

We have to make a trip down to the ranch where Delia’s late dearly beloved parents spent their last 38 years. 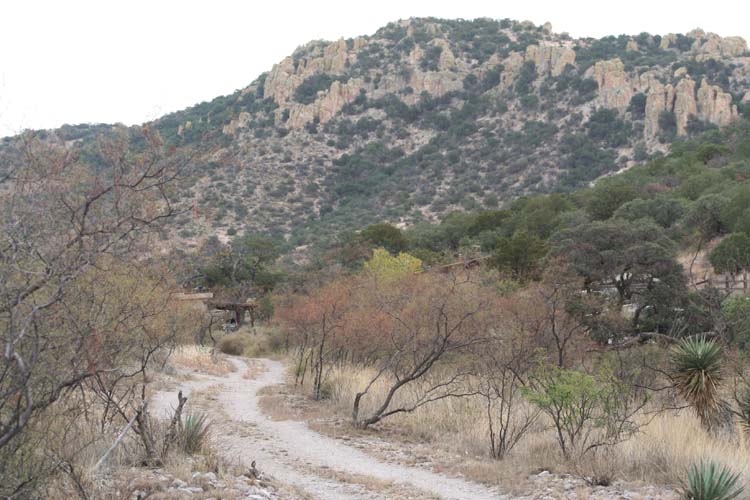 Calling it a ranch may sound pretentious to some, as it is a conservation ranch with no livestock.  It’s in the center north-south spine of the Peloncillo Mountains in the bootheel (extreme southwestern square acquired in the Gadsden Purchase) of southern New Mexico.  The house is in Post Office Canyon, in this picture it is hidden to the right and those are the White Cliffs looming above it. 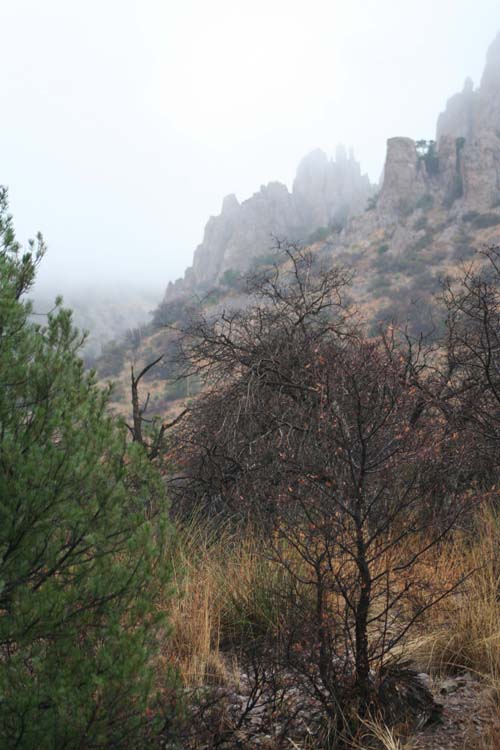 We’re always praying for rain in New Mexico, as we also are doing here in Seattle now that we are a full 10 inches behind for the winter cycle beginning in October.  The ranch had a very good summer rainy season in 2013 but we are having a terribly warm and dry winter.  Not particularly surprising given the events in the weather world.  The shot above is of the “Red Cliffs,” in a welcome rain storem. 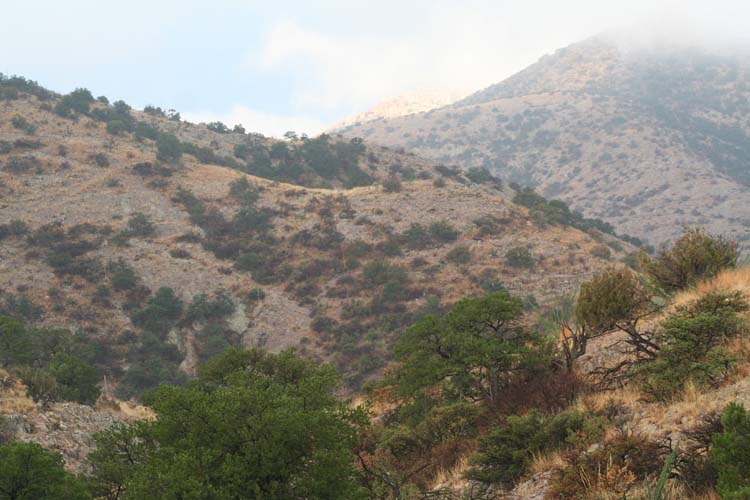 The area is chapparal, oak-juniper woodland with some Pinyon Pine, grassland, shrubland and open rock.  This photo is at the top of Brushy Canyon looking south down the range.

From what I know the area is considered to be in the Chihuahuan Desert, but the word desert can be very misleading as it has a rainfall average of around 18 inches, more than Sequim, WA, and if everything goes right, more of it comes during the growing season.

We won’t be seeing hummingbirds this visit, it’s too early, but there can be quite a few at times at the ranch.  The Lucifer Hummingbird, named for light, is a ranch specialty.  This shot shows mostly migrating Rufous Hummingbirds crowding one of the feeders at the house.  The bird with the broad dark-blue tail is a Broad-billed Hummingbird. 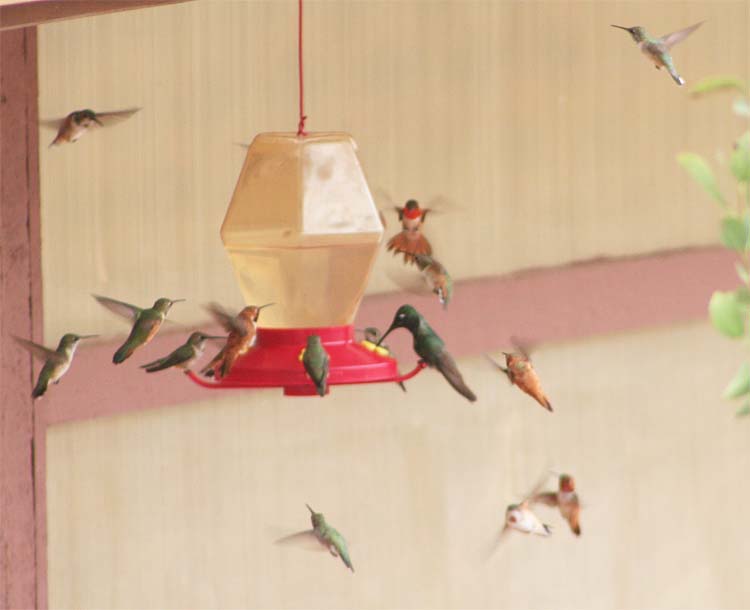 And here a gigantic, by hummingbird standards anyway, Magnificent Hummingbird has taken a position at the feeder. 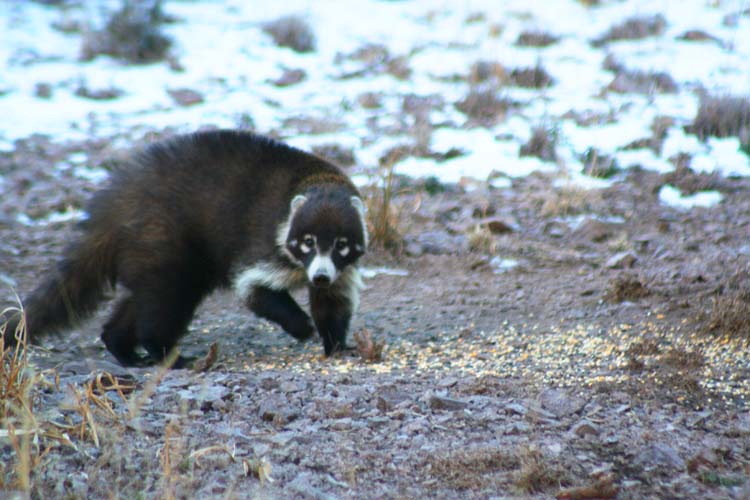 In the way of Mammals there are lots of White-tailed Deer, Mule Deer, Gray Fox and Striped Skunk at the ranch.  Occasionally Coatis–like this big lone male–come by and occasionally Black Bear, Javelina, Bobcat and Mountain Lion can occur.  Warner Glenn, a Peloncillo rancher who is a professional cat-hunter, located and photographed but did not take a big Tom Jaguar in the 1990s. 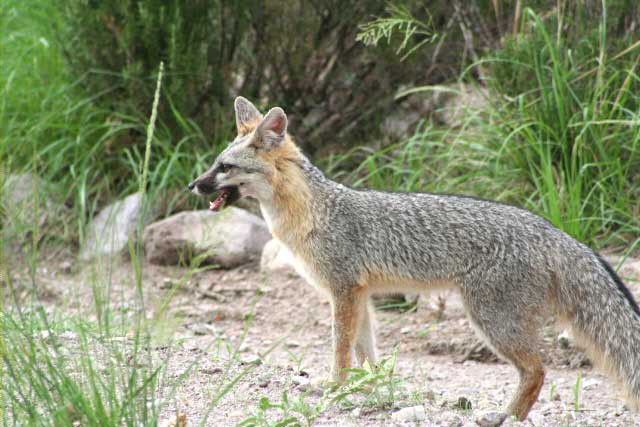 Bob and Katie always used to leave table scraps out for the Foxes and Skunks.   This  Gray Fox showed up nightly for quite a while. 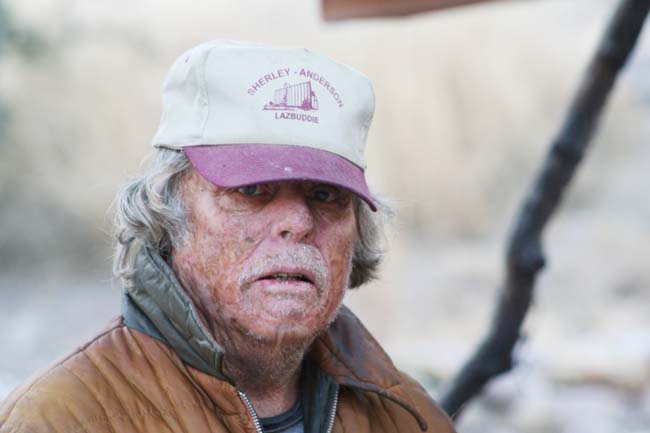 CD Littlefield lives on the ranch in a separate house.  He is the author of the book Birds of Malheur, as well as many peer-reviewed wildlife-biology articles, many on the subject of Sandhill Cranes.  CD is doing a monumental research project on the ranch gathering data from many bird transects, some at the far corners of the ranch which can make for long hiking days.  Perhaps because he doesn’t like to spend money unnecessarily and the nearest grocery store is 100 miles roundtrip, CD has been out of beer for over 2 months.  Here we come, CD, and that’s one of the few bad situations in the world today that we can actually help rectify.