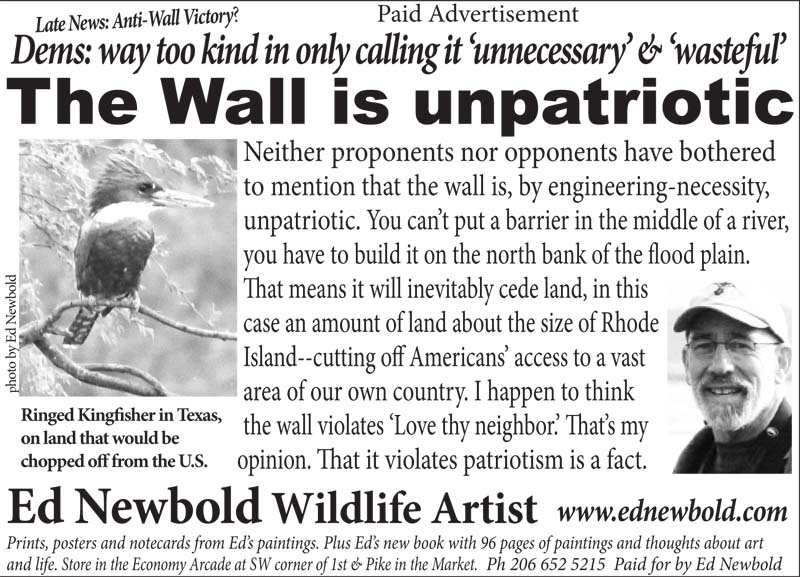 I’m running the ad shown above in the Seattle Times A-section Friday, 2018.

If this wall is imposed on America, the mainstream news media will bear some of the blame. They have never picked up on this story, even though it’s out there hiding in plain sight. They call it a “border wall,” (I heard it called that on NPR on Dec. 24) when it is not on the border, but in some cases miles away, running through America.

I am also saddened that the message of the wall’s assault on patriotism never appeared to move anyone, particularly leaders in Congress who are against the wall.  They would often call it senseless or unnecessary, but that could be said about an extra chocolate cake at a birthday party. This is a case of national self-mutilation.

I would ask people to imagine any river–but one that they are familiar with.  Then imagine a wall on one bank, which would have to be built where the land starts to rise from flood-plain floor. This is what we are going to build. It’s not a border wall and by engineering necessity it can’t be a border wall.  It’s a wall through America.

. America will never recover from this dastardly, mean spirited act of aggression against itself.

Above is the ad. I would love feedback. I guess I haven’t been able to open the comments here, but anyone with any response positive or negative is more than welcome to email me at ednewbold1@yahoo.com