Watch where you Graze!
15195
post-template-default,single,single-post,postid-15195,single-format-standard,theme-bridge,bridge-core-3.0.1,woocommerce-no-js,qode-page-transition-enabled,ajax_updown_fade,page_not_loaded,boxed,,side_area_uncovered_from_content,overlapping_content,columns-4,qode-child-theme-ver-1.0.0,qode-theme-ver-29.3,qode-theme-bridge,wpb-js-composer js-comp-ver-6.9.0,vc_responsive,elementor-default,elementor-kit-12768

Watch where you Graze! 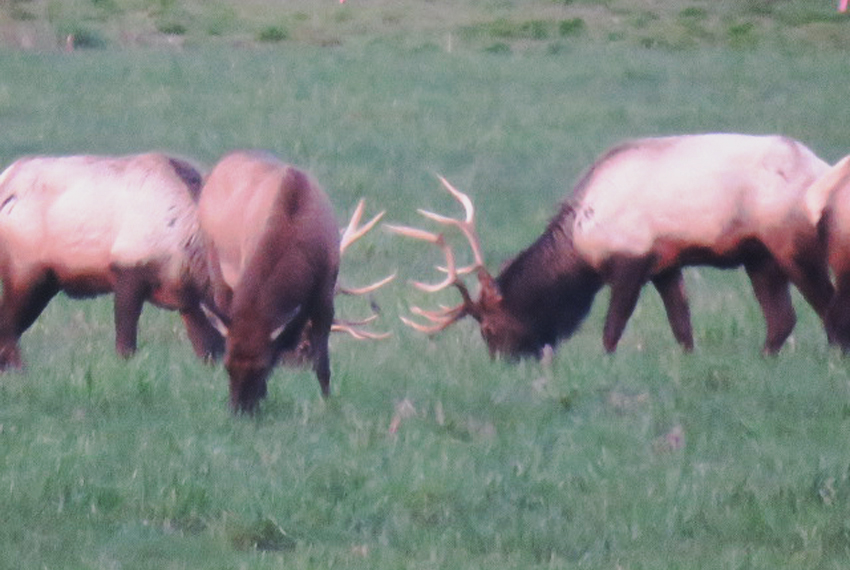 27 Mar Watch where you Graze!

Posted at 03:43h in sightings by EdNewbold 0 Comments
0 Likes

These Elk were just east of Seattle in the Snoqualmie Valley. As the day’s light faded, they came racing out of the forest to socialize in a very large field, there were many. I did not realize that Elk bounded just like Mule Deer or Kangaroos. Surprised I didn’t know that. As the Elk got closer to their friends, the gallop turned into bounding jumps and they appeared–from a distance–to be quite joyful. These two Bulls tangled antlers, butting a few times, but it did not lead to major hostilities.

You can see there were a lot of Elk, they are at the far end of the field and more joined as we watched. Plus a Canada Goose or two in the foreground.

This is a female or possibly a young male Red-flanked Bluetail in Seattle. She is an active insectivore and likes to flick her tail and her wings. (Males are bright blue and the apricot streak is much brighter.) This is a bird that breeds across Siberia from the Ural Mountains east to Japan and winters in Southern China. But of course, some visit Seattle. Second state record. Conjecture is that a few come through now and then and escape notice. They like dark forest-y areas and stay within 6 feet of the ground, perhaps better to avoid accipiter hawks and Merlins. This caused a major stir in the birding community and the host of the stakeout. Nancy M. has emerged as a great leader, solving a stakeout that was scaring the bird, annoying the neighbors, and not getting the bird seen by the birders, i.e., failing every way it could. By addressing the bird’s needs first, she solved all the problems except she should be getting the big bucks for all the work she’s doing and that’s not happening..

Our First-of-Year Western Garter Snake, from Stillwater, WA. What a cutey!

This next is a really great photo!

This is an excellent photo I got of a Yellow-billed Loon off Potlatch State Park on March 16. You don’t think it’s excellent? Well, you sure don’t think it’s a Common Loon with that honking yellow bill and there is no way it’s a Pacific or Red-throated Loon, so I guess this is an excellent photo. The bird is in its winter plumage. It’s larger and lighter than a Common Loon, the world’s largest Loon. Not exceedingly easy to see in WA state.

This is Brian Pendleton and Delia looking for the Yellow-billed Loon at Potlatch State Park on the Hood Canal. Brian and Darchelle, despite the extra difficulties they face birding are tied and at this moment both number one in the state for ebirded sightings in 2022. The closer you get to Brian and Darchelle, the more you tend to be in awe of this accomplishment. Despite the fact that Brian can’t really turn his head or use binoculars, I counted 6 times during the day when he was the first or only person to spot a bird we were all looking hard for.

This little Orange-crowned Warbler became the first spring migrant to visit Butyl Creek, the artificial recirculating creek in our backyard on residential Beacon Hill, on March 26.

Orange-crowns mostly don’t show an orange crown except when bathing., this bird was getting in position for that. The migration may not be what it used to be, with Swallows, Swifts and Nighthawks especially degenerated, but there are still millions of birds making their way north across the United States heading for their breeding grounds. Some Orange-crowns go to Alaska, this one is the brighter subspecies I believe so it is probably heading for a breeding territory near here in Western Washington or SW British Columbia.

Beavers hard at work making the world a better place

Beavers are the reason the continent was explored and settled. Beavers are the reason there is nice topsoil in the river valleys. Beavers are the reason there was so much wildlife in America. Beavers kept wildfire damage to a minimum. Beavers slow the flow of water to the sea and help the land to be verdant. Humans not only didn’t give them any credit, they almost drove them totally extinct and many people continue the war on Beavers to this day. It is mind-boggling to understand how efficient the old Beaver-trappers were, they must have had an energy level not seen in our present world as they didn’t just harvest a lot of Beavers, they completely extirpated them from drainage after drainage. Here’s a Beaver Dam in Stillwater, and the next two photos are of Critters that are only there because of the Beaver dam.

There were 12 or so Ring-necked Ducks in the Beaver Pond, plus a Pied-billed Grebe and 4 or 6 Mallards.

And quite a few Red-winged Blackbirds that are just now beginning to show off their wing patches.

95 of 100 Beavers polled were critical of this art piece.

We did not see the artisan, but it can’t be doubted that it was one or more Pileated Woodpeckers, and the work is currently on display at the Seward Park Gallery North, from the main spine trail.

This Douglas Squirrel may have had hopes the tourist season was underway in Potlatch State Park.