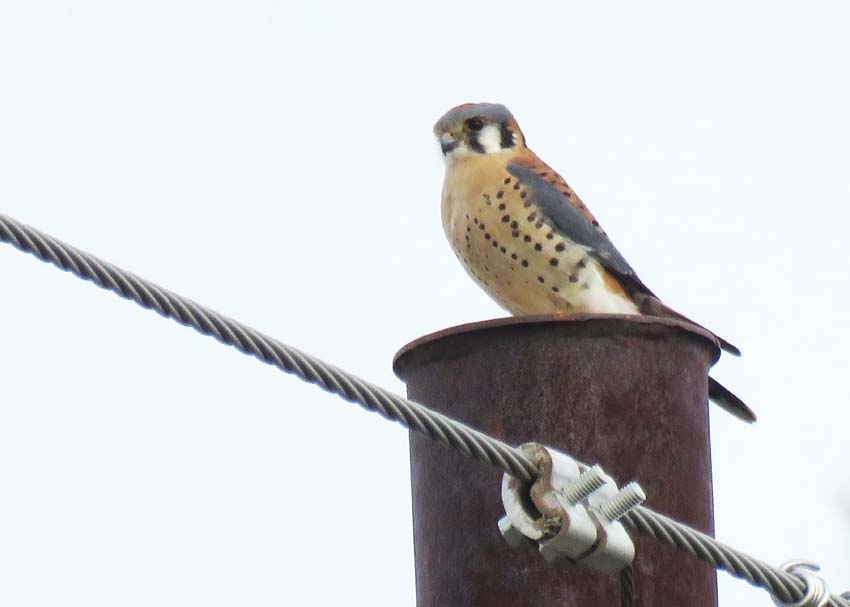 Posted at 21:45h in sightings by EdNewbold 0 Comments
0 Likes

The Border Wall may live in infamy, but also in irony—a perfect example of why people should be skeptical of big government projects. We were down in extreme southwest Arizona at the San Bernardino Wildlife Refuge, one of the lonelier refuges in the country, and one that is situated right at the border.

People who knew the Southwest predicted there would be problems. “You guys don’t know about the monsoon rains we have here,” they said: “This wall won’t work.” Now we hear that the monsoon rains in 2021 blew out a section of the wall at San Bernardino and you can walk right through if you follow the dry stream bed. But if you are a Cougar you may not be able to get to where the wall is blown out and in the highlands the wall is an intrusive unyielding presence. I hear there is video on the internet of a Cougar pitifully pacing along the wall trying to cross to the rest of its territory.

The small bird in this photo is a Loggerhead Shrike toughing it out in winter at San Bernardino, which was dryer than we have seen it in the past.

This Vermillion Flycatcher was at the Slaughter Ranch, which is adjacent to San Bernardino. There were fewer than usual in the big trees at the headquarters. You can see why God ordered the birds to multiply.

And we had a Northern Beardless Tyrannulet there, quite willing to pose for pictures. That’s not always the case.

Here is the wall with Mexico in the background. I spent $6000 on ads against the Wall trying to point out that it would unconstitutionally cede an area of US land equivalent in size to Rhode Island to a foreign country. In that spirit I called the Wall unpatriotic and an act of national-self-mutilation. None of these types of arguments ever caught on at all. I don’t know what the top Democrats arguments against the wall were because I fell asleep whenever they started talking about it.

There may never be a good solution to the border problem. When I say: “For capitalism to work efficiently, capital must be free to flow across borders,” I get a nod from people such as Business-minded Republicans. When I add “and labor must be free to flow across borders also,” it can be more iffy. I don’t know anyone who thinks we could have a complete welcome sign on our doorstep for various political reasons and I don’t know anyone who thinks we will soon. And if there is anything less than a welcome sign, there will be at least a certain amount of ugliness at the border. But the laws and immigration policy have gone way too far in aiding and abetting the ugliness, breaking up families and so on. And in fact, it’s now a crime to be a Christian in America, at least not in the borderlands. When we give a thirsty migrant a glass of water, we run the risk of losing the Ranch. Some of the migrants that appear in the Peloncillos, if they are lost or off-course, are within days of death. One guy said he had “walked all the way from Laredo.” and the assertion might not have seemed credible except his feet were all bloody. Another guy was already disoriented. Our late West-Texan friend Carroll DeWayne Littlefield used to hide jugs of water on the trail on his way out in the morning so he would have water to drink on the long hike back in the hot sun–and twice Border Patrol agents poured out his water. Did I mention he was an American citizen? The worst excesses of the agency include the killing of three Mexican boys or young men who were on Mexican soil and the covering-up of those crimes. Having said this, and for the record, I should say that we personally–Delia and I–have not had anything but friendly and positive interactions with Border Patrol agents, even after three agents tracked us for two miles or when Delia was walking alone and surprised two agents on horseback..) (That was a while ago. We no longer separate in the outback.)

Before all this, when we arrived in Tucson, we decided to visit Sweetwater, the most popular birding destination in Tucson, a water reclamation project which Nature has benefitted from.  This handsome American Kestrel was viewable from the parking lot.

There were thousands of Ducks at Sweetwater including this Mallard and 2 drake Pintails.

Down at the Ranch I despaired as always at the lack of precip and lack of winter snow-pack in the high country but there was some snow in the high Chiricahuas. This shot is of the Red Cliffs, about 6500 ft high, out the front door. According to CD Littlefield, the Red Cliffs which officially may be called Owl Mountain is the highest point in the northern Peloncillos. We heard a Great Horned Owl from the direction of the Red Cliffs and a Western-screech Owl not far up the canyon.

There’s the snow on the high Chiricahuas.

We had one small rain, about an eighth of an inch, that was thrilling but ultimately judged a tease.

Our friends from Silver City, NM, Emily and John, came down to visit. They were practically on their way to Ecuador where they were going to say a month with a friend. We wished them a great trip. Every birder wants to go to Ecuador, although John and Emily are more naturalists than simple birders. (Delia is on the right).

We  tossed stones off the road and did some shoveling in hopes of “improving the road.” But if there is a major microburst in the summer then things like picks and shovels are like a child’s toys. You need to call in a dozer. Once our neighbor helped us out using his own personal bulldozer and that was the only reason we were able to make it up to the house. This is Delia heading home carrying the clippers that she used to keep any errant Whitethorn Acacia or Mesquite from scratching the rental car. I noticed that she was accessorized for a trip on which we would see no one–she hadn’t realized it. We are both interested in accessorizing. I have plans to paint and publish a poster: “Birds invented Accessorizing!”

In the San Simone Valley the Pronghorns are doing well. We saw 12 moving quickly up the valley, running seemingly for the fun of it. This animal is so fast I hear that they race the cars traveling on the frontage roads in Wyoming.

The Acorn Woodpeckers in Portal Arizona were all over the wall of the Portal Library, which is painted bright red. I think they were trying to accessorize it.

Back in Seattle we haven’t seen a Pine Siskin, and of course I am worried about them. But their northern cousin the Redpoll is here in force. They seem to travel in groups of 50 and we’ve seen them at Green Lake, Marymoor and the Arboretum.

We were at Alki and two male Mergansers were in the surf requesting to be photographed. This is a Red-breasted Merganser.

And this is a Common Merganser. The females are also gorgeous in their own different way. Notice it is accessorized.

Barrow’s Goldeneye don’t seem to be doing well. We had this one female at Alki. Her foraging partner—(or is it more serious than that?) was a male Common Goldeneye.

This pair of sleeping Green-winged Teal were at Juanita Bay Park in February. This park is great for photographing Wilson Snipe, Wood Ducks and Greenies among others. Greenies are one bird that forgets accessorizing completely and just goes crazy with all different shades of green.

Meanwhile back on the home front, this Varied Thrush decided to take a bath in Butyl Creek today and while it was shaking like a dog it managed to catch some sun. There may be too much sun from now on. I fear Seattle has only two seasons now, Flood and Mudslide Season and Smoke and Drought Season. Hopefully we aren’t starting into the latter, but it has sure been dry of late.

There are a lot of Eastern Cottontails around these days, both here in Seattle and in the outback, this individual is from Wylie Slough up by Conway today on the 9th of Feb. I’ve been surprised by remarks indicating some people don’t like them for various reasons. One reason is they are non-native, and presumably somebody has evidence that they are declining something that has a right to be here. Other people have issues with what they eat. As for me, I adore them. I grew up with them back in Southeastern Pennsylvania. I am delighted every time I see one. This one let me get pretty close and was obviously working hard mentally to decide how worried to be. My position is that whether we like it or not we are building a novel eco-system–Seattle will not soon again be a 300 ft. Doug Fir forest with Red-backed Voles and Spotted Owls. We might as well welcome and enjoy any addition that isn’t obviously bringing down everything else, like English Ivy may be doing. And let’s face it, this critter is seriously cute.

This Whooper Swan was at the old Prison Farm south of Monroe on the 9th of Feb. Kudos to the sharp-eyed observers that picked it out of a flock of 140 Trumpeter Swans. It’s the second record for Washington state. The bird is not as large by weight as a Trumpeter Swan but it is a bigger bird, with an over-7 foot wingspan, and it’s a bit taller when it stands. Perhaps it has a long migration from it’s breeding home in the boreal forests of Norway, Finland and Russia. This bird is very rare and drawing many birders, and it’s a seriously hard-working farm so be very courteous, as brief as possible, and respect private property.