We spend a day overseas! 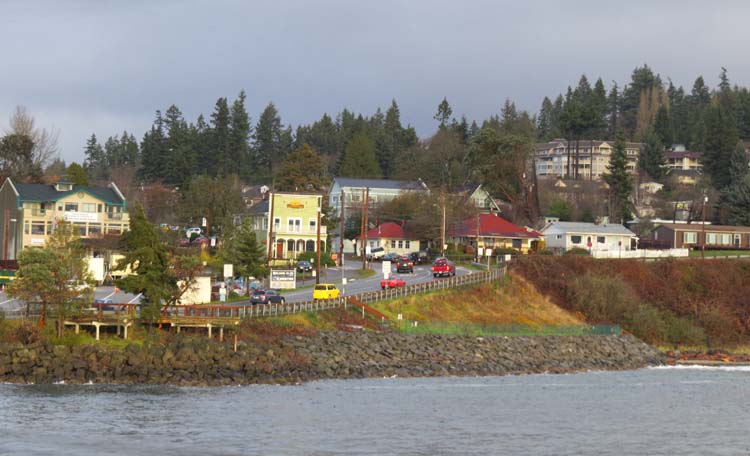 08 Dec We spend a day overseas!

Posted at 01:14h in sightings by EdNewbold 0 Comments
0 Likes

I just realized that since the Inland Waters of Southern British Columbia and Western Washington have now been renamed, and are officially the Salish Sea, that means that a trip on one of the ferries is an oversea voyage.

In spite of the constant fare-increases by the WA Dept of Transportation which would rather spend its money widening highways than paying for the big boats, there is still no cheaper oversea destination than Kitsap, Jefferson or Clallam Counties.

Delia and I and Brian Pendleton went over yesterday.   We’ve been getting Pineapple express weather systems that are pelting the new snow layer with rain and drenching us in the lowlands, but as the oversea port of Kingston hove into view, we realized we were going to be in for some really nice weather and sharp raking light.  I actually have never thought of Kingston as being especially pretty, but yesterday changed that, this is what the town looked like on the way in.

These two Cormorants had been lined up on the Edmonds side.  They  wanted to emphasize the point that I shouldn’t continue to confuse the two species because their immense size difference should always be apparent.   Pelagic Cormorant on the left, Brandt’s Cormorant on the right.

At Shine Tidelands across the Hood Canal Bridge (double-overseas!) this Red-tailed Hawk  was kiting in the wind.

We had Eurasian Wigeons here and there.  This male was at Gardiner Beach.

An Eared Grebe was there also.  We had Red-necked, Pied-billed, Horned and Western Grebes also, and the three Loon species that are regular in W. WA:  Common, Pacific and Red-throated.

We had two species of Mergansers during the day,  the Red-breasted above was at Kingston and the Hooded (below) was at Gardiner, although we saw many of both.

The John Wayne Marina is always a bit over-manicured for my taste but gosh, it was looking great yesterday.  The close boat added a nice touch of red.

We had Long-taileds Duck at John Wayne and also later at Dungeness Spit.

This male Belted Kingfisher, no orange, was at Gardiner Beach.

On the way to Dungeness Spit some Ravens were getting excited about an Eagle.  (Ravens are about the size of Red-tailed Hawks.)  We had Northern Harriers in the area and a Kestrel on the way into Sequim.   One Black Scoter was at Dungeness Spit and we were glad to see a Marbled Murrelet pair there.  We had at least three pair of Marbled Murrelets at Gardiner,  and some at John Wayne also.  That’s a bird that normally always comes in pairs with the two birds never being far from each other.

We had Murres at Gardiner and Pigeon Guillemots  at all four locations.  We had a lone Coyote on route 104 eating Salal berries and a River Otter at Gardiner.  An oddity, at least I thought so, was a Pied-billed Grebe hanging out in the water on the ocean-side of the Dungeness Spit.  Brian and Delia at John Wayne.

As the light began to fade on Dungeness, the rain whipped up and the wind kicked in.  We’d been really lucky.   This is one more shot of the Long-tailed Ducks.