We take Bragging a step further: an outdoor Yard-list Sign 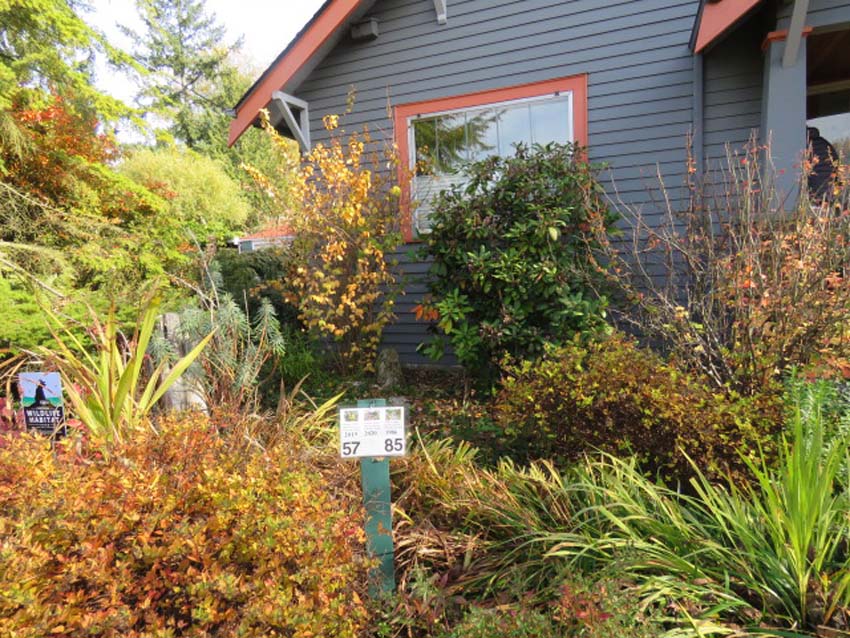 Posted at 03:10h in sightings by EdNewbold 0 Comments
0 Likes

Some may suspect that Delia and I are very proud of how many birds we get in our tiny yard on Beacon Hill, which we credit to the fact that we don’t mow or hardscape, that we seem to live on a migration route, and that we have a recirculating creek.

Now we are officially bragging about this 24/7 with a sign in our front yard listing the number of species seen in 2019, soon to include 2020, and lifetime, or since we’ve moved here in 1986.

Actually we’ve seen 58, we recently had a Sharp-shinned Hawk.

Perhaps the most important factor in our relative yard-listing success is the creek. It continues to astound us how many birds stop by to take a bath. This shot is from Novemeber; a Chestnut-backed Chickadee, a Yellow-rumped Warbler and a Spotted Towhee are sharing a stretch of the creek.

This is a Sharp-tailed Sandpiper that seeming to hold court with threee Killdeer out at Three Crabs near Sequim, WA on Nov 19.

Today at Griffeths Priday State Park north of of Ocean Shores Brian and Darschelle Pendleton, Delia and I found this Mountain Plover that had been previously located by a bird survey crew counting dead birds for WDFW I believe.

Brian picked this first-year Glaucous Gull out of the mix of Gulls at Connor Creek. It is fairly rare in WA and larger than our common gull, the Glaucous-winged Gull, and a resident of the high Arctic. Adults are quite striking, I’m told. A few are seen each winter in Washington.

We were very worried that we wouldn’t be able to get a shot of the Glaucous Gull, but as this photo of Darschell Pendleton and the gull shows, our fears proved unfounded.

Here is a Snowy Plover. Delia thought there were two, and there might have been. These haven’t been seem much in the Copalis Beach area recently, Brian tells me, so we were delighted.

We were also delighted to see about 18 Western Meadowlarks on the way back from the beach on Ocean Beach Road. Thanks partly to the Ethanol mandate, this species has suffered huge losses across North America.

Delia on the left, Darshelle and Brian on a “Lucky Ride.” This was the ferry trip, Nov 19, 2019, on which Delia and I saw our first ever Orca-from-a-ferry. I have painted two paintings of Orcas and Ferries but until now I always have had to confess, “NO, I’ve never had a lucky ride myself.”