We get swept along on the Brian-and-Darchelle-Tornado 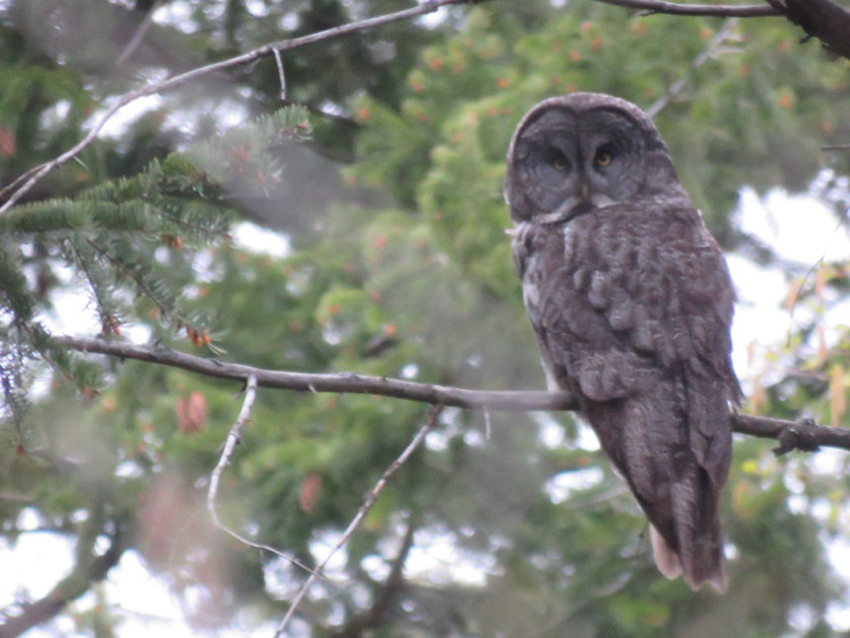 Posted at 01:04h in sightings by EdNewbold 0 Comments
0 Likes

For Delia and I going on a three-day birding trip with Brian and Darchelle is like those stories you hear now and then from the Plains states of people getting picked up by a Tornado and carried a long distance, then gently put back down on the ground.

There are key differences , however. The main one for our purposes is you don’t get 46 new YearBirds from those kinds of Tornado rides.

We drove up to their house early on Thursday May 12. Darchelle and Brian have a flare for the visual touch. This is their house and notice, NO BORING LAWN!

We headed over Snoqualmie and picked up our first YearBird, a SPOTTED SANDPIPER, on the Yakima River and of course a BLACK-BILLED MAGPIE soon after. Our first Target in this tour around Central Washington was FORSTER’S TERN, which took us three stops in a circle around Potholes Reservoir. About four Terns were foraging maybe a half-mile off-shore from the SW corner of the lake, and it seemed to be touch-and-go for a while getting Brian to see them. Brian would have been first on the birds back in the day, but now we had to help him get a visual using special strap-on opera glasses. These beautiful Terns helped by having white wing-ends which flashed in what sunlight was available as the rain and a cold wind whipped up waves on the big lake. We encountered our first of many GREAT EGRETS (shown) in the area and had a pair of SWAINSON’S HAWKS fly over the car.

As we swung south toward Othello we stopped for as long as we could stand at one of the WORST/BEST places to bird in Washington, Para Ponds. There is not enough shoulder at Para Ponds to pull off the road and not be at least a little bit in people’s way. We are acutely aware of the fact that “Birder-from-Seattle” doesn’t normally rank as the most revered group of people on the Eastside, and when you are awkwardly parked at Para Ponds, you are somewhat getting in the way as people drive home from work. We picked up LONG-BILLED DOWITCHER, REDHEAD, YELLOW-HEADED BLACKBIRD, BLACK-NECKED STILT and AVOCET.

From there we scooted over to County-line Ponds where we watched some stylish WILSON’S PHALAROPES that Darchelle got great photos but I didn’t even try, given the distance and conditions.  A LONG-BILLED CURLEW flew by that I at first thought was a Prairie Falcon. They are both all brown above.

Our next stop was at a place where people are working to save our beleaguered Western Washington population of BURROWING OWLS by installing artificial nesting burrows. This bird traditionally uses Prairie Dog holes, but people wiped those out working under the now-questioned belief that the burrows posed dangers to Cattle. Brian spotted an Owl watching us just off the road. In spite of his inability to move his head, Brian is usually the first to spot most anything we see, and usually the first to hear most anything we hear.

Our first night was spent at the Airport Inn in Pasco. Nearby was a Mexican Restaurant with great food that had an 8-piece Mariachi band on hand that did among other things a wonderful rendition of Juan Gabriel’s and Rocio Durcal’s old hit Si Nos Dejan.

Our next couple of stops were at McNary National Wildlife Refuge, where we ran into another pair of birders lack an off-switch, MerryLynn and Mike Denny. Mike informed us of the first screening of his new film on life in the desert, Life of the Desert a TV series narrated by Mike Denny & filmed by Daniel Biggs.. SECRETLIFETV.COM produced by Blue Mountain Television. Go on line to purchase tickets to see the premier screening in Walla Walla or, once it’s out, it will be available on ROKU..

.We found three distant WHITE-FACED IBIS, BULLOCK’S ORIOLES, WESTERN WOOD-PEWEES, LAZULI BUNTINGS (shown), HOUSE WRENS, BANK SWALLOWS and a LEWIS’S WOODPECKER at McNary. Mike also informed me that the aquatic eco-system at McNary is being destroyed by a government Public Health agency in the name of fighting West Nile disease, and we saw some of the infrastructure of the war there on Mosquitoes. A drone is used to cover the entire wetland, (and many others throughout the US) with a chemical that kills all aquatic invertebrates. The more technology people have, the more they can get the world they always dreamed of, and if that world doesn’t include wildlife I guess God, the creatures He/She told to multiply, and all of us who love them can go take a hike.  Mike lamented the relative decline of all wetland birds at McNary—and indeed, the place was way more birdless than it should have been. It was Mike or I think MerryLynn who said, “We are just grateful now for any birds we see.” Of course, all this stuff, and the spring migration, is not being reported, not even on NPR that is so beloved in Seattle–including at times, by yours truly.

Staying in McNary, we ventured out to look at the Walla Walla River delta. There were two beautiful but very distant FRANKLIN’S GULLS at a sand spit there, and a BLACK-CROWNED NIGHT HERON flew high overhead. This is a tough spot to birdwatch, everything is far away, including the Coyote that was trotting down the beach. The photo shows MerryLynn and Darchelle helping Brian get a look at the distant Franklin’s Gulls.

Our next stop was Hummingbird Haven outside of Walla Walla the stunningly beautiful home and grounds of Theresa Larson. Theresa has feeders out that attract large numbers of four species of Hummers, BLACK-CHINNED, CALLIOPE, RUFOUS and a small number of Anna’s. In keeping with Delia’s and my campaign to try to promote monetizing private-sector bird tourism and habitat protection, Delia and I made sure to “push” a donation on Teresa, who has no setup in place for collecting money. We get it that what drives Hummingbird Haven is not any desire for money but rather a desire to make the world a beautiful and better place. But people who are making the World a better place don’t go to the store and get given their supplies for free. That’s why it’s important for us birders to do everything we can to destigmatize the ask for money.

We traveled on and found a WILD TURKEY before encountering two DUSKY GROUSE, we think both males, displaying, perhaps for an unseen female? Sorry for all the fuzzy photos. This one was by necessity through the car’s windshield.

This bird was initially displaying but seemed to get run off by the first.

Brian and I were sitting on the right side of the car and only the two of us saw what we both thought was a fairly light-colored Wolf that took off running down the steep slope on the car’s right.  The worst photos are when there is no photo.

Soon we saw a HUGE bird take flight into the woods apparently in fear of our approaching car. We despaired of seeing it again before seeing that it had landed only 100 feet into the woods. This is my favorite shot of a GREAT GRAY OWL that I’ve ever taken and I thought she/he looks a little beatific.  There were CASSIN’S FINCHES in bushes by the side of the road.

Mike and MerryLynn told us where a TRICOLORED BLACKBIRD colony was. This is a bird that is getting hammered by the changes we humans are wreaking as it is now being chased out of its home state of California by the increasing agricultural footprint and the heat and drought. This colony may be the largest refugee colony in Washington, Mike and MerryLynn believe.

This is one of the few nesting FERRUGINOUS HAWKS in Washington State. We stopped by a little later and saw the male leaving after having dropped a rodent for the kids to eat. It’s the largest of US hawks.

The plan was use the last day to work the eastern slope of the Cascades, perhaps hoping for a Goshawk for Darchelle and Brian. But Delia checked the Rare-Bird-Alerts and there had been a HUDSONIAN GODWIT found at Gloyd Seeps.  This is arguably one of the most gorgeous of the Sandpipers, a long distance migrant that Delia and I had only seen in Paraguay where it spends its winters and were Delia lived as a child.  Darchelle hit the breaks and steering wheel, throwing the car into a skidding 180 (not really) and we were suddenly headed back to Othello.

It took us over three hours the next morning to get the Hudsonian seen and documented by the four of us. At one point, Brian and I were speeding along the gravel path with his wheel chair. Delia and Darchelle were scouting the bird and looking back across the marsh at us hurtling along, they knew Brian would never be the one to say “Slow down.” Brian has run 230 marathons in his life (Darchelle 35) and founded a marathon (Light at the end of the Tunnel Marathon, along with Susan Pendleton). He always used to be the fastest at covering ground in search of birds. The bird was a male in breeding plumage. My photos are way too far away and out of focus to do it justice, but they do show basically what it looks like. We wish it the very best in this future breeding season up north.

With the Hudsonian Godwit and some others Brian and Darchelle’s are at over 302 bird species seen in Washington state this year, and they are the current leaders of the visible “top 100” category on e-bird, a  “competition” that could easily be dismissed by many for many reasons but one that I see as forming a foundation for the advancement of the sport of birding. Birding has a downside, like everything, and ethics are required before it is a uniform positive for birds and people, but I feel that without a compelling human relationship that unifies an interest in biodiversity with the natural human interest in rating people’s accomplishments, there can be no long term hope for growth of interest in birding. If no one had ever kept score and gotten competitive in baseball, no one would have ever cared whether Casey struck out in Mudville or not.

We next headed for some stops at Quilomene for sagebrush birds, BREWER’S SPARROW, WESTERN BLUEBIRD, SAGEBRUSH SPARROW and SAGE THRASHER, after a ROCK WREN by the Columbia River.

Along the Teanaway River on the way to Cle Elum we found our first of the year BLACK-HEADED GROSBEAK and GRAY CATBIRD plus another YELLOW-BREASTED CHAT which I forgot to mention at McNary.

I am an old man. I was exhausted, but thrilled and I have memories that will stay with me probably for the rest of my life. It was an epic trip for us, a thrilling tour bringing us into contact with people and nature and birds of Washington.   As soon as we get a little rest and recuperation, we’re hoping for another Tornado ride.

Meanwhile, back to the neighborhood….

Which has gone to the dogs and that’s a very good thing because these are very nice dogs and very nice Dogwalkers.

And in Seward Park this attractive plant decided to fruit. It’s an Indian Plum, a native that does well in wet areas of Northwest forests that are reasonably healthy. My knowledge of Botany is scanty in spite of the fact that my Mama tried to raise me right: Mama tried, Mama tried! She was a Botanist.