wrapping up 7 years of painting on whales starboard
13958
post-template-default,single,single-post,postid-13958,single-format-standard,theme-bridge,bridge-core-3.0.1,woocommerce-no-js,qode-page-transition-enabled,ajax_updown_fade,page_not_loaded,boxed,,side_area_uncovered_from_content,overlapping_content,columns-4,qode-child-theme-ver-1.0.0,qode-theme-ver-29.3,qode-theme-bridge,wpb-js-composer js-comp-ver-6.9.0,vc_responsive,elementor-default,elementor-kit-12768

wrapping up 7 years of painting on whales starboard 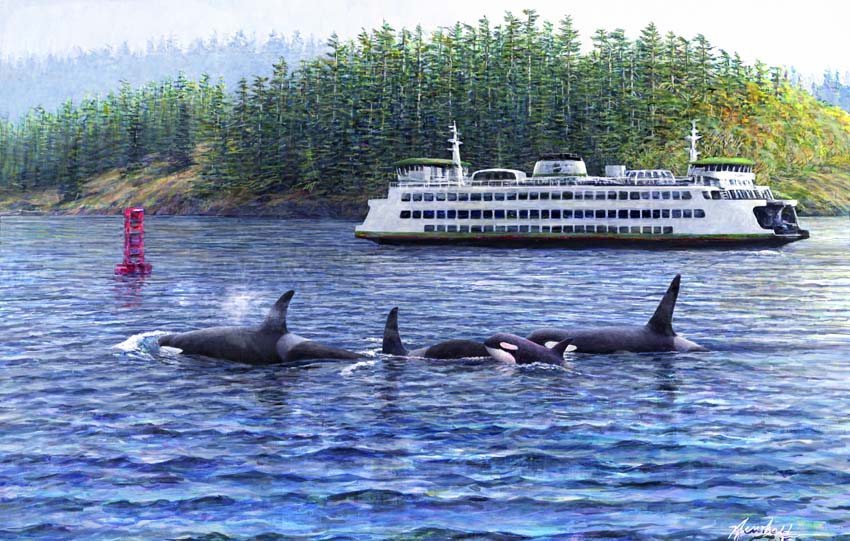 31 Mar wrapping up 7 years of painting on whales starboard

On a whim I published 7 or 10 digital prints of Whales Starboard sized at 24 x 36, by far the largest print I have ever published. I priced them at $60, and to my surprise, they are selling. But the print shop that was publishing them at reasonable prices and small quantities closed down, stranding the product.  On a second whim, I’ve decided to offset lithograph the print. This will allow us to sell it for even less than $60 in spite of the fact that the paper and image will be superior in all ways. My hope is that this will allow us to reach customers who have fairly large blank walls that they want to put fairly big art on but who don’t want to spend thousands of dollars at a gallery.

But this means it’s come time to wrap up painting on Whales Starboard, which I have been doing continuously since beginning it in 2015.  Either I am getting tired, (possible at my age) or Whales Starboard is beginning to look like it is supposed to look. Here it is today. I want to blast ahead and have this under the lights at Olympus Press within a month. Although looking at this I see some tree trunks that need a lot of work.

I also hope to publish Hummingbirds of Costa Rica along with two others before the summer cruise-Ship season. What? The Cruise-Ship season has been canceled? Do you have any rope? Just kidding. I’ve been working on this one for 14 years and this is what it looks like right now, except I can’t get the file to not have a garish green-shift. I hope to figure out what’s wrong with my jpg and get this image up soon. Tech: so easy and so easy for things not to work also.

Oh, did I mention Bats of Washington? I got to first-finish on that! I always get excited about new projects and imagine I will put energy into a promotional effort when it is done, but instead I usually just move on to the next project and skip the promotional effort, which I’m no good at anyway. Above is what Bats of Washington (available at the store in 8 x 10 and digital prints 14 x 18 that have a thin backstock) looks like after a winter of work:

I added headlands to “Hole-in-the-wall Gang!” to give company to Stricker Rock, the one which has a hole in it. I wanted headlands with fir trees on them so the print would have a NW feel. You wouldn’t believe the draconian permitting process I had to go through just to dredge up and move a few tiny islands off the coast. (attempted joke). Available in 12 x 16 as well as smaller sizes at the store.

I’m still working on the upcoming skinny, Specialty birds of South Texas.  Here is a Greater Kiskadee that is still in the brush-on-board (oldstyle) stage of painting.

Here is the last painting for this to get underway, the Altamira Oriole. Orioles can be hard and this needs a lot of work.

White-tailed Kites are the top image of this skinny and I’ve been trying on the computer to get them into shape for that. Like all my work since I found clone-stamping on the computer, this painting is representative of the question my work is raising in my own mind: Can paintings be “photographic” without being realistic or even good? Am I nailing the paintings down too much? A million art critics might say yes, but what does the market (meaning, my customers!) think? And what do I think? Strangely, I have no idea yet. I’m following a trail of my own desire, as in, “I want to get rid of this or that “halo” around this or that painted object.” Halos occur when the paint used for the subject goes past the boundary and into the sky, say. It’s impossible to get rid of halos in oil or acrylic, but very possible to eliminate them in Photoshop. But is it a good impulse? Should I be going for “painterly” instead? But now, in our brave new world, I could probably download software that would make my paintings look “painterly.” I have never used or been curious about any of these programs, but will they ultimately even deconstruct what used to be so good about looking “painterly?”

Who knows? I’m just going to keep on working for now.