Wrapping up an eclectic painting year

Posted at 05:15h in On the Easel by EdNewbold 0 Comments
0 Likes

I started a painting of Sunrise Point at Mt. Rainier in 2012 and published it that same year.  It had an American Kestrel sitting on a snag, foothills in the background and Mt. Rainier on the left.  I liked it, but the customers didn’t respond at all.

So as I always do, I put it in the back of my mind and went on to other projects.  I began mulling the idea of putting a Wolverine in and changing the Kestrel to a Gray Jay.  There were lots of pros and cons to that idea, but since I was getting absolutely nothing in the way of positive energy from the existing print, I switched the Kestrel for the Gray Jay.  Below is the original version.

Both birds are relatively common in the high alpine around Mt. Rainier, and the Kestrel  seemed to have the advantage of being colorful and handsome.  But artistically, it seemed, the Kestrel didn’t carry enough weight to anchor the painting.  Wolverines have adequate weight but completely lack color, have little familiarity for people, and what could be most fatal to this paintings future, can be confused with Bears.  So I’m crossing my fingers.

Wolverines are only at Rainier now hypothetically.  In point of fact, Wolverines are pretty mobile and can theoretically show up anywhere.  One was hit by a train in Walla Walla in the 60s, so Rainier is no stretch, and I’m painting the painting of Sunrise Point sans the road, so I guess it’s prior to whenever that was built—the thirties?  In any case, there’s no problem with having a Wolverine there except that it’s nothing any potential buyer will have ever experienced.

My neighbor Paul at Pike Place Nuts has seen two Wolverines in the wild, not me though.  The only time I ever saw Wolverines in any situation was back in the 80s.  I was down around Eatonville somewhere where someone had about 12 in an acre-enclosure.  He had paid Alaskan trappers to ship them to him in Eatonville rather than kill them when they caught them.   I was surprised at how happy and playful the whole lot seemed to be.  What with their reputation, I sort of expected they would all be tearing each other apart, but they were having a grand old time playing chasing games instead.

So now I’m at first finish and the shot here is what it looks like.  I think I will bring the original, which is huge, down to the store and display it and see if that might stir up any excitement.  It will be available also in three sizes of skinny.

I’m also finishing up my Sharks of the NW poster.  I think this is the absolute final, will be going to press down at Seatac (Olympus Press) with that at 14 x 18 to add to my huge collection of available natural history posters in 14 x 18.  This is what that image will look like. 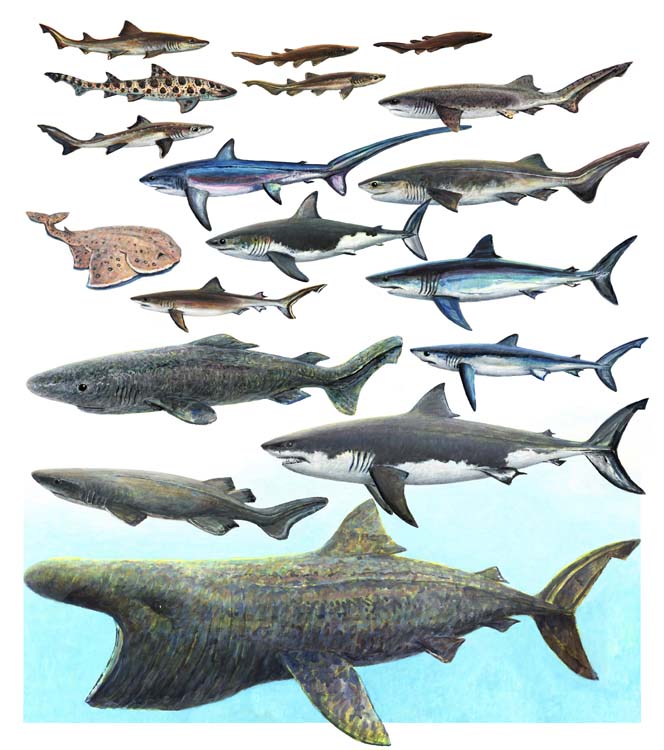 I was in a stew about Poulsbo for a long time.  I finally made the decision to go back to the painting and repaint the whole thing.  I enlarged the line of ducks considerably, and I added mountains peaking over the line of hills in the background, plus I worked on everything. 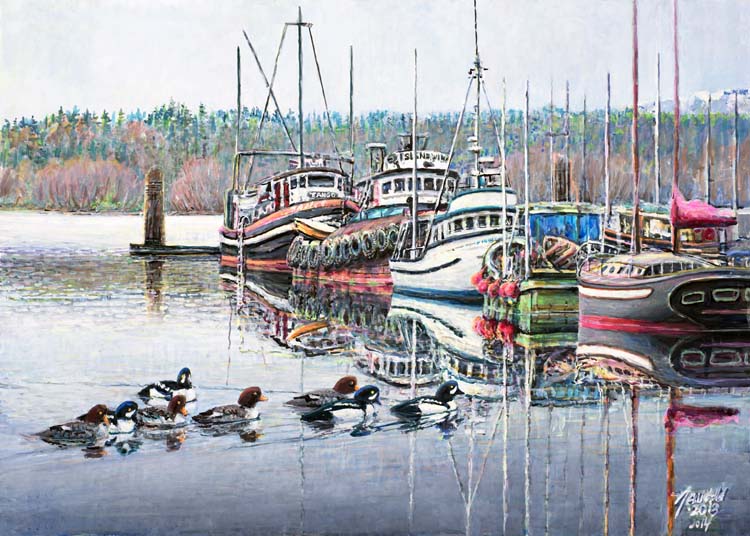 Now I have to fuss with this for a month of so on the computer.  The hills went too colorful on me, I have to fix that, fix the Goldeneye, which are crude at this point, there are a few minor other problems, but I am delighted with this and am optimistic it will eventually do well.

I liked the Jaguar rework so much I started a Cougar portrait, this is how that’s going: 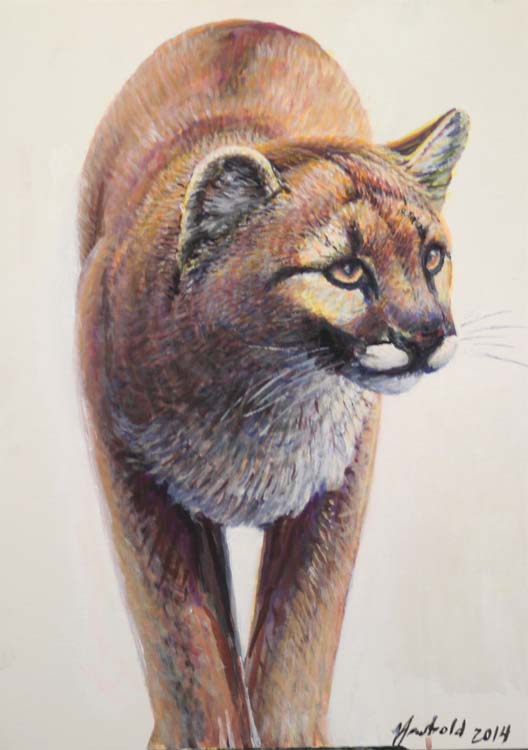 I’m also working Bottle Beach, I love the painting but I’m up against the fact, that seemingly, the camera hates it.  Often the print will exceed or equal an original easily.  Not so with this painting.  I love the original, but hate the prints.  I think that means I have lots of computer work to do.

That same problem is plaguing my big Orca skinny, which I am working on for it’s second edition.  I’v e put lots of work into that but prototypes have come out of the printers drenched blue time and again.  Will get it eventually.

I have high hopes for Birds of Seattle’s Upland neighborhoods, that’s already doing well, but I want to work on it more before going to press.  This is what it looks like now:

(BTW, I appreciate comments on this blog, but have a spam-blocker.  Let me know at ednewbold1@yahoo.com if you have commented and I’ll unblock it.) 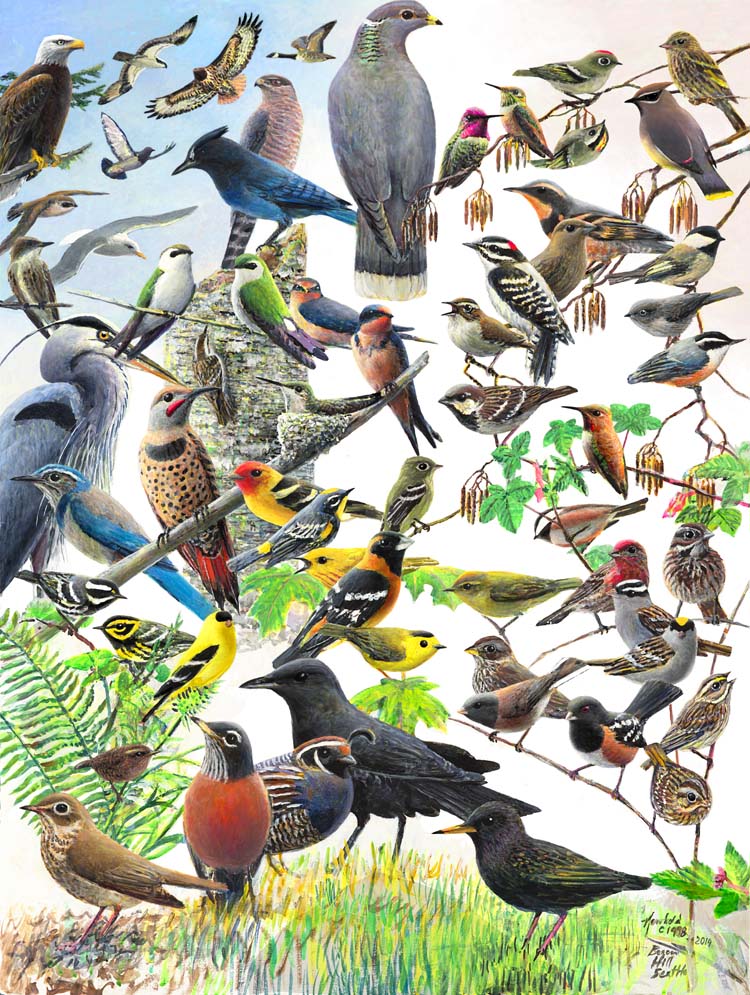