You should have seen the ones that got away!
14098
post-template-default,single,single-post,postid-14098,single-format-standard,theme-bridge,bridge-core-3.0.1,woocommerce-no-js,qode-page-transition-enabled,ajax_updown_fade,page_not_loaded,boxed,,side_area_uncovered_from_content,overlapping_content,columns-4,qode-child-theme-ver-1.0.0,qode-theme-ver-29.2,qode-theme-bridge,wpb-js-composer js-comp-ver-6.9.0,vc_responsive,elementor-default,elementor-kit-12768

You should have seen the ones that got away! 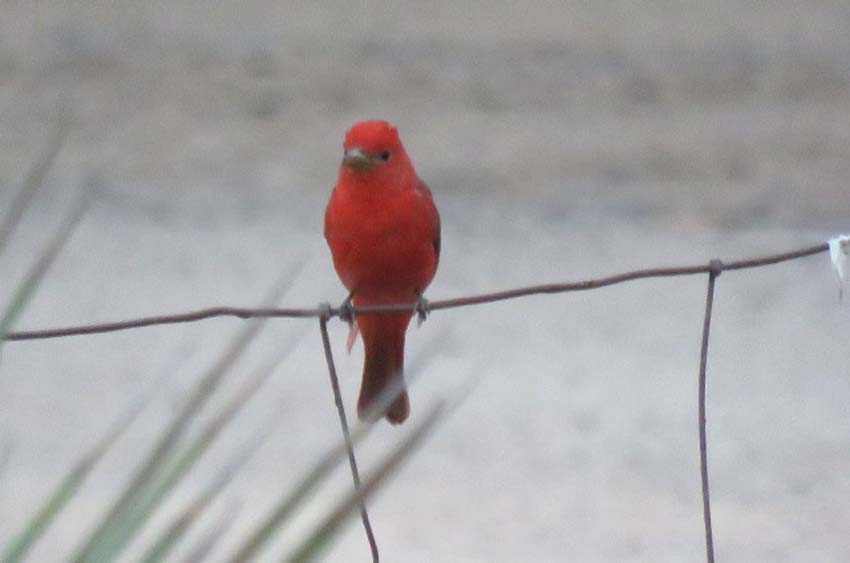 20 May You should have seen the ones that got away!

Posted at 22:27h in sightings by EdNewbold 0 Comments
0 Likes

Posted May 20, 2021 from the central Peloncillo Mtns, New Mexico

We are down in the Bootheel again.

Delia and I went over to Portal, Arizona on May 18th chasing birds and Nature. One of our last stops was Cave Creek Ranch, a beautiful birder’s resort with a feeder operation.

This Summer Tanager came in and sat for portraits. A bird of big trees, Summers don’t always pose out in the open like that and I was delighted.

To stick with the Red-Bird theme, we began the day at Bob Rodriguez’s-feeder-and-habitat operation downstream from Portal. You don’t have to even guess which NFL team this bird is rooting for this year (Arizona Cardinals).  I know so little, but I wonder if they will ever call the Southwestern Cardinal a different species from the Eastern birds, they are so clearly on steroids. uh hum…someone should look into that.

There was a flock of Turkey Vultures working low over Portal but one was actually a Zone-tailed Hawk that masquerades as a Vulture to avoid discovery by prey species.

There were large numbers of Western Tanagers on the move in the region for about 3 or 4 days. Here 5 males crowd Bob Rodriguez’s feeders.

It was surprising the number of Westerns everywhere including at the ranch. Here’s one looking pensive about the old days when it got by fine without handouts.

We walked up the South Fork of Cave Creek. This was a slightly uncooperative Painted Redstart. Delia found a Sulphur-bellied Flycatcher..

We got a life-bird this visit, but no pictures to show for it. This shot is from Wiki-commons, by Alan Schmierer. We were driving home on the 18th as dusk gave way to night and were happy to see multiple Lesser Nighthawks cruising low and fast over the range.  As we drove up the canyon, we watched a Gray Fox cross the road. No photo. Then we stopped for a Poorwill that was sitting in the road until I tried to get a photo and it helicoptered off as Poorwills do. Next in full darkness we rounded a bend we saw in the headlight beams a much bigger bird with bold patterning, including two big white crescents on its tail set off by black patches. It was in crazy acrobatic flight after some insect.  This is all you really need around here to nail down the ID of a Mexican Whip-poor-will, the first one Delia or I have ever encountered and a truly magnificent creature.  (It is very similar to the Whip-poor-will, also a magnificent creature and one featured in many songs of an earlier America, but which does not occur here.)

Everybody is thirsty down here. This Javelina was drinking from a birdbath at Bob’s place.

I had to lie down on the ground to get this shot of a Blacktail Rattlesnake.  It looks like it’s approaching, but actually it was sunbathing.

This is “Pinky,” an about 4.5 ft Western Diamondback that was across the driveway from the house. Everybody is praying for rain so nobody gets cranky.

Here is a Thick-billed Kingbird that’s been coming back to a territory in Portal for I think I heard someone say five years.

This is the longtime Ranch specialty bird, a Lucifer Hummingbird, stopping by at one of the feeders. It takes a great shot to convey the beauty of this bird the way it looks in real life–it’s diminutive size and spectacular, variable and high-contrast coloration, but at least this is diagnostic.

The White Cliffs under a hopeful sky. A Ranger greeting the public at the South Fork ranger station relayed a prediction of a good monsoon season. I can’t bear to think about it, and I get superstitious just writing this, so much is riding on it.

Well, it’s time to leave already, here is a shot of the gate we will go through to leave the ranch.  I had no idea of this until this visit but Rodeo, NM used to be on a train line and have a stockyard.  When Delia’s parents were building the house circa 1975, they asked to use the wood from the recently abandoned stockyard, which was being tossed. Not only that, but Delia actually did some of the grunt work, gathering and loading the lumber. Among the pieces they got was the main gate and this is it. “Bob and Katie would never have built a gate that big,” Delia pointed out when I expressed surprise.

At the house, I found this shot –from somewhat near the time she was hauling lumber– of Delia. The woman she is with is Leticia (last name, sorry) , a co-worker on a Cancer Prevention Education Team that traveled around new Mexico in 1977-79,

Sorry because of bots no comments are possible. I’d love to hear feedback at ednewbold1@yahoo.com of course, for what it’s worth.